Sixteen months after taking office, Dr. Jonathan Holloway was ceremonially inaugurated as the 21st President of Rutgers, The State University of New Jersey, on November 5, 2021. The Rutgers community celebrated this historic investiture with two days of events, including an Excellence Fest street festival, a virtual academic panel on the value of public service hosted by President Holloway, and a formal inauguration ceremony at Jersey Mike’s Arena in Piscataway, livestreamed to gatherings on all Rutgers campuses.

The inauguration ushers in a year-long series of public events to be held across the university focused on the inaugural theme Rutgers: This is what Excellence looks like.

Watch the recording of the inauguration, download the program, or read the transcript of his speech. 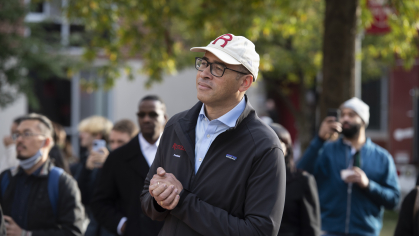 Read the poem Rutgers graduate Alyea Pierce recited to honor Jonathan Scott Holloway at the Excellence Fest street festival on the eve of his inauguration. 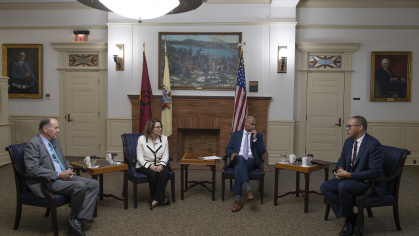 ... In Service to the Common Good 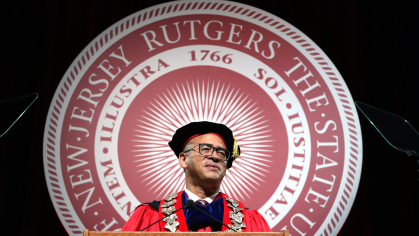 A Celebration of Excellence

See a video highlighting all the events across Rutgers on November 4 and 5, 2021, marking the inauguration of President Holloway. 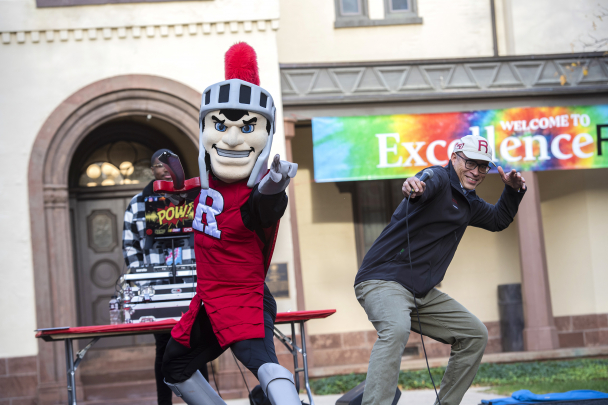 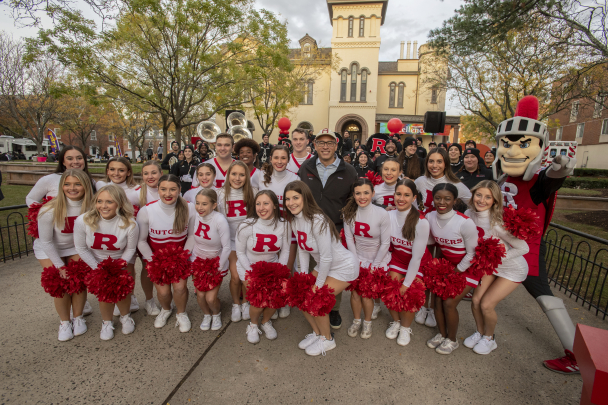 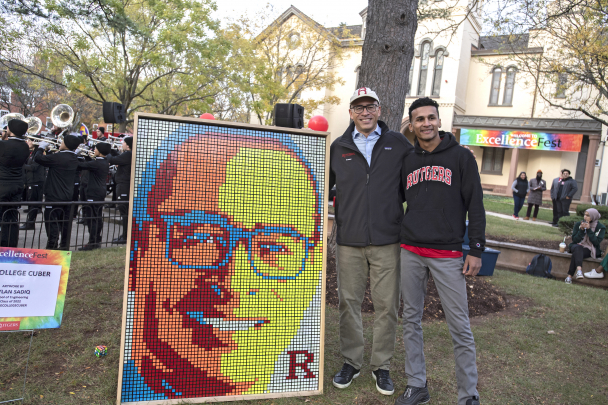 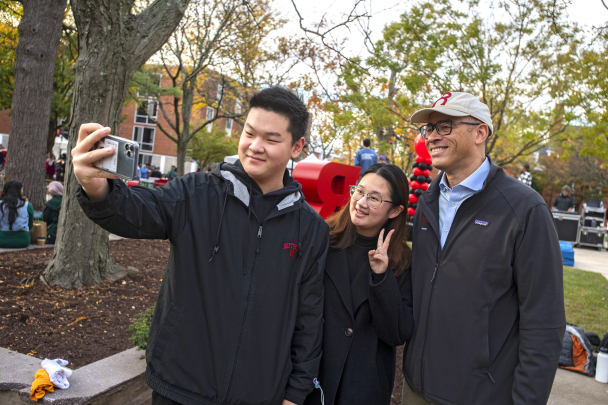 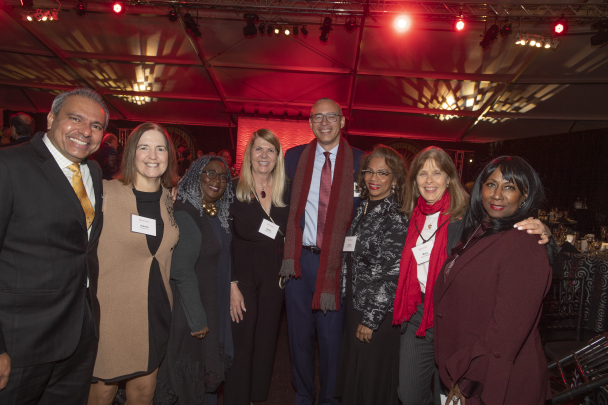 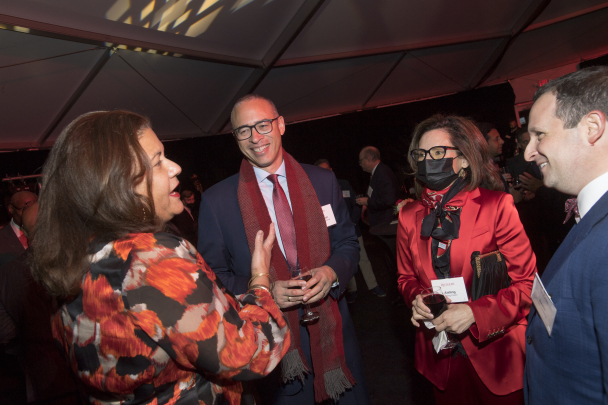 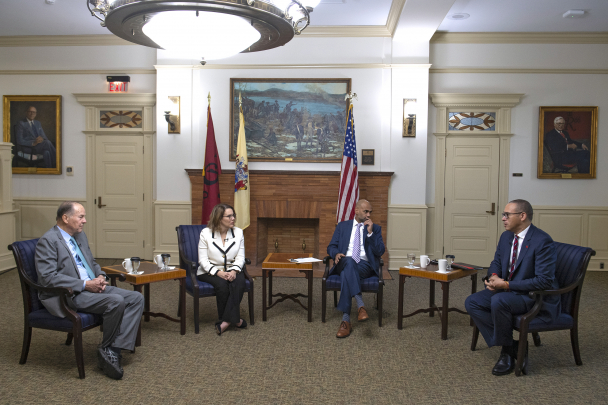 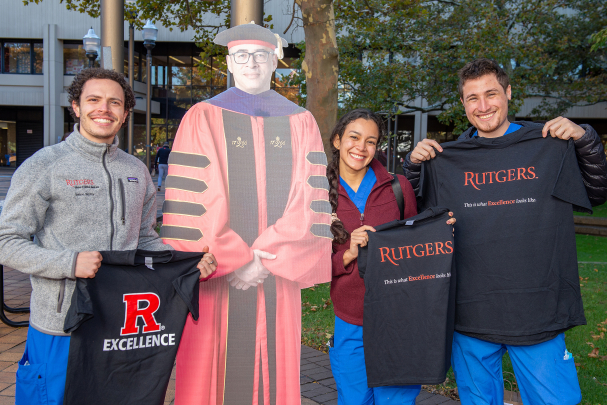 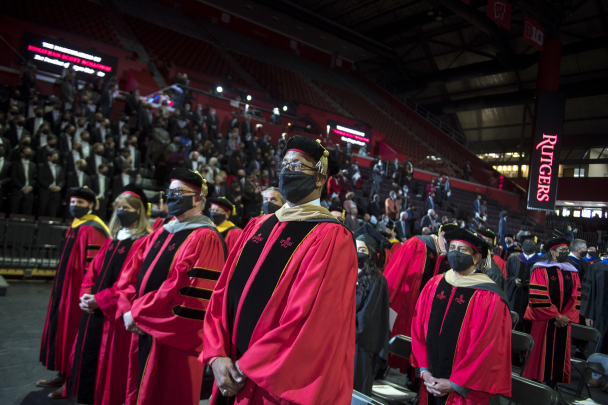 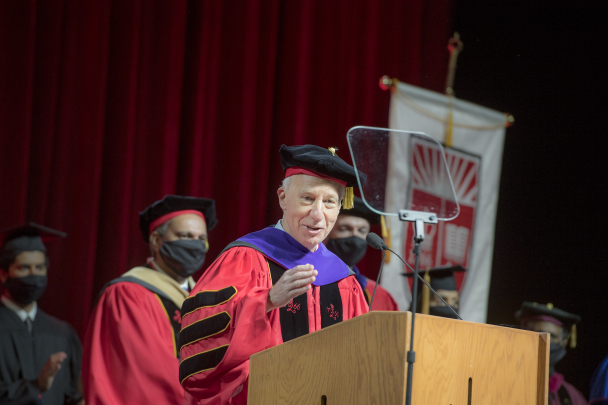 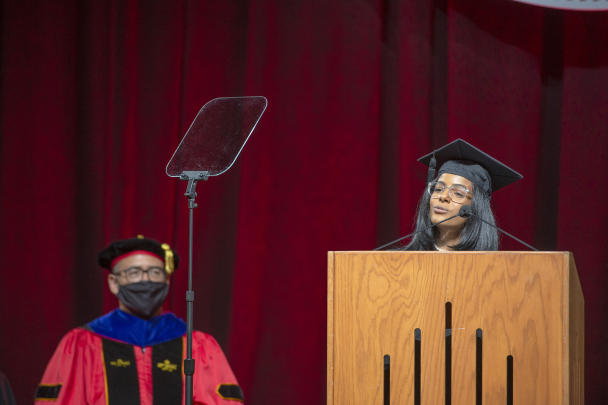 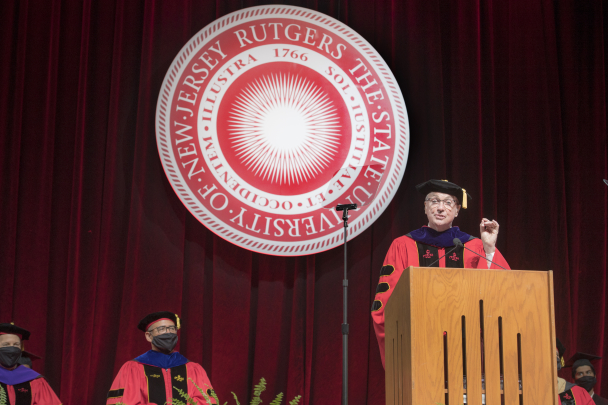 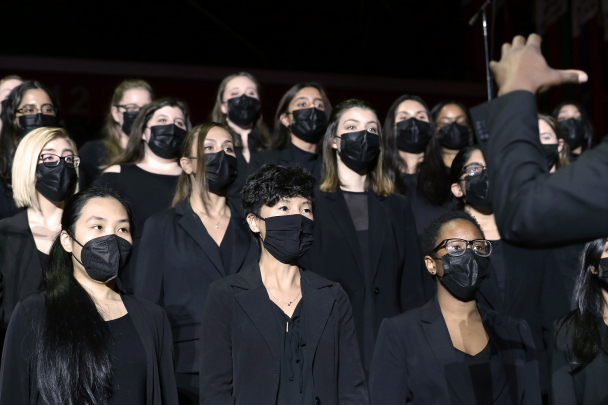 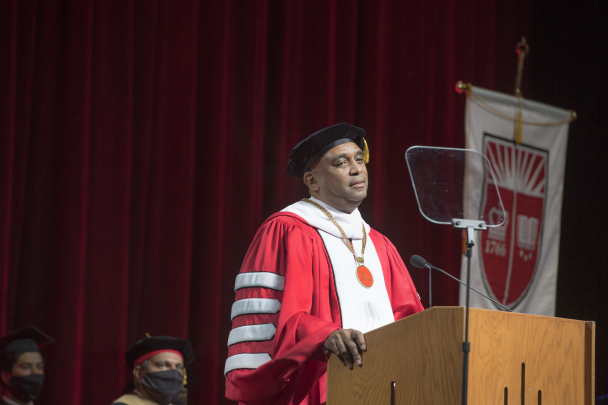 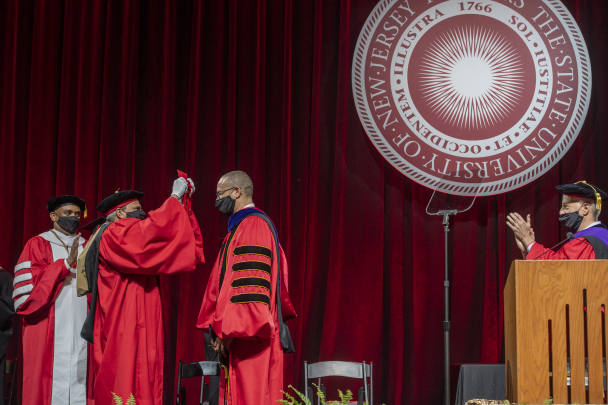 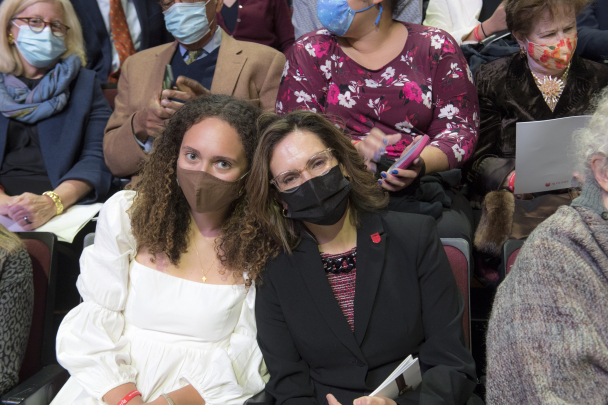 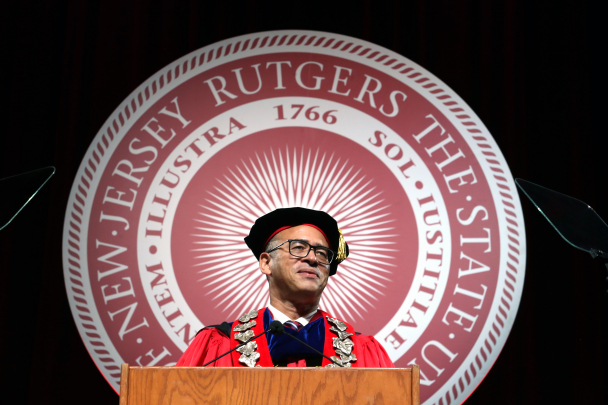 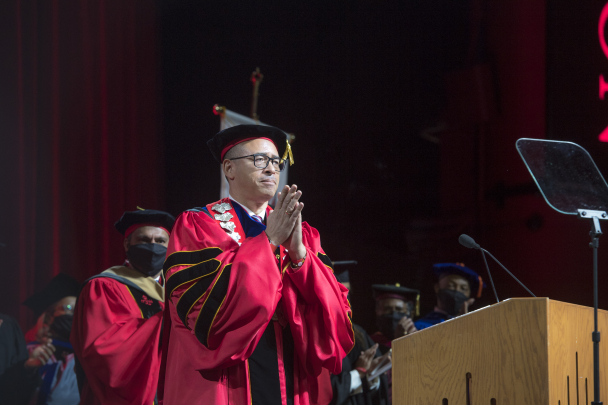 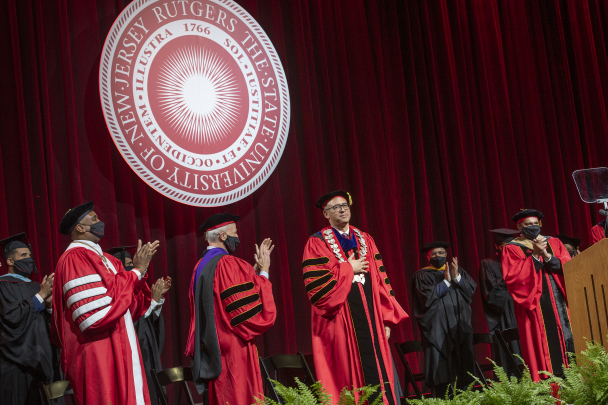 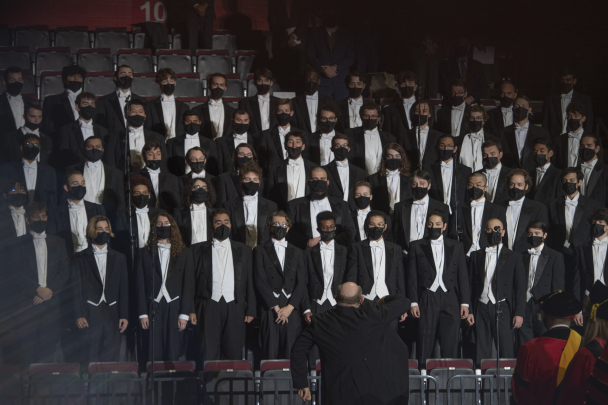 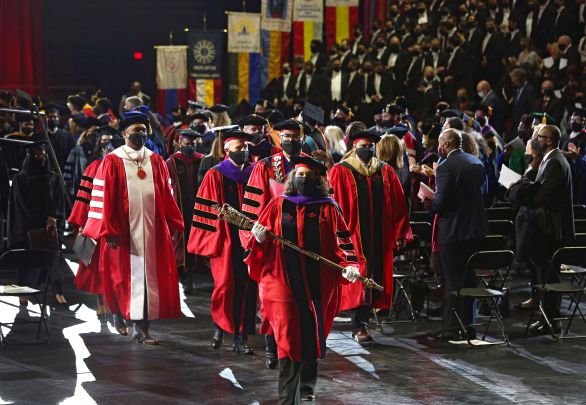 President Holloway has some fun with the Scarlet Knight on stage at Excellence Fest, a community street festival featuring performances, games, food, and music, held on Thursday, November 4.

Jonathan Holloway poses with the cheerleading squad at Excellence Fest.

President Holloway poses with students for selfies at Excellence Fest.

Guests pose with President Holloway at the beginning of the Inauguration Dinner held in the President’s Tent the evening before the ceremony.

Elizabeth Alexander, president of the Andrew Mellon Foundation, speaks with President Holloway, his wife Aisling Colón, and another guest at the Inauguration Dinner.

The inauguration processional participants include Rutgers faculty and staff and delegates of other colleges and universities from New Jersey and across the nation.

Chair of the Board of Governors Mark Angelson offers welcoming remarks to the inauguration audience.

On behalf of Rutgers students, Susan Badia, Class of 2022 and recipient of a Scarlet Promise Grant, delivers remarks at the inauguration.

Rutgers University Voorhees Choir sings the hymn "Will the Circle Be Unbroken?" under the direction of Brandon Williams.

Dwight McBride, president of The New School, gives the keynote address and leads the audience in the first verse of the Black national anthem, "Lift Every Voice and Sing," in an emotional moment during the ceremony.

Tilak Lal, chair of the Board of Trustees, presents the Presidential Medallion to Jonathan Scott Holloway.

Jonathan Scott Holloway delivers his inaugural address, sharing, “When I look at Rutgers, I want to see a place that aspires boldly to be both a leading engine of world-changing research and a vehicle for social mobility for students across the socioeconomic spectrum. This is what excellence looks like.”

President Holloway thanks the Rutgers community as he finishes his inaugural address.

President Holloway receives a standing ovation at the conclusion of his inaugural address.

The Rutgers University Glee Club performs "On the Banks of the Old Raritan," Rutgers’ alma mater, with Patrick Gardner conducting.

Kimberlee Pastva, secretary of the university, carries the university mace, an ornamental staff symbolizing the authority of the president, and leads the recessional at the end of the ceremony.