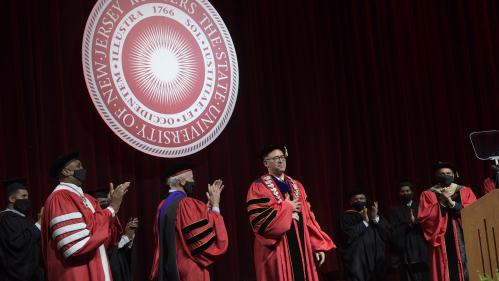 Holloway outlines a focus on access, research and service in inaugural address

Jonathan Scott Holloway, whose tenure is being shaped by a profound political reckoning and other global challenges, told an audience gathered for his inauguration as Rutgers’ 21st president that he believes education paired with public service can save democracy as he announced initiatives to make the university a leader in serving the common good.

“Our daily news cycles have left us with a national rhetoric about politics, knowledge, citizenship and service that seems to take delight in mocking efforts to shore up institutions, to pursue ideas, to disagree civilly, to serve the common good and to share in our wealth,’’ Holloway said in his address, which was livestreamed at watch parties on the Rutgers-New Brunswick, Rutgers-Newark, Rutgers-Camden and Rutgers Biomedical and Health Sciences campuses. “I despair at this state of affairs, but instead of seeing colleges and universities as a manifestation of all that is wrong in our society, I see them as all that can be right.’’

Holloway highlighted his belief in the excellence that exists at Rutgers and his plans to build toward something even greater as he outlined his vision that focuses on access, research and service.

“When I look at Rutgers, I want to see a place that aspires boldly to be both a leading engine of world-changing research and a vehicle for social mobility for students across the socioeconomic spectrum,” Holloway said. “This is what excellence looks like.”

Holloway’s inauguration, traditionally the official installation of the president, took place more than a year after he joined Rutgers due to the COVID-19 pandemic. The two-day celebration, which included an Excellence Fest on the Rutgers-New Brunswick campus Thursday and a virtual academic panel discussion on the value of public service moderated by Holloway earlier Friday, kicks off yearlong events highlighting excellence across the university.

Dwight McBride, president of The New School who gave the keynote address, brought the audience to its feet to sing the first verse of the Black national anthem, Lift Every Voice and Sing, in an emotional moment during Friday's ceremony. Other speakers included Rutgers students and alumni, Rutgers Board of Governors Chair Mark Angelson, New Jersey Gov. Phil Murphy and professors and administrators representing Rutgers-New Brunswick, Rutgers-Newark, Rutgers-Camden and Rutgers Biomedical and Health Sciences.

Part of Holloway’s plan for focusing on access to education includes raising $50 million to support the Scarlet Promise Grants, a student need-based aid program that he said will build a pathway to a better world. The program – which provides undergraduate scholarships and emergency, temporary relief to those facing unexpected hardship – has been a focus of Holloway’s since his first day as university president July 1, 2020, when he announced a $10 million campaign for the program that is now complete.

“I have seen the great work that it can do, I have seen your enthusiasm for it and now, together, we are going to make a powerful statement to our students about how much we believe in them and their ability to change the world,” Holloway said.

He also announced the creation of the Rutgers Summer Service initiative, administered by the Eagleton Institute of Politics and Rutgers Career Exploration and Success, which will offer up to 150 second- and third-year students paid summer public service internships working for nonprofit organizations.

“Students will work for nonprofits, serve the broader community and gain the opportunity to learn about people who are unlike themselves – who face different struggles and come from different backgrounds, countries, races or religions,” said Holloway, a prominent historian whose scholarly work focuses on post-emancipation U.S. history. “Participating in this program will make our students better citizens and our world a better place.”

Research “in service to the common good” is also an initiative that Holloway has put at the top of Rutgers’ priorities. The $900 million that researchers at Rutgers received last year from the federal and state government, corporate partners, foundations and associations provided access to COVID-19 testing for underserved and vulnerable communities, a research hub for large-scale coastlines science, grants to help students and teachers improve STEM learning, robotics research, a new Institute for the Study of Global Racial Justice and, most recently, the New Brunswick Innovation and Technology Hub.

“Today it's a hole across from the New Brunswick train station,” Holloway said about the new technology hub. “Soon it will be an epicenter of innovation: a new site for Rutgers Robert Wood Johnson Medical School; home to cutting-edge laboratories; space for collaborations with our colleagues at Princeton and with business partners including the two largest hospital systems in the state; and an incubator for the next generation of scientific advances in New Jersey.”

Addressing the social and political issues faced today, Holloway told those attending the celebration about an incident during his first months as a graduate student and a Ford Foundation Fellow. While listening to the keynote address delivered by A. Leon Higginbotham, a major civil rights advocate who had just been appointed Chief Judge of the United States Court of Appeals for the Third Circuit, an earthquake struck. Comparing the quest for racial justice in education to the building of a cathedral, Higginbotham told the graduate students the work would take generations to realize.

"I believe in looking at the work before us as akin to the building of that metaphorical cathedral,” said Holloway, whose great grandfather William Johnson Trent, a sharecropper in his youth, became President of Livingstone College, a private, predominately black school in Salisbury, North Carolina. “I believe that as we go about our daily work we must always honor those who came before us, who also worked on this structure, and whose names may be lost to history. I believe that we must remain vigilant, aware that at any moment something can come along that could stress its walls, that could compromise its roof, or that could crack its foundation.”

While institutions of higher education like Rutgers are not perfect structures, could always do better and must strive for excellence, he said they should be commended for training workforces, preserving cultural heritages and addressing society’s most difficult challenges through research, advocacy and education. They are anchor institutions, large employers, summer camps, the hometown team, local hospitals, and community event spaces, Holloway said.

“I know that there are skeptics who take delight in pointing out all the ways in which Rutgers doesn't execute perfectly. I wish I could say that the skeptics are always wrong, but they aren't. Rutgers remains a work in progress, and like any cathedral is never truly finished,” Holloway said. “But in my administration, I will continue to call upon our better spirits and present a new narrative about this university, one that points to the abundant excellence that is already here and the excellence that it can attain if we find ways to believe in ourselves. Yes, we may not complete the cathedral, but we will be steadfast in attending to the work that will ensure that Rutgers is and will continue to be a sight to behold, a beacon that others will admire and to which others will look as they engage in their efforts to build a better world.” 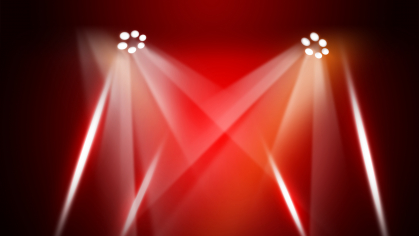 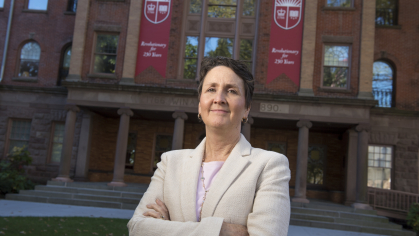 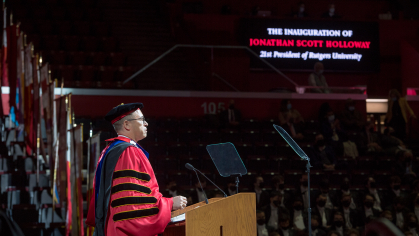 The Inauguration of Jonathan Scott Holloway in Pictures