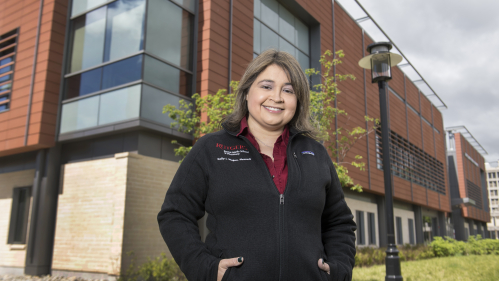 At age 44, Kelly Magee is about to fulfill a long-sought goal of earning a doctor of pharmacy degree at Rutgers Ernest Mario School of Pharmacy.
Nick Romanenko/Rutgers University

Growing up with type 1 diabetes and twice-a-day insulin injections, Kelly Magee spent a lot of her childhood in pharmacies, marveling at shelves stocked with medications and the white-coated pharmacists who spoke with her mom. In high school, Magee considered pursuing a career in pharmacy, but an interest in television won out.

“I didn’t have to take organic chemistry for media, so that’s what I did,” Magee admitted with a laugh.

While earning college degrees in communication, Magee worked at a pharmacy. And when she realized television production wasn’t for her after three years in the field, Magee again set her sights on pharmacy. “It seemed to me a career that could help a lot of people,” she said.

At age 44, Magee is about to fulfill a long-sought goal of earning a doctor of pharmacy degree at Rutgers Ernest Mario School of Pharmacy. “It’s been a long road. I’m proud I didn’t give up when things got hard for me,” Magee said.

The COVID-19 pandemic has only heightened her conviction about the importance of pharmacists. When even some medical offices closed in the spring of 2020, pharmacy workers were on the front lines, dispensing information as well as medications. “A lot of people couldn’t go to their doctors, so we were the resource they turned to,” said Magee, who has interned at a Walgreens pharmacy since 2017. “The experience has made me feel even more useful.”

Magee did three rotations at Robert Wood Johnson University Hospital Somerset during the pandemic, and participated in COVID-19 research. Since December, she has given COVID-19 vaccines to correction facilities workers, educators, and the public.

Tasked with collecting medication histories during her emergency care rotation, Magee chatted warmly with patients who arrived alone at the hospital because of pandemic restrictions. “She listened to what they had to say, and was always kind,” Assistant Professor May Nguyen said.

Shifting to online classes when the pandemic hit was tough, Magee recalled. “I remember walking out that last day before spring break, looking back, and thinking 'I’m never coming back here.' ” What she missed most was the camaraderie. “We call ourselves a ‘pharmily,’ ” she said. When classes went virtual, “we didn’t have that togetherness; it was lonely.”

Magee was 33 years old and working for an environmental company when she began taking prerequisite courses to get into pharmacy school. In 2016, she earned a second associate’s degree in pre-pharmacy studies and applied to doctoral programs.

“I was thrilled to get accepted to Rutgers. It has such a strong reputation because of the quality of professors” Magee said. “When you see Ernest Mario School of Pharmacy, that means something.”

Magee is “an excellent student who pays great attention to detail,” Nguyen said. “It’s challenging to change your life,” she noted. “What Kelly has done is amazing, and I applaud her.”

Nguyen invited Magee to participate in a research initiative investigating the impact of intravenous fluid resuscitation on COVID-19 patients. The retrospective study involved reviewing the charts of 637 patients who were treated for the virus between March 1 and June 1 of 2020. When the pandemic first hit, COVID-19 patients received the fluid treatment a patient with sepsis would, Nguyen noted.

Magee and the other researchers tracked patients’ intravenous fluid intake and other interventions they received. The goal was to establish a more streamlined protocol, she said. In the end, the study showed fluids had only a limited impact. “Helpful, but it wasn’t that one thing that stopped people from dying,” Magee said. She helped Nguyen create a poster on the study’s findings that they presented at a meeting of pharmacists in December, Nguyen said.

“Kelly did this in addition to her full rotation duties,” Nguyen said. “It was very impressive for her to take on all this.”

After graduation, Magee plans to work in pharmaceutical marketing as an account manager for RevHealth in Morristown, a position that she says “combines my two careers.” But Magee, who is moving to Somerset with her husband this spring, isn’t giving up her time behind the counter just yet. She plans to continue putting in shifts at the pharmacy, too. “I don’t want to lose that relationship with patients,” she said.