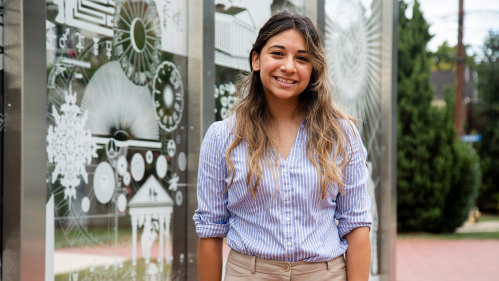 President Jonathan Holloway calls Rutgers-Camden senior Tania Martinez the “busiest person in Camden.” And for good reason. A triple major in political science, philosophy, and global studies with a minor in Spanish, Martinez is a Civic Scholar, president of the campus’s College Democrats, a member of the Institute for Leadership and Action, and chair of the Immigrant Refugee Caucus; she also helped launch “Voices of Immigration,” an interdisciplinary research podcast that focuses on the student experiences of various generations of immigrants.

In this episode of Faces & Voices, Martinez walks Holloway through the quad to Rutgers-Camden Alumni House where they discuss what drew her from Springdale, Arkansas, to Camden, New Jersey, how Rutgers-Camden’s deep commitment to civic engagement has allowed her to make meaningful differences in the lives of others as an immigrant rights activist, and the importance of cultivating hope in the midst of daunting circumstances.