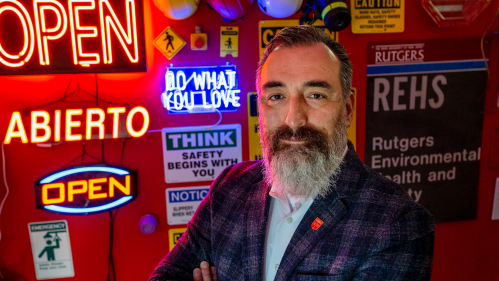 The observation that Alejandro “Alex” Ruiz is “everywhere at Rutgers” is more than a functional assessment of his role, it’s the result of an approach that’s mindful of the past, engaged in the present and prepared for the future.

Born in New York City’s Washington Heights neighborhood to an immigrant family that fled Colombia’s civil unrest, Ruiz cites his parents’ perseverance as the driving motivation in a life journey that includes 22 years of service to Rutgers. Although much has changed since his arrival on campus, the impact of hard work and a positive attitude has not, which has enabled the Plainfield resident to build relationships and achieve goals.

“I have been able to create a great network with other like-minded individuals to support the university and its community,” said Ruiz. “I was brought up with the philosophy to never say that something isn’t my job. My job is to connect you with someone who can [help].”

On Tuesday, February 8, President Jonathan Holloway visited with Ruiz at the environmental health and safety offices, located on the Livingston campus in converted barracks of the former Camp Kilmer, a U.S. Army camp that became the largest processing center for troops heading overseas and returning from World War II.

Although the minimalist setting required enhancement for the shoot, the conversation required no such intervention. Among the topics discussed were directing an essential workforce in unprecedented times, professional development and mentoring, work-life balance, and the significance of collaboration in the support of a major research institution.

We are reminded that a beloved community begins with the individual, and that the smallest connections often drive the largest achievements.