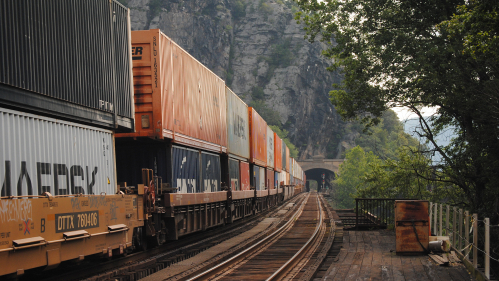 Washington is trying to prevent more than 100,000 freight railroad workers from going on strike at the height of the holiday season.

At the urging of President Biden, the U.S. Senate passed legislation today that would force a tentative contract agreement between the rail unions and their employers. The deal, approved by the House Wednesday, calls for a 24 percent raise over five years, immediate payouts averaging $11,000 and an extra paid day off.

In a separate resolution addressing one of the workers’ primary demands, the House approved seven days of paid sick leave – a provision that failed to advance in the Senate.

The federal government’s intervention puts Biden and other pro-union Democrats at odds with some of their usual supporters in the labor movement. Assistant Professor Todd Vachon, director of the Labor Education Action Research Network  in the School of Management and Labor Relations, talked to Rutgers Today about the dispute.

What are the potential consequences of a strike?

The cost of a railway shutdown has been estimated to be $2 billion per day and could lead to millions of job losses in the first week of a strike. One-third of the nation’s grain, three-fourths of new automobiles and countless other natural resources and commodities are shipped by rail. Cutting off that flow for even a few days would have a ripple effect throughout the entire economy and would certainly frustrate a lot of holiday plans this time of year.

What is the disagreement over the proposed contract about?

The ongoing dispute revolves around work-life balance issues, including scheduling, time off and adequate staffing. The industry has been cutting staff despite reaping soaring profits for many years. For rail workers, this has meant longer hours, more time away from home and always being on call. The pandemic really brought these issues to a head when sick workers lacked paid sick time away from work. According to the Bureau of Labor Statistics, private sector workers, on average, receive seven to eight days of sick leave per year. New Jersey has a state law requiring the provision of paid sick leave. Rail workers have zero.

How did Congress and the president get involved in settling the dispute? What is their role with the unions?

Labor relations in the railroad and airline industries are governed by a specific piece of federal labor law known as the Railway Labor Act (RLA). Unlike the National Labor Relations Act, which establishes labor law for the entire private sector, or the various state laws that govern public sector labor relations, the RLA has a long process that involves cooling off periods, mediation and even government intervention before allowing a strike to occur. In September, the president got involved in negotiations and brokered a tentative agreement to avert a strike before the midterm elections. In the weeks since then, the 12 rail unions have been individually voting on whether to accept the terms of that agreement. Four unions, representing just over half of the 115,000 rail workers, have voted “no,” which re-opened the pathway for a strike if the unions and employers cannot come to a new agreement that addresseS the workers’ lingering concerns by December 9.

Is Congressional action to settle the dispute bad for labor? Is this union busting?

The right to strike is a fundamental right in a free society. By stepping in to avert a strike before the deadline arrives, the president and Congress are taking away that right and undermining the root source of the unions’ bargaining power. It’s important to remember that workers generally don’t want to go on strike, but in cases where the issues are very important to them, they have the ability to use that tool to pressure employers to make changes. The rail workers have demonstrated repeatedly, through democratic elections, that they care enough about the work-life balance issues that they are willing to strike.

By all accounts, the highly profitable rail operators can easily afford to offer paid time off, but they choose instead to use their revenue to buy back stocks and offer large dividends to shareholders. By pre-cancelling the strike, the federal government effectively sides with the employers and wealthy shareholders at the expense of the workers. These are not the actions of a “pro-labor” president.