What Is Court Packing? 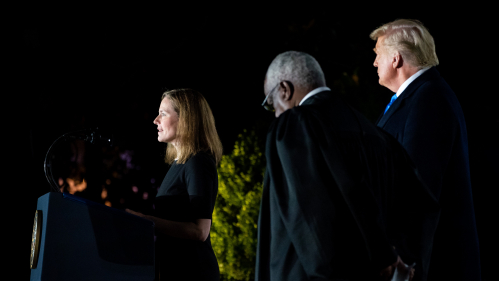 The confirmation of Supreme Court Associate Justice Amy Coney Barrett eight days before the election by a partisan 52-48 vote has renewed questions about whether Democrats will try to increase the number of justices on the country’s highest court. The move is particularly polarizing because Republicans refused to consider President Obama's nominee Merrick Garland to fill a vacancy that occurred nine months before the 2016 election, but rushed to fill the seat following the death of liberal stalwart Ruth Bader Ginsburg.

Rutgers Law School professor David Noll, whose scholarship and writing focus on the federal courts, explains the issues at the heart of the debate and how Republicans share the blame for the prospect of an expanded Supreme Court.

What does it mean to pack the courts, is it the appropriate response and would it make the courts less of a partisan battleground issue?

People often use "court packing" to describe changes to the size of the Supreme Court, but it's better understood as any effort to manipulate the Court's membership for partisan ends. A political party that's engaged in court packing will usually violate norms that govern who is appointed (e.g., only appoint jurists who respect precedent) and how the appointment process works (e.g., no appointments during a presidential election).

Seen from this perspective, the Barrett appointment is classic court packing. The president nominated a hardline conservative who appears to question major parts of U.S. constitutional law. And the Senate majority changed its procedural rules – invented to deny Merrick Garland a hearing – to ram through the nomination as people were voting.

If Democrats respond to the Barrett appointment by expanding the size of the Court, the immediate effect will be to further diminish the Court's standing and make it hard for anyone to take the Supreme Court seriously.

Paradoxically, I think that's a good development. Restoring a sense of balance to the Court will require Republicans and Democrats to come together and agree on new rules for how justices are chosen and the kind of jurists who serve on the Court. As long as Republicans play hardball with the appointments process and Democrats fail to respond in kind, Republicans have no reason to come to the table. Why bargain when you are getting everything you want?

The Constitution is silent about the number of justices on the Supreme Court. Article III, section 1 provides simply that "[t]he judicial power of the United States, shall be vested in one Supreme Court, and in such inferior courts as the Congress may from time to time ordain and establish."

There is nothing sacrosanct about nine justices. Historically, the number of justices has varied between five and ten. The last change to the Court's size occurred following the Civil War, when Congress reduced the size of the Court to prevent President Andrew Johnson – an apologist for Southern segregationists –from appointing justices to the Court.

Has this ever been tried before (and why wasn't it successful)?

The last serious attempt to change the size of the Court was FDR's 1937 court packing plan. FDR proposed that plan in response to a series of Supreme Court decisions that struck down New Deal legislation. When he proposed the plan, FDR was already in a precarious political position. The plan failed in Congress, but it arguably succeeded in constraining the Court's attack on the New Deal.

After the court packing plan failed in Congress, Justice Willis Van Devanter – one of the "Four Horsemen" who led the Court's opposition to the New Deal – retired and was replaced by Hugo Black. Within a few years, seven of the Court's nine justices were FDR appointees.

What is the likelihood that Democrats could succeed at changing the number of Supreme Court justices?

I think it depends on how Democrats do in the race for the Senate. If Democrats win a bare majority of seats, the party is likely to focus on other priorities such as a COVID relief bill and voting rights legislation. If Democrats win 53 or 54 seats, it's far more likely that Congress will expand the Court.

How was the Republican-controlled Senate able to rush through Amy Comey Barrett’s confirmation while blocking Obama's nominee? Is it possible to prevent such partisan moves in the future?

For decades, the conservative legal movement has cultivated a network of lawyers who want to serve as judges. The Trump administration effectively outsourced selection of Supreme Court nominees to the movement's leaders, eliminating the need for the White House to identify and vet nominees.

In 2013, the Senate – then controlled by Democrats – eliminated the filibuster for circuit court nominees. That allowed circuit court judges to be confirmed with a bare majority of Senators. When Trump nominated Neil Gorsuch to the Supreme Court in 2017, the Republican-controlled Senate eliminated the filibuster for Supreme Court nominees. By the time Justice Ginsburg passed away, conditions were perfect for a breakneck confirmation.

The GOP saw the opportunity and seized it. And Republicans feel confident that Democrats will not respond in kind. As Sen. McConnell stated, "They won’t be able to do much about this for a long time to come."