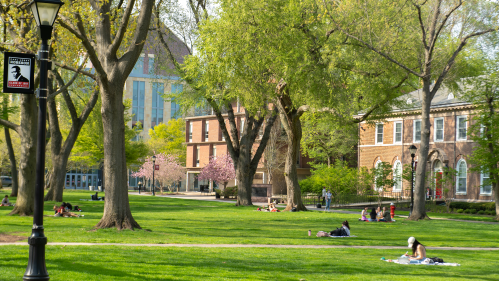 Rutgers President Jonathan Holloway and Princeton University President Christopher Eisgruber led efforts bringing together university and community college leaders throughout New Jersey to urge members of Congress to double the maximum Pell Grant award to $13,000 – up from the current maximum award of $6,495 – as they consider the federal budget.

It would be the largest investment in students through federal student aid in decades.

“Doubling the maximum Pell Grant will help more students from low-and middle-income families to get to and through college,” the presidents wrote in a letter to members of the New Jersey congressional delegation. “Pell is a proven program, and in combination with other federal aid, state aid, and institutional grants, has provided millions of low-income students a wide array of postsecondary opportunities at both two-and four-year colleges and universities.”

After Pell Grants were created, they covered nearly 80 percent of attending a public four-year college, the letter notes. Pell now accounts for less than 30 percent of the cost of attendance.

“It is time for a dramatic recalibration of this vital program to restore the promise of Pell to make college possible for the next generation of postsecondary students,” the 44 university and community college presidents wrote.

In New Jersey, more than 150,000 students receive Pell Grants each year. At Rutgers, nearly 18,000 of those students rely on Pell Grants, providing $91 million annually toward their education.

“We know there are other potential Pell recipients who believe a college education is beyond their means and thus do not even apply for this benefit,” the presidents wrote. “For those students, the wealth gap will only grow wider.”

“It is exciting and gratifying to see that Congress and the President have been considering ways to help make college more affordable,” the letter notes. “A college degree is a hugely important tool of social mobility that opens a wide range of opportunities for careers that can transform the lives of students and their families, in addition to propelling economic prosperity and job growth.”