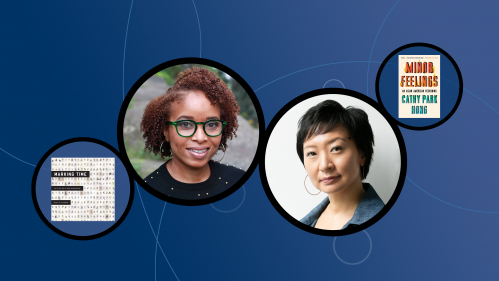 Nicole Fleetwood, a professor of American studies and art history in the School of Arts and Sciences at Rutgers University-New Brunswick and poet Cathy Park Hong, a professor in the MFA in Creative Writing program at Rutgers University-Newark, received National Book Critics Circle awards for their work that tackles contemporary topics of incarceration and Asian identity.

The National Book Critics Circle awards are given each March and honor literature published in the United States in six categories – autobiography, biography, criticism, fiction, nonfiction and poetry. These are the only national literary awards chosen by critics themselves.

Minor Feelings, an account of the author’s experience as an Asian American, weaves together personal experience with broader cultural criticism and has been favorably reviewed and lauded by countless critics since its publication. The Chicago Review of Books called it “an urgent consideration of identity, social structures and artistic practice,” and said, “It’s a necessary intervention in a world burgeoning with creativity but stymied by a lack of language and ability to grapple with nuance.”

Hong said she started writing the book when she was pregnant because she wanted a better world for her daughter. In her acceptance speech, Hong was visibly moved and dedicated her award to the eight people murdered in Atlanta, GA, recently.

“This is for their families, and this is for all of the Asian women, the women in the sex industry, in the service industry, the migrant workers, the factory workers, the mothers and daughters who have come from homelands riven by empire, who have labored and struggled and died in the shadows of American history," she said. "Your hardship and spirit will not be in vain. We will remember you. We will fight for you. Your lives are not expendable. You will be remembered.”

In announcing the award, Marion Winik, the autobiography committee chair, said, “This courageous, unblinking, innovative, gorgeous and furious book invites readers to begin to understand the experiences of the completely non-homogenous group of people lumped together as Asian Americans, as well as the singular experience of the author, who is Korean American, the daughter of immigrants, and for whom English is a second language.”

Rigoberto González, who is director of the MFA program at Rutgers-Newark, spoke to the timeliness of Hong’s book.

“Cathy's love and affection for her family and communities are necessarily amplified, especially during this troubled period that has placed such an unjust burden on Asian American lives,’’ González said. “Our MFA program is so fortunate and so proud to have such an important voice and critical thinker guiding our students (and really, all of us) toward the difficult truths that lead to social change.”

Fleetwood’s book, Marking Time, was a title nine years in the making and is based on scores of interviews with incarcerated people and their families, prison staff, activists and other observers. It explores the importance of people in prison creating art as a means to survive incarceration.

“I am deeply honored,’’ Fleetwood said, who did not expect to win the award and was jotting down notes during the ceremony in case she needed to make an acceptance speech.

“It means a lot to be recognized by the NBCC, especially in the category of criticism. Some of my favorite authors have received this award, like Zadie Smith and Maggie Nelson,’’ Fleetwood said. “Most importantly, it means so much to have the artists featured in the book recognized for their incredible contributions to contemporary art and social justice.”

In announcing the award, Justin Rosier, chair of the criticism committee, called Marking Time, “a blistering critique of the penal system and ultimately a testament to human flourishing in spite of it.’’

During her acceptance speech given during the virtual ceremony on March 25, Fleetwood talked about her cousins who had been incarcerated and had shared their stories and experiences with her. Watching family step in to support them while they were in prison inspired her to pursue the project, she said.

Growing up in a mill town in southwest Ohio in the 1980s, Fleetwood witnessed escalating encounters between law enforcement and family members, neighbors and friends living in her African American community at a time when manufacturing dried up and union-paying jobs were vanishing.

In Marking Time, she writes, “There has never been a time in my life when prison didn’t hover as a real and present threat over us.”

Fleetwood also curated an exhibit on display at MOMA PS1 by the same name as her book that explores the work of artists within the U.S. prison system and the centrality of incarceration to contemporary art and culture.

Susan Sidlauskas, professor of history and theory of modern art and chair of the art history department at Rutgers-New Brunswick recently visited the exhibit, which closes April 5, and spoke to the power of Fleetwood’s work.

“Having seen the show just a week ago, I can attest to the luminous intelligence that shaped every single decision she made, from the exceptionally informative text panels, to the carefully considered layout of the works, which are themselves extremely rich, and incredibly diverse,” says Sidlauskas, who was moved by both the exhibit and Fleetwood’s book. “Rarely have I been touched in this way by a story that is as heartbreaking as it is beautiful.”