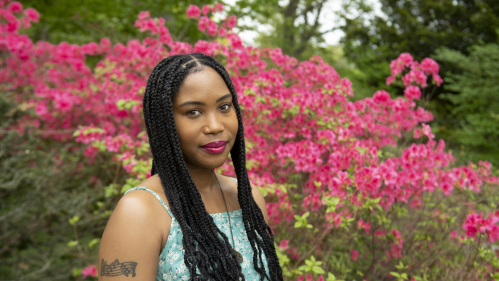 Shaniyah Bernabela (MGSA ’21) is a National Guard reservist who will earn her BFA in filmmaking from Mason Gross School of the Arts on May 16, 2021.
Nick Romanenko/Rutgers University
Download High-Res

Shaniyah Bernabela has been leading a double life for the last five years.

During her weekends as a National Guard reservist, she identifies suspected chemical, biological, radiological and nuclear weapons for the Department of Homeland Security.

During her semesters as a film student at Mason Gross School of the Arts, she identifies what constitutes a good script, which camera angle evokes the right emotion and how to convey mood with proper lighting.

Through it all – from a monthlong military training to filming her senior project during COVID-19 – Bernabela, 26, who receives her BFA on May 16, made balancing civilian and military life look effortless.

So did the flexibility given to her from both Mason Gross faculty and her National Guard superiors. She completed a full-time reserve commitment in February, then doubled up on her schoolwork when she returned to her senior thesis project in March. She was able to reschedule her summer duty last year to squeeze in an internship with The Daily Show with Trevor Noah.

A classically trained violinist who declined an invite to Juilliard to pursue theater, Bernabela joined the National Guard to fund her education. She spent the first two years as a full-time reservist stationed in Missouri, where she graduated from boot camp and trained to become a chemical, biological, radiological, and nuclear specialist.

“I really enjoyed it; the discipline and seeing things that you wouldn’t see as a civilian,” she said of her military experience. “In AIT (Advanced Individual Training), things like when we had to go through a gas chamber, it wasn’t fun in the moment – some people passed out, some threw up – but I look back and get to say, ‘Wow, I did that.’”

Bernabela thrived in the National Guard, but she never lost sight of her dream to graduate from art school. The movie-lover said she always envisioned herself as a performer while a student at Woodbridge High School but didn’t have the confidence to pursue acting because of a speech impediment she struggled with in her youth.

“But after seeing The Lion King on Broadway, I knew I wanted to give it a shot,” she said. “I told myself that if I get accepted into the American Academy of Dramatic Arts that's a sign that I should pursue it.”

She hired an acting coach and prepped for a year before applying to the academy, where she was accepted. She spent two years in the theater arts program in New York City while serving one weekend a month and two weeks each summer as a reservist. She then transferred to New York Film Academy, where she studied acting and film for a year and had a formative experience in a directing course.

“Everyone wrote a script in a directing course. The person with the best script got to direct and choose a full crew,” said Bernabela, who earned the distinction of writing the best script. “I still want to act, but after that experience I realized I also really like to write stories.”

“I see a lot of films about African Americans based on trauma or slavery or police brutality. I think it’s important to tell these stories so people who don’t experience that every day can see what it’s like,” said Bernabela, who enrolled in Rutgers to refine her work behind the camera and build on her skills as a writer and actor. “But we should also see rom-coms with an all-Black cast or just light-hearted shows. When it comes to big picture films, I want to see more stuff like Black Panther and superheroes you don’t usually see.”

Since her arrival at Mason Gross's Rutgers Filmmaking Center in 2018, that’s what she has focused on. Her senior film, Drifted, which she produced, directed and played lead in, points a lens at a rite of passage people of all races and ethnicities experience: losing touch with a childhood friend.

The discipline and no-nonsense organizational style she adopted from her military training came in handy while filming during the pandemic. After getting her cast and crew tested for the virus, they spent two days holed up in an Airbnb to keep everyone safe. The remaining shoots were in an open park and a train station, where everyone wore masks and social distanced when not on camera.

“The military taught me you always need a plan B and sometimes a plan C,” she said. “That helped me in this situation.”

Danielle Lessovitz, who has guided Bernabela all four years at Mason Gross as her directing instructor, called her student a visionary and artist with a sunny disposition and ability to take everything in stride.

“On the one hand, she is a very organized and forward thinker. On the other hand, she is very emotional and sensitive,” said Lessovitz. “She can elicit a really incredible performance as an actress, but she can also get behind the camera and direct other people and direct the practical needs of production.”

“Being an art student and a National Guard soldier simultaneously taught me that the only limitations in life are the ones you create yourself,” she said. “If you really want something, you either make it happen regardless of any hurdles you might face or you make excuses.”