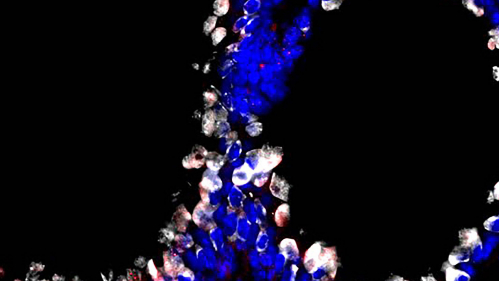 Mechanism has potential implications for aerosol vaccination and other applications

A method that could lead to a safe and effective aerosol vaccine to prevent COVID-19 and to treat other respiratory infections has been identified by investigators at Rutgers Cancer Institute of New Jersey and Rutgers New Jersey Medical School.

“Targeted pulmonary delivery is needle-free and minimally invasive, an attribute particularly relevant in the administration of multi-dose vaccines or other molecules. Also, because the lungs are constantly being exposed to pathogens from the air, they have a high level of immune defense activity, and therefore may represent an efficient site for complete immune protection against airborne pathogens,” said co-corresponding author Wadih Arap, director of Rutgers Cancer Institute of New Jersey at University Hospital and chief of the Division of Hematology/Oncology at Rutgers New Jersey Medical School.

In a study, in the December issue of Med and online now, researchers found that targeted delivery to the lungs may have advantages over other vaccines and therapeutic treatments because they arrive directly at the site of the infection.

The approach uses phage particles, a type of benign virus that kills and targets bacteria.

“Our targeted method of pulmonary delivery is the initial step towards the development of aerosol phage-based vaccines for human applications against multiple diseases,” said co-corresponding author Renata Pasqualini, a resident member of Rutgers Cancer Institute and chief of the Division of Cancer Biology, Department of Radiation Oncology at Rutgers New Jersey Medical School.

“Other advantages of phage particles are that they are highly stable under harsh environmental conditions, and their large-scale production is extremely cost-effective compared with other vaccine strategies because they don’t need to be kept frozen in a strict cold-chain, which is a particularly important requirement for the developing world,” Pasqualini said.

In the study, Rutgers investigators identified a small protein that could be incorporated on benign phage particles of a virus so they could interact with the cell linings of the lung and activate antibodies that would boost the immune system and fight off the infection.

These phage protein particles – which can be genetically engineered to develop different types of vaccines against infectious pathogens, as well as other types of medicines – have already been safely used in clinics for almost a century to treat patients with bacterial infections, so they are safe and approved for use in humans.

Phage-based vaccines trigger a sustained and protective immune response, without any detectable toxic effects in the experimental models tested.

“The value of this approach comes from the exquisite specificity of the interaction between the targeted phage particles and the lung cells. This enables more effective delivery of therapeutics or vaccines while reducing the chance of toxic side effects,” notes co-first author Daniela I. Staquicini, a researcher at Rutgers Cancer Institute of New Jersey at University Hospital and Rutgers New Jersey Medical School. “We hope that this work will play a crucial role in the development of vaccines and treatments to block the spread of pulmonary diseases, possibly already for the current coronavirus global pandemic, especially for underserved populations.”