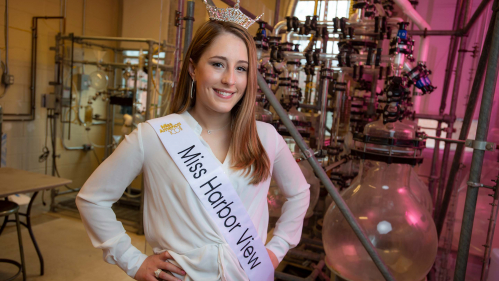 Grace Herdelin is preparing to compete in the Miss New Jersey scholarship competition while finishing a degree in chemical engineering.
Nick Romanenko

Grace Herdelin is preparing to compete in the Miss New Jersey scholarship competition, finishing a degree in chemical engineering, tinkering with a new toothpaste, and recently converted to Judaism.

On the surface, her interests might not seem to have much in common.

But the Haddonfield resident, who will receive a bachelor of science degree in chemical engineering from Rutgers School of Engineering this May, and a master’s degree in the same field in May 2023, sees these endeavors as pieces of an intricate life puzzle, joined by their ability to challenge her to be her finest self.

“These are all things that can help me better myself,” says Herdelin, who describes herself as a person “with a passion for problem-solving who hopes ultimately to pursue a career that will allow me to find and create unique solutions to challenges new technologies bring to the pharmaceutical industry.”

When Herdelin starts her post-graduation job this summer as part of the Early Talent Rotational Program at the international pharmaceutical giant Merck & Co., she’ll bring a resume already brimming with achievements.

These will include her upcoming appearance in the Miss New Jersey Pageant in late June, inspired by her grandmother, Barbara Casarow, who died in December. Casarow volunteered with the pageant and maintained a life-long love affair with the Miss America ceremony.

Still, Herdelin’s passion is the research and development that is ahead.

This semester, as an R&D intern at Colgate-Palmolive in Piscataway, she’s been assigned to the company’s oral care division, designing and implementing new formulas for the company’s products – including toothpaste.

“I’ve worked on some of Colgate’s main products, particularly trying to create ways to produce them more sustainably,” the 23-year-old says. She can’t reveal more because she’s pledged to adhere to company intellectual-property protocols, she adds, but she can share that she’s used these products for years.

Her resume also includes a 2020 award for best poster in the 15th annual Aresty Undergraduate Research Symposium, a universitywide celebration of students’ scholarship and creativity. Her winning poster was called “Crystal Convergence of the Twister Ribozyme.”

Herdelin also was designated an Alumni Industry Scholar, an honor given to high-achieving School of Engineering students.

After graduating from Haddonfield High School in 2017, Herdelin entered Rutgers School of Arts and Sciences in New Brunswick as a chemistry major, then decided in her second year to transfer to the School of Engineering .

“I liked that chemical engineering is an interdisciplinary field, that you can do a lot with that degree. I applied with a leap of faith, and it has proven to be the best decision I could have made,” she says, crediting the support she got from sorority sisters in Phi Mu for encouraging her to make the switch.

Her sorority sisters also encouraged Herdelin to enter a Miss America local preliminary competition earlier this year, her first competition but thanks to her grandmother not her first exposure to the world of beauty queens.

Vying for the title of Miss Harbor View, she chose to perform the soprano aria “O Mio Babbino Caro,” from Puccini’s Gianni Schicchi, for the talent portion of the competition.

Herdelin describes the short aria as lyrically simple but emotionally complex – another challenge. In the opera, the words are sung by a woman bemoaning the rift between her father and the young man she loves passionately.

“The tension of the character of Lauretta really comes through, even in the 90 seconds I get to sing it on stage. I find I can tap a lot of emotion into it,” says Herdelin, who has been performing since the age of 5.

She knows she’ll have to flex her time-management muscles to meet the new demands of the statewide competition, further honing her operatic skills and preparing for the social-impact project competition hopefuls are required to present.

As part of her project, “Combatting Food Insecurities Through Community Engagement,” Herdelin volunteers with Elijah’s Promise in New Brunswick, which serves more than 350,000 free meals a year.

As a religious-school teacher at a local synagogue, she also coordinated a mitzvah project that raised more than $500 for the soup kitchen, and she hopes to work with other area organizations to advocate for summer meals for needy children.

Born and raised Catholic, Herdelin took another leap of faith during her sophomore year at Rutgers, when she began attending Shabbat dinners with Jewish friends.

The melodies sung at the dinner table and the customs she was observing exerted a strong pull. But not until she studied abroad in China during the summer of 2019, reading everything she could put her hands on about Judaism, did Herdelin begin a deeper dive into the religion that so intrigued her.

Back on the New Brunswick campus, she studied with Rabbi Victor Appell, former senior educator at Hillel at Rutgers, undergoing a formal conversion in September 2020.

Once again rising to the challenge, Herdelin not only immersed herself in Jewish courses, but also snagged the 2021 Award for Excellence in Jewish Studies, presented by Rutgers’ Department of Jewish Studies. She not only remains active in Jewish life on campus, but she served on the Hillel Student Organization’s board in the role of social and holiday co-chair too.

“I see her as someone who is respected, passionate and intelligent, someone other students look up to,” the rabbi says.