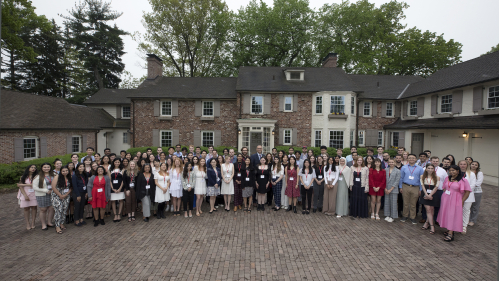 2022 Matthew Leydt inductees gather with President Jonathan Holloway, center, in front of his Piscataway home during a pre-commencement celebration on Friday, May 13, 2022.
Melvin Evans
Download High-Res

The group of distinguished grads includes those headed to law school, med school and a year as Fulbright scholars

Serena Luckhoff fell in love with quantum mechanics as a 10-year-old watching NOVA documentaries alongside her computer scientist father.

Still smitten with the subject as a high school student, Luckhoff heeded her dad’s advice when she told him her dream of conducting research and earning a doctoral degree in the field.

In the end, the Rutgers-New Brunswick graduate did even better.

Before donning her cap and gown, Luckhoff was inducted into the university’s prestigious Matthew Leydt Society on Friday along with 207 of her peers who ranked in the top 2 percent of Rutgers-New Brunswick and Rutgers Biomedical and Health Sciences’ graduating Class of 2022.

“Now I can tell my dad, I’m in the top 2 percent, not the top five,” said Luckhoff, who earned her dual degree in cognitive science and German from the School of Arts and Sciences and will be spending a year abroad as a Fulbright scholar.

Luckhoff and her fellow inductees were welcomed into the society during a dinner on the grounds of the home of Rutgers President Jonathan Holloway and his wife, Aisling Colón, who chatted with the students and their guests and posed for photos. During his remarks to celebrate the occasion, Holloway congratulated the group on their collective academic achievement.

“Getting through college in the top 2 percent of your class is hard in the best of times. These are not the best of times,” said Holloway, referring to the challenges the pandemic presented during their time at Rutgers. “You have gone through something no one else in all of my experience in higher education has had to go through. What you just did, and the fact that you did it in such a fashion, is nothing short of remarkable.”

This year’s group shares the spotlight with members of the graduating classes of 2020 and 2021, who missed in-person commencements during the pandemic. They will be honored together at a second ceremony hosted by the Holloways later this month.

Returning graduates include Luke Hinrichs (SAS ’21), 23, who was given a chance to pursue his academic dreams when he came to Rutgers – while escaping the housing and financial insecurity his family struggled with for years.

“I would come to campus every semester excited to learn, but it was also really the only time I had my own room or bed. Otherwise, I was on a couch or bouncing from place to place with what I could carry,” said Hinrichs, a Pell Grant recipient and Honors College student who earned degrees in economics and political science and a minor in philosophy. “Rutgers provided me with stability as well as community.”

After graduating, the Cherry Hill native took a gap year to work as a legal fellow at the Fair Share Housing Center in Mount Laurel before he enrolls in Harvard Law School this fall. There, he plans to study ways to fix flaws in the legal system that allow families like his to fall through the cracks during bouts of unemployment or medical crises.

Hinrichs’s mother, who was studying for her master’s degree in library science while her son was studying for his undergraduate degree, will be by his side when he receives his Matthew Leydt Society pin on May 25.

“She will be the star of the show,” said Hinrichs. “My greatest joy has been seeing her smile at my successes.”

Named for the first and only 1774 graduate of Queen’s College, New Brunswick, the Matthew Leydt Society, was launched in 2015. Leydt matriculated as a sophomore when instruction began at Queen's College in 1771, earning a bachelor of arts degree three years later.

At that first commencement in New Brunswick, Leydt delivered orations in Latin, Dutch and English and, after graduation, earned his license to enter the ministry of the Dutch Reformed Church. At Queen’s College, he studied under Frederick Frelinghuysen, the college’s first tutor, and Rev. Jacob Rutsen Hardenbergh, who would later become the college’s first president in 1786. In 1825 Queen’s College was renamed Rutgers College in honor of Col. Henry Rutgers, a trustee and Revolutionary War veteran.

Under the string-lighted tent at Friday’s ceremony, Joshua Yu, 22, of Lincroft and Lauren Kim, 22, of Tenafly shared a table with family not far from a floral-adorned buffet. The couple smiled and waved to classmates passing by while a string quartet played in the corner.

“A lot of the people here I know from my classes,” said Yu, who is graduating with a degree in biology and is one year into his medical degree at Robert Wood Johnson Medical School. “So, although Rutgers is big, this goes to show it is smaller than you think. This community helped each other out to get to this point.”

His girlfriend Kim laughed when recounting how Yu shared the news with her that he was being inducted into the Matthew Leydt Society.

The English major who is one year away from earning her master’s degree in graduate education said this gathering was one of the graduation events she was most looking forward to this weekend.

“Commencement is so huge. I thought I wouldn’t be recognized at graduation,” she said. “It is nice to be honored like this in a special way and share it with my family and friends.”

Similarly, Cara Bieber, who graduated from Rutgers in 2020 with a bachelor’s degree from Rutgers School of Management and Labor Relations, said she considers it an honor to be a 2020 Matthew Leydt inductee. After missing an in-person commencement and convocation, she is especially excited for to the chance to reconnect with her peers at the May 25 induction ceremony.

“So much was lost during COVID, it's meaningful that the university is including the 2020 class in the events and celebrations we weren't able to have,” said Bieber, who is now pursuing her juris doctorate at Seton Hall University School of Law. “It's a testament to Rutgers’ care for its students, both current and former.”