In 1938, after having spent months raising funds for the Republican forces fighting the fascist Nationalists in the Spanish Civil War, Paul Robeson went a step further. He embarked on a weeklong tour of Spain, where he met with and sang for Republican troops not far from the front lines. Although he saw devastation, he was also inspired. It was “a major turning point in my life,” Robeson later wrote in his 1958 memoir, Here I Stand. “There, I saw that it was the working men and women of Spain who were heroically giving ‘their last full measure of devotion’ to the cause of democracy.”

Also fighting for the cause were African Americans, who on the battlefield were considered equal to their white counterparts – a far cry from their status in the United States.

“He was intimately connected with the struggle for desegregation and civil rights in the United States, but he linked that to struggles in various parts of the world,” Edward Ramsamy, associate professor and chair of the Department of Africana Studies at Rutgers University–New Brunswick, says of Robeson. “He supported Welsh mine workers, fought for labor-union rights in England and struggled against fascism. Paul Robeson was a genuine global citizen.” 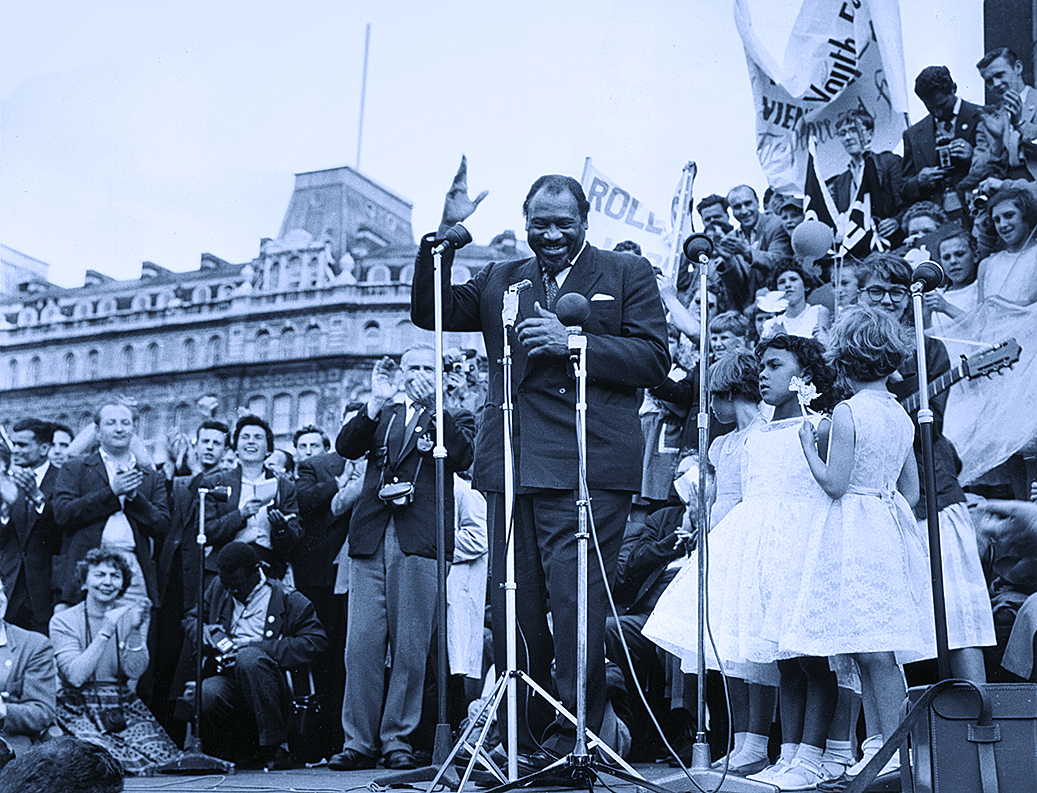 Paul Robeson waving to the crowd at a rally against nuclear armament organized by the British Peace Committee, Trafalgar Square, London in 1959.  (Photo by Express/Express/Getty Images)

The seeds of his international activism were sown in 1925, after Paul and his wife, Eslanda, moved to London to further establish his nascent singing and acting career. Not only were they welcomed by the rich, powerful and intellectually progressive, they also made friends with future Asian and African leaders who were studying in London and, post-World War I, strenuously advocating for their nations’ independence.

“The early 20th century marked the moment when pan-Africanism and the anti-imperial struggle come to the fore,” explains John Keene, professor and chair of the Department of African-American and African Studies at Rutgers University–Newark. “The back of imperialism is being broken, and the colonial struggle gains force everywhere. That was a key moment for Robeson.”

Also key was his discovery of the folk music of many nations and its affinity with the Negro spirituals he performed in concert. “He’d come to regard himself as a folk singer, devoted to what he called ‘the eternal music of common humanity,’ ” journalist Jeff Sparrow writes in his book No Way But This: In Search of Paul Robeson.

A chance encounter arguably set Robeson on this path. In 1929, after performing in the musical Show Boat, he was returning to his London home when he heard a group of men singing. It turns out that they were Welsh miners who had walked roughly 170 miles to protest unlivable wages and working conditions. Robeson joined their protest and, over the next few decades, raised money for and promoted their causes.

Oppressed people everywhere constituted an “international brotherhood,” he wrote in Here I Stand. And the enemy was fascism, as personified by Hitler, Mussolini and Franco. After his tour of Spain, Robeson divided the world into two camps: fascists and anti-fascists, among the latter the Soviet Union, which during a visit in 1934 he found to be devoid of racism. But after World War II ended, and Stalin’s atrocities were being made public, his sympathies for the U.S.S.R., and communism in general, came under increased suspicion. Robeson had been monitored by the FBI as early as 1941, but in 1950 his passport was revoked. It wouldn’t be reinstated for eight years.

Peace groups and prominent figures worldwide protested the U.S. government’s treatment of Robeson, who continued to promote international causes remotely, most notably through a statement sent to the 1955 Bandung Conference in Indonesia, where representatives from Asian and African nations gathered, most of them newly independent. In concert with the conference’s call for nuclear disarmament, Robeson pushed for a peaceful settling of conflicts and endorsed the conference’s ten principles, among them: “Recognition of all races and the equality of all nations large and small.”

More than a decade later, after his career had ended and he was living as a recluse in his sister’s Philadelphia home, Robeson was still hailed as a hero abroad. For his 70th birthday, several nations hosted celebrations, including England, where celebrities gathered at the Royal Festival Hall in London to pay him tribute. Oliver Tambo, a South African anti-apartheid politician, sent a message to the event in which he called Robeson “a universal idol and a friend dear to all who know him or have only heard his priceless voice.”