As a conceptual artist, Park McArthur lives where the philosophical meets the visual. She turns fleeting thoughts into tangible objects, imbues ephemeral notions with sturdy existence. She brings ideas to life.

As the newly named recipient of the Tepper Family Endowed Chair in Visual Arts, she’ll be doing much the same with students at Mason Gross School of the Arts over the course of her two-year term. Established in 2011, this endowed chair position is the first of its kind at Mason Gross. While the approaches of each Tepper Chair have been very different, they consistently serve as an inspiration to students as models of artists working at the highest level. 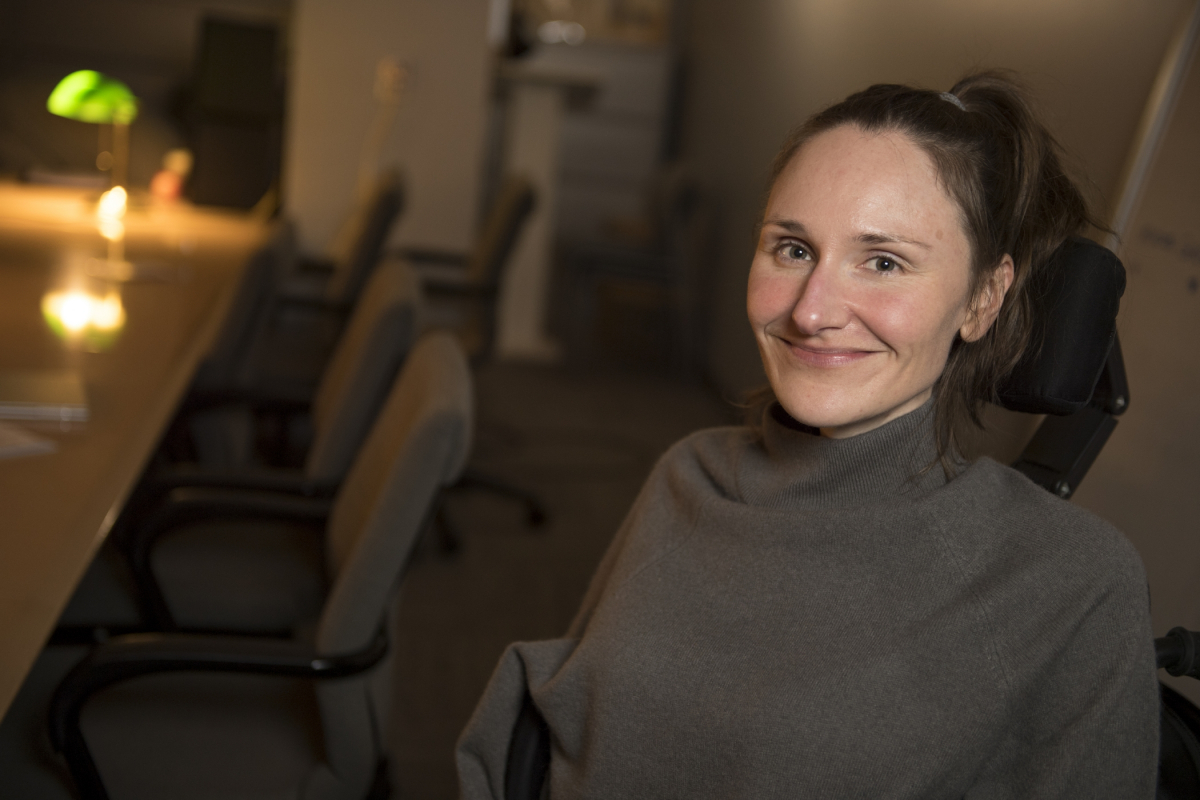 McArthur is using her experience to help students transform their dreams into reality, while understanding the real-world pressures of being an artist. Some of that knowledge is imparted privately; some comes in the graduate seminar she’s teaching.

“She teaches us not just about making art, but about making it through the world,” says Gabriel Sacco, who’s working on his MFA. “She teaches you about things that don’t usually get talked about, like contracts and riders, and then finds a way to incorporate that into the class, having us work with documents and emails. It’s invigorating having someone there who’s gone through all this – it shows it can be done.”

McArthur brings in guest speakers to her Monday afternoon seminar who work in the cultural field of art: writers and editors, curators, security staff, conservators and registrars.

"Unless artists are also working these jobs, it can be difficult to understand how other professionals interface with our goals and concerns in the studio,’’ McArthur says. “Part of our class time will take place at the Zimmerli Art Museum, where staff will speak to us about the work done between departments in the course of planning upcoming exhibitions."

Her thoughtful approach to teaching resonates with students.

“When I was applying to grad schools, I didn’t know Park personally, but I knew her work and found an old email address and wrote and got a really thoughtful reply with lots of suggestions," says Chloe Crawford, currently finishing her MFA thesis. “After that, I think I would have applied to whatever school Park was teaching at. It felt very special to me, personally, when Park got the Tepper Chair.”

Like Crawford, McArthur uses a wheelchair, and has for years. “I don’t know how this informs the art I make,” McArthur says. “I think it may influence how quickly I change my mind.”

Some of her pieces deal with definitions of access or concepts like dependency; others force us to confront preconceptions by stripping objects of context.

Ramps, shown at the gallery Essex Street in 2014, displayed various inclines – some sleek, some roughly made – used by people in wheelchairs.  The idea gestated over four years, as McArthur, seeking to attend various events in New York City, often found them inaccessible.

“It didn’t start out as an art project but as an attempt to participate in art, as an artist, in a very inaccessible city,” she explains.

Her 2017 show at the San Francisco Museum of Modern Art called Softly, Effectively, curated highway signs – but all were turned to the wall, so their essential purpose was obscured.  When the size of the room proved a problem, McArthur quickly improvised by pulling some pieces, stacking others.

“Maybe working this way has something to do with my using a wheelchair,” she says. “Finding ways through, on the fly.”

McArthur has made art since she was a child, taking “as many art classes as I could” in high school and eventually getting her MFA at the University of Miami. She’s taught at the New School in the Visual Studies Department, and last year was part of Rutgers’ Visiting Artist Program. 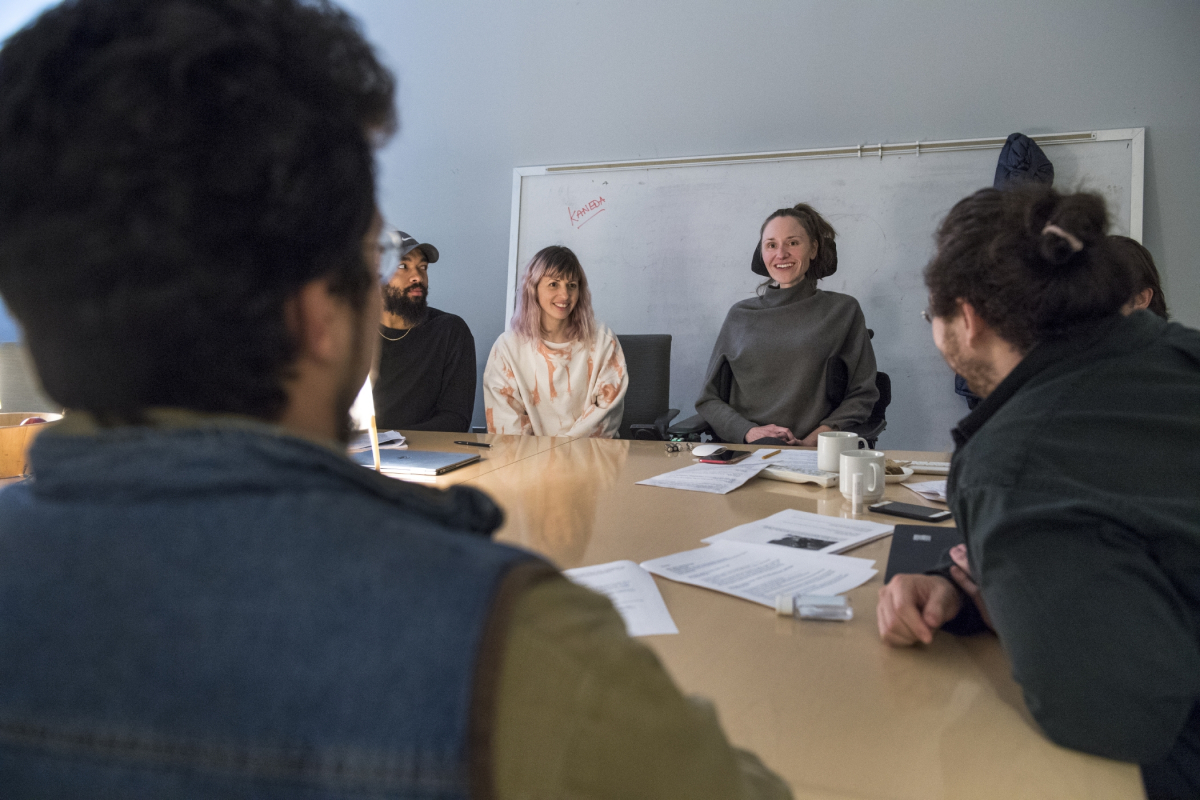 At Mason Gross, McArthur continues to work on her own art – “I want to spend some time in the paper-making studio,” she says – while preparing students for the hard choices the art world sometimes demands.

“Students are already facing these decisions,” she says.  “How to deal with being evaluated by school, work and social life? Artists face difficulties finding place and time to work and dream, fighting feelings of scarcity and competition.”

Encouraging the students’ work is another part of the job, and one that requires her to meet artists on their own playing fields. McArthur says her focus is always on “trying to feel what’s important to an artist.”

“This might be a material they are excited about, or a particular problem they have or something or someone they want to celebrate or antagonize,” she says.

“Sometimes you need someone to come in and see if the medium really fits the idea,” he says. “Maybe it’s better as a video? Or a painting? It’s really good to be able to talk with her on that level.”

“She’s so generous with her time,” says Crawford. “It’s been really great to have someone with this very broad knowledge base.”

McArthur, who describes her interactions with students as “joyful,” is modest about assuming too much credit for their successes.

“I’m not much of an advice giver, because it’s so hard to know what can be helpful,” she says. “But what I have learned over time is that there are lots of ways to participate in something – especially at points when it feels like there aren’t.” 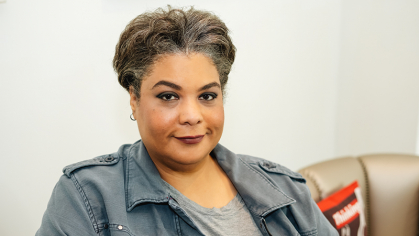