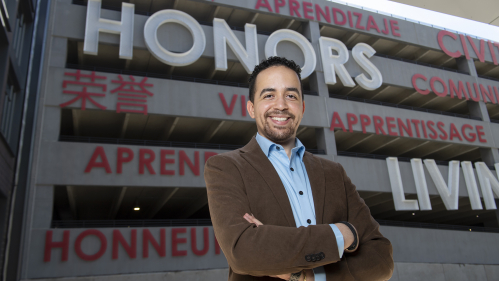 Bryant Gomez, who is the first member of his family to earn a college degree, starts a doctoral program in psychology at the City University of New York this fall.
Nick Romanenko/Rutgers University

Bryant Gomez had barely settled into his first year as a transfer student at Rutgers University-Newark when the campus shut down due to the COVID-19 pandemic. But unlike the millions of other college students who had to quarantine with their parents, Gomez, a psychology major, wanted to study how the lockdown was affecting their happiness.

He reached out to a professor and together they launched an experiment to determine what types of positive psychology interventions people thought would help them cope as they faced endless months of isolation.

The study, which became the basis of his honors thesis, found that certain activities known to enhance our well-being, such as keeping a gratitude journal or performing small acts of kindness, were less appealing to women after they were reminded of the negative impacts of COVID-19 compared to a control group. Similar effects, however, were not found among men.

While its conclusions are preliminary, the study is a first step in exploring how people view different strategies for pursuing happiness in difficult times, says Assistant Psychology Professor Samantha Heintzelman, Gomez’s thesis advisor who collaborated on the project.

“Bryant did a really, really excellent job with this project,” Heintzelman says. “I think it lays the groundwork for him to build a strong research program moving forward.”

When Gomez enters a doctoral program in psychology at the City University of New York this fall as the first member of his family to earn a college degree, keeping focused on future research will be his priority.

He was inspired to attend college by his parents, who immigrated to New York from the Dominican Republic. His father, a technician for the New Jersey Turnpike, arrived in the late 1980s, and his mother, a housekeeping supervisor at a hotel, came with their two young sons a few years later.

After three years at Bergen Community College, where he served on the board of trustees, Gomez started at Rutgers-Newark, where he was one of 30 transfer students accepted into the Honors Living-Learning Community (HLLC) his junior year. The program provides a scholarship to pay for room and board, an academic minor focused on social justice, meetings with other honors students and weekly mentoring.

Through the honors program, Gomez became a teaching assistant for the course “Health Disparities: Implications in Urban Communities,” which developed out of his mentoring relationship with Jennifer Bucalo, former director of student engagement and leadership development at HLLC.

“He was a model TA,” says Bucalo, who teaches the course. “He was extremely organized, very helpful and every deadline was met on time. If I assigned a task, not only did he complete it, he went above and beyond. That’s what I think of when I think of Bryant.”

Gomez, who lives in Englewood, became interested in psychology at Bergen Community College where, as president of the Phi Theta Kappa Honors Society, he and a group of students conducted an experiment on the use of music therapy and sound sensations to reduce anxiety in college students. The project helped the chapter receive the award for the most distinguished Phi Theta Kappa chapter in the world in 2019.

At Rutgers, Gomez says his view of psychology was transformed when he took a course on community psychology with Ramona Ross, assistant undergraduate director of psychology. In the class, Gomez learned that psychology has many subfields and that the discipline can address a range of social issues such as homelessness.

“That course showed me what psychology could be and how we can take these theories and applications and implement them in a real-world setting,” says Gomez, who plans to study applied social psychology in graduate school.

Last fall, Gomez became a lead teaching assistant with Braven, a national nonprofit that empowers promising underrepresented college students on their path to meaningful careers and lives of impact. In his position, Gomez managed five other teaching assistants who were supporting more than 200 students taking courses in the program this year.

In his own pursuit of a doctoral degree, Gomez received guidance through the Ronald E. McNair Scholars Program at Rutgers, which offers an annual stipend and mentoring to students who are first-generation, low-income or racial and ethnic minorities and want to attend graduate school.

Gomez says he wouldn’t have been able to reach his goal without the support he received at Rutgers. “I don’t think I would be where I am without these programs,” he said. “I’m very thankful for Rutgers and all the opportunities it’s given to me.”