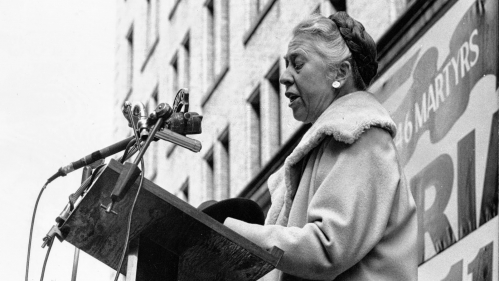 Esther Peterson, who served as the highest-ranking woman in John F. Kennedy’s White House, is featured in For the Many: American Feminists and the Global Fight for Democratic Equality.
Courtesy of the Kheel Center for Labor-Management Documentation & Archives

Dorothy Sue Cobble previews her book on the global history of U.S. feminism in the 20th century

Esther Peterson isn’t a household name like Susan B. Anthony or Rosa Parks, but she should be.

A one-time teacher and union organizer, Peterson served as the highest-ranking woman in John F. Kennedy’s White House and established the President’s Commission on the Status of Women. She was the driving force behind the Equal Pay Act of 1963 and an eloquent, effective advocate for expanded social security and decent, better-paying jobs for all.

In later years, Peterson became a leading voice for consumers and a staunch proponent of truth in advertising. That sell-by date on your milk and those nutrition facts on your cereal? You can thank her for those.

Peterson is right at home in Dorothy Sue Cobble’s forthcoming book, For the Many: American Feminists and the Global Fight for Democratic Equality, which explores the power of female-led social movements and the ways in which American women transformed politics in the U.S. and globally.

“I tell the story of famous women like Eleanor Roosevelt and Frances Perkins, but also some of the lesser-known working-class women and women of color who were so essential to pushing forward a progressive agenda,” said Cobble, a Distinguished Professor Emerita of history and labor studies and employment relations at Rutgers-New Brunswick. “I'm interested in them because their radical politics and approach to feminism are so relevant to solving today’s problems of stark inequality and diminishing democracy.”

The “full rights feminists” who populate Cobble’s pages wanted more than legal equality with men and the right to vote; they fought for economic rights, broad social reform and the full participation of all citizens in our democracy – often drawing inspiration from abroad.

Perkins, who served as labor secretary under President Franklin D. Roosevelt and chaired his Committee on Economic Security, looked to Sweden, the U.K. and Australia when crafting New Deal policies such as the Social Security Act of 1935. Peterson, the assistant labor secretary under President Kennedy, spent a decade in Europe and brought back ideas about care work and policies to support working mothers.

Cobble also writes about Polish-born Rose Schneiderman, who became a top leader in the U.S. labor movement, and Maida Springer Kemp, who forged important connections with unions in Africa. And there’s Toni Sender, a prominent German socialist and Reichstag legislator who fearlessly voiced opposition to Adolf Hitler. Fleeing for her safety in 1933, she came to the U.S. and became a major figure in the worker justice movement and the United Nations Commissions on Human Rights and Women’s Status.

That’s where Cobble’s book stands out from others in the genre.

“This is the first global history of U.S. feminism in the 20th century,” Cobble said. “There have been many pieces of this story told in important new works, but the larger narrative generally takes place within U.S. borders. There hasn’t been sufficient recognition about how feminists and policymakers outside the U.S. influenced our policy.”

Cobble’s book is also noteworthy for centering social democratic thinking and activism, and for elevating women’s behind-the-scenes work. Women remade the Democratic Party in the 1920s, fueled the growth of unions in the '30s, and played crucial roles in the civil rights movement of the '60s. They just don’t get the credit.

“We usually think of the men,” Cobble said. “But women were on the front lines, and they were influential in determining the direction of the movement.”

Taking the long view on a century of activism, Cobble seeks to understand how women from the grassroots level to the upper echelons of government developed their power. She makes a compelling argument for the U.S. to rejoin the global conversation and recognize the limits of go-it-alone nationalism. And she takes on scholarly critics who fault some of our most progressive women in government for settling for too little.

Peterson, who served under President Kennedy and worked well into her late 80s, passing away in 1997, had a theory about that.

“Peterson often talked about politics as the ‘art of the possible’ and explained partial victories as the first step toward more substantial change,” Cobble said. “She was convinced that change moves incrementally and that the key is never to give up the struggle. I look to women like her for helping us think about how we can be both realistic and visionary at the same time.”

The Rutgers Center for Women and Work (CWW) will host a virtual panel discussion about Cobble’s book on Thursday, May 13, at 2:00 p.m. Cobble, who served as CWW’s founding director from 1992– 1996, will be joined by other prominent historians, sociologists and women’s studies scholars. Click here to register.