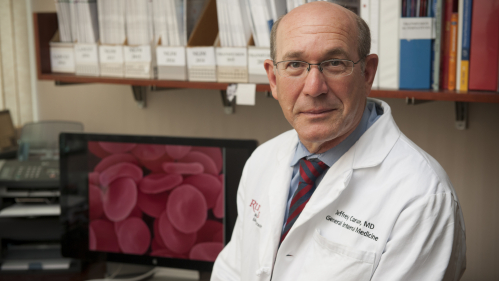 Jeffrey L. Carson, MD, whose research has profoundly reshaped transfusion medicine by establishing evidence-based national standards, saving vital blood and enhancing care for even the most critical of patients, is being honored by the American College of Physicians (ACP) with the John Phillips Memorial Award for Outstanding Work in Clinical Medicine for his career-long journey to improve health outcomes for patients. According to the ACP, award “is bestowed for outstanding lifetime work in clinical medicine that has been innovative and/or had a regional or national impact.”

“The significance of Dr. Carson’s work underscores his status as a champion of evidence-based medicine, showing it is safe to use less blood in transfusions for most patients, and exemplifying his commitment to saving patients’ lives.  This is one of the highest awards in Internal Medicine, and we are honored that his work has been recognized accordingly.” said Brian L. Strom, MD, MPH, chancellor of Rutgers Biomedical and Health Sciences.

“As a clinician, Dr. Carson’s body of work is critical to the decision-making process when I consider ordering a blood transfusion for a patient,” said Ranita Sharma, MD, MACP, associate professor and executive vice chair of the Department of Medicine at Robert Wood Johnson Medical School

and chair, New Jersey ACP Awards and Nominations Committee, who led the nomination of Dr. Carson for the award. “The evidence-driven standards established with Dr. Carson’s research contributions make him most deserving of this national prestigious award.”

Faced with a professional dilemma when a patient declined a blood transfusion based on religious beliefs, Dr. Carson began a mission to examine the efficacy of blood transfusions, and study when it is medically necessary to initiate a transfusion. Focused on transfusions to correct low levels of hemoglobin, Dr. Carson found that a restrictive transfusion threshold—the point at which patients receive a transfusion when their hemoglobin concentration is lower than 7 to 8 grams per deciliter (g/dL), rather than the more liberal threshold of 10 g/dL—is safe for most patients. His work provided the foundation for national guidelines issued in 2012 by the AABB (formally known as the American Association of Blood Banks) that endorse a conservative approach when initiating transfusions for most patients. These guidelines have proven critical to aiding physicians performing surgeries and other procedures in deciding when a transfusion is needed and how much blood to give.

Dr. Carson also led an international team of scientists and physicians in comprehensive research examining more than 60 years of data on red blood cell transfusions and 31 clinical trials that evaluated outcomes for more than 12,500 individuals who received transfusions at the restrictive rather than liberal threshold. The results of the study led the AABB to update its guidelines and recommend that most patients who need blood transfusions—including those who are critically ill—need not be given blood before their hemoglobin drops to a lower level than the practice followed traditionally. Dr. Carson co-chaired the guideline panel, working with colleagues from throughout the United States and Canada on developing recommendations to reflect the high-quality evidence. The guidelines were published online in October 2016 by the Journal of the American Medical Association (JAMA).

Currently, Dr. Carson is the principal investigator of the Myocardial Ischemia and Transfusion (MINT) trial to evaluate the differences in outcomes between a restrictive and a liberal transfusion approach in patients in the U.S., Canada, France, Brazil, New Zealand, and Australia who have had a heart attack and have anemia. Supported with a $16 million award from the NIH’s National Heart, Lung, and Blood Institute, the result of the international trial may once again revolutionize transfusion medicine standards, as this population of patients appears to have an increased risk of mortality with a restrictive approach, based on preliminary evidence from several small studies, including a pilot study that Dr. Carson oversaw.

During the pandemic, Dr. Carson co-led a team from Rutgers that studied SARS-CoV-2 in health care workers during the nation’s initial surge of the virus in the northeast. The largest study of its kind at the time, the Rutgers Corona Cohort was instrumental in establishing the prevalence of infection and risks, including finding that health care workers at greatest risk of infection were support staff and underrepresented minorities. The cohort study led to multiple subsequent studies including two clinical trials to test therapeutic treatments for which Dr. Carson was the site principal investigator, including the COVID-19 vaccine clinical trial sponsored by Johnson & Johnson’s Jansen Pharmaceuticals, Inc. Dr. Carson’s site of the J&J vaccine trial enrolled the second largest number of participants in the world.

Dr. Carson’s award will be celebrated during the ACP’s 2022 Convocation Ceremony, at which time Dr. Carson will also be conferred mastership in the ACP. Mastership is given only to a select number of worthy candidates who are deemed distinguished through a combination of achievements, including the practice of internal medicine, academic contributions to the specialty, and service to the organization. Mastership recognizes service as a teacher and mentor, advocacy for quality in internal medicine, a commitment to social justice, deep interest in people, and the creation of communities of medicine. 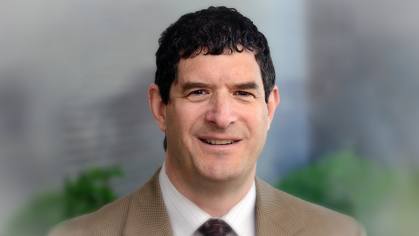 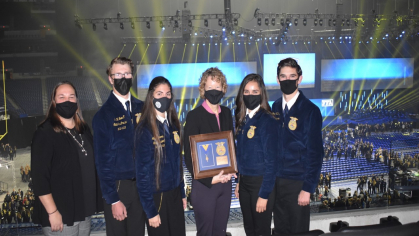 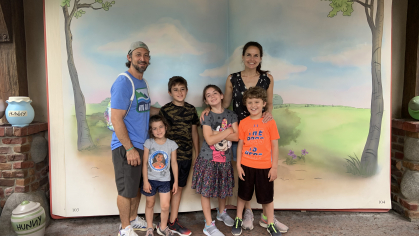 Perceived Parenting Slights Can Make You a Better Parent