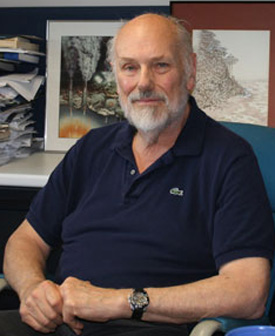 During the late 1970s, scientists discovered a never-seen-before species living on the ocean floor at hydrothermal vents and debunked the popular belief that the bottom of the ocean was relatively devoid of life. This new scientific realization left an unanswered question: how does an environment so far away from the energy source of the sun support such diverse life?

Grassle’s work has proved vital to understanding marine life and has affected decisions about ocean conservation. After developing a theory to explain that the ocean bottom consists of a patchwork of interconnected environments, each with a unique set of organisms. The Rutgers professor emeritus of marine science and founding director of the Rutgers Institute of Marine and Coastal Sciences led a 10-year-effort to create a Census of Marine Life. Working with 2,700 scientists in 80 countries, Grassle led the effort to catalog everything living in the ocean, its abundance and location.

The Census of Marine Life documented more than 1,000 new species -- an invaluable resource to those interested in everything from commercial fisheries to deep-sea mining. An estimated 5,000 more new species sit in jars around the world awaiting description.

For his decades of work improving knowledge of ocean life, Grassle will be awarded the 2013 Japan Prize, which will be accepted on his behalf in ceremonies in Tokyo in April by Paul Snelgrove, a former graduate student and a professor at Memorial University in Newfoundland. The prestigious award bestowed by the Japan Prize Foundation, honors work in scientific fields not usually recognized by the Nobel Prize.

“The census only happened because Fred worked to make something happen,” Snelgrove said. “The end result was a program that captured the interest and excitement of children, adults, and senior citizens, from Japan to China to Europe to America. He was the catalyst for this generation of ocean conscience, just as Jacques Cousteau was for a previous one.”

Grassle received his Ph.D. from Duke University in 1967, and after postdoctoral studies at the University of Queensland in Australia and the Woods Hole Oceanographic Institution in Woods Hole, Mass., where he spent 20 years as a teacher and researcher.

At Woods Hole, Grassle met and mentored a number of promising young scientists, many of whom have gone on to distinguished careers. “Fred was full of ideas, lots and lots of great ideas,” Snelgrove recalled. “He’d throw them out constantly. Fred was very passionate, very excited about ocean life and diversity. And he was very gentle and easy-going. One time, we lost a very expensive piece of equipment over the side. And heshrugged and said, ‘Don’t worry, we’ll find it.’ And we did.”

In 1989, Grassle came to Rutgers to establish the Institute of Marine and Coastal Sciences. At the time, oceanography and related studies were scattered around the university, and it was Grassle’s task to pull them together. “I wanted the institute to be truly interdisciplinary, with real strengths, not just in biology, which is my background, but in chemistry, physics and geology,” Grassle said as he prepared to step down as the institute’s director in 2008.

Grassle also recruited a long list of talented scholars to the institute – among them, Dale Haidvogel, the eminent ocean modeler; Paul Falkowski, now Board of Governors Professor of Geological and Marine Sciences and head of the Rutgers University Energy Institute; Scott Glenn, leader of the Coastal Ocean Observation Laboratory; Sybil Seitzinger, a world expert on nitrogen biogeochemistry; and many others.

In recognizing Grassle, the Japan Prize Foundation praised him for developing the “patch mosaic” theory of deep-ocean diversity. The citation describes Grassle’s work in ocean-bottom diversity as the “starting point for him to lead the establishment of the Census of Marine Life.”

“I’m greatly honored to receive this prestigious award and am pleased to see my work on biodiversity recognized, but also to see recognition for the importance of ocean life,” Grassle said.