A Doctor in the Practice Room 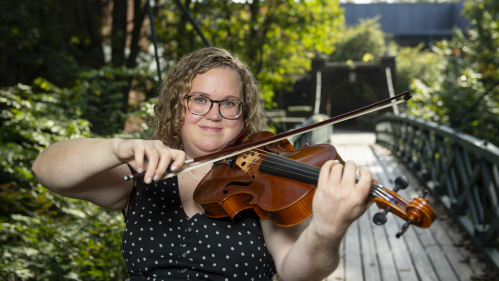 A doctoral student in viola performance, Laura Palm also has a medical degree and plans to use her background to treat repetitive-use injuries in musicians.
Nick Romanenko/Rutgers University

For Laura Palm, music and medicine are natural partners.

Palm plays violin and viola and happens to have a medical degree. Her goal is to become a doctor specializing in treating injuries specific to musicians, who, like athletes, suffer from repetitive stress.

“Repeating the same motion over and over to get it as perfect as you can—that’s essentially what we do in the practice room,” Palm says. “The big difference for musicians is that it’s the smaller muscles—in the fingers or the wrist and tendons. The parts of the body are different, but the way the injury happens—and the way you prevent the injury in the future—is very similar to athletes.”

Unlike athletes, though, musicians can have trouble finding specialists to rehab their particular ailments, Palm says.

“I know of so many people in music schools, and people who have jobs in orchestras later on, who develop medical issues from singing or playing, and it’s so hard to find doctors who understand what it means to spend five hours in the practice room,” says Palm. “It might not be possible to say 'oh, I’ll stop playing for six or eight weeks.'”

That’s the advice Palm was given when she sought treatment for elbow pain and went from doctor to doctor searching for a practical solution. Now, Palm is working toward a doctor of musical arts degree in viola performance at Mason Gross School of the Arts to gain expert knowledge of the physiology of playing, she says, in order to best help her patients.

“The higher the level of my playing, the better I will understand and be able to figure out other people’s problems,” says Palm, who has a bachelor’s and master’s degree in violin performance. “But I also want to pay attention from a medical perspective so that [musicians] don’t develop problems, because I think prevention is better than treating.”

Palm grew up playing violin in Germany, where she earned a medical degree while at the same time studying at a conservatory in Cologne. At the time, she thought she might pursue a research-based medical career, but she says she always knew music would be in her life.

With the few weeks she had off during the summers, Palm traveled to Philadelphia, where she had been staying with friends to practice her English skills and studying violin at Haverford College. After earning her master’s degree at Temple University, Palm decided to pursue a doctoral performance degree at Rutgers, drawn in by professors like Todd Phillips, as well as a significant academic component and affiliated medical school, she says.

“For music students, the number-one thing always is instrumental teachers,” says Palm, who is active with the Rutgers Global Health Institute, where she serves as the co-chair of the student council’s global health education committee. “But also important to me was a strong medical school, because I knew I wanted to do something that combines my two fields.”

Palm has created a series of YouTube videos for the institute about COVID-related topics including masks, mental health, and pets, with plans for more on issues like testing and lung health.

Her contributions have earned her the council’s Student Impact Award, as well as acknowledgment from leaders including Anthony Yung, an MD candidate at Rutgers Robert Wood Johnson Medical School and co-president of the Global Health Institute student council.

“Laura’s leadership and vision have made a positive impact on our student council and the greater university community,” says Yung. “The diversity of student membership in our councils brings unique perspectives and creative solutions, which further advance the topic of global health at Rutgers and beyond.”

For Palm, leading the committee is a way to tend to her medical roots while having an impact in the field.

“As much as I like music, I also started to miss medicine a little bit,” Palm says. “[The institute] has been very welcoming even though, on paper, I’m at school for music. It’s great that they’re specifically trying to get people from all schools to be part of this, because global health, as we’re now seeing, is something that affects everyone.”

Palm knows this personally, having gotten sick with COVID-19 in March. Her immune system was already compromised, because Palm has suffered from recurring brain tumors for several years, requiring intense treatment and significant downtime.

“I had so many plans for the summer,” Palm says with a sigh, including studying for the board exams and making more videos. “A lot of things have not progressed as much as I wanted them to—getting sick kind of derailed my timeline.”

And yet, Palm continues to pursue her two passions at a remarkable pace. She’s working on a book with her physical therapist, who specializes in treating musicians, about exercises for string players to prevent injury. After graduating with her doctorate next year and completing her board exams in the United States, she plans to start a dual residency in physical medicine and rehab.

Despite her health obstacles, Palm says she has learned valuable lessons about herself and her path forward.

“I wouldn’t wish this on my worst enemy,” Palm says of the brain tumors, “but it also helped me grow a lot as a person, and I think I’ll be a much better doctor because of it. Nothing teaches you how to be a good doctor better than being a patient.” 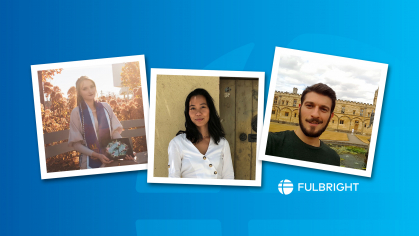 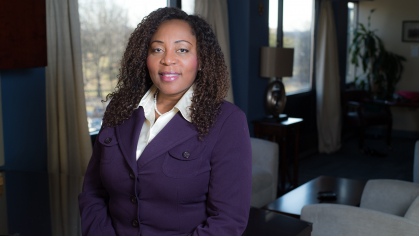