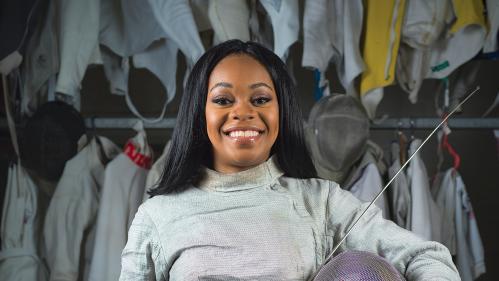 Kamali Thompson will enter her final year at Rutgers Robert Wood Johnson Medical School and continue her pursuit of becoming a member of the four-person U.S. women’s fencing team.
Photography by John Emerson

When she got word that the 2020 Summer Olympics were postponed, Rutgers medical student Kamali Thompson, who had been competing for a spot on the U.S. women’s fencing team, was heartsick. Soon, though, she wondered if she might be sick with COVID-19. As she hastily flew home from Paris, where she had been attending qualifiers and training, Thompson RBS’16 grew alarmed knowing that she and her teammates, with whom she had been reunited just days before, had been competing all over Europe and had come into contact with hundreds of competitors. Thankfully, Thompson is symptom free.

With the postponement of the Games until summer 2021, she will enter her fourth and final year at Rutgers Robert Wood Johnson Medical School in July and continue her pursuit to become a member of the four-person fencing team. She has reason to be encouraged. Following the announcement of the Games’ rescheduling, the International Olympic Committee and USA Fencing decided to freeze all Olympic standings and carry them over to next season. Thompson is in fourth place.

“With only 25 percent of the season remaining, I had definitely intended to finish the season strong and make the Olympic team,” says Thompson, a native of Teaneck, New Jersey, and a four-time NCAA championship qualifier. She had purposely taken a year off from medical school to avoid the chaos of fourth-year rotations and residency interviews while training. It’s not an option anymore.

“This will be an incredible challenge! Now I will have to figure out how to balance both. It should be feasible,” says Thompson. “I’ve done it before!”