Veterans Apply Lessons From the Military to the Medical Profession

In military settings, teamwork is key to safe practices and successful outcomes. With this knowledge well ingrained, student-veterans at Rutgers Robert Wood Johnson Medical School are sharing the lessons of teamwork training and experience, uniting a growing group of students and faculty behind an initiative to bring about change.

After four years of meticulous research, planning, and initial implementation, their pilot team-building initiative is receiving significant local and national attention. It is ready to move to the next level: changes in the health care system culture.

The seeds of the program were sown in 2015 by then-first-year student-veterans Richard Lang and Kevin Fitzpatrick. Lang is a U.S. Naval Academy graduate and Pat Tillman Foundation Scholar with 12 years of active duty service as a Navy F/A-18 jet pilot and instructor at the Navy Fighter Weapons School (popularly called TOPGUN).

Fitzpatrick graduated in 2004 from Rutgers University with honors in electrical and computer engineering. As a 2007 U.S. Army enlistee, he completed the Special Forces Qualification Course and served as a Green Beret medic. On his last tour, in Afghanistan, he led a multinational assault team and earned a Bronze Star as a casualty care instructor.

Two weeks after his last military assignment, Lang matriculated at the medical school. That fall, he began volunteer service at The Promise Clinic, a student-run project that provides primary care for local, medically underserved and uninsured residents. Four-member clinical teams are composed of one student from each year that follow the same patients throughout medical school. Assuming that health care teams would apply teamwork principles similar to those followed in the military, Lang was intrigued to find key differences in the functioning of Promise Clinic teams. Team members did not convene before an appointment to agree upon goals, clarify roles and responsibilities, or discuss contingency plans. In addition, “debriefs” – meetings to identify areas for improvement during subsequent appointments – were not the norm.

In a clinical reflection for his “Patient-Centered Medicine” (PCM) course, Lang described the teamwork of military aviation missions. “The designated mission leader must hold a preflight briefing with all participating aircrew. They cover mission goals, roles and responsibilities, risk management, and contingency plans. After each mission, they hold a ‘debrief’ to review whether they accomplished mission objectives and identify areas for improvement,” he wrote.

“These practices are likely as important in improving outcomes in medicine as they are in military aviation,” Lang adds. “Consequences of errors are similar, but instead of risk to your own life as a pilot, it is a patient’s life that may be at risk.”

Early on, Lang and Fitzpatrick compared impressions of their early clinical experiences and found that the behaviors they had seen were not unique–both had observed areas where better teamwork and communication could have improved patient outcomes. They wondered if incorporating lessons learned from the military might be beneficial in medical school teams.

A Network of Champions

Lang received a strongly supportive response to his reflection from his PCM facilitator, Carol A. Terregino, senior associate dean for education and academic affairs, associate professor of medicine, and associate dean for admissions. She responded that she had read his report “with goose bumps,” recognizing, “in his Promise Clinic experience, a gap in the curriculum that had long been on my mind. Teamwork is not instinctive, and teamwork training could enhance productivity and patient safety.” She suggested that Lang and Fitzpatrick build a network among students and faculty and begin researching models of team training instruction that might be tailored to medical education. “Things need to change,” she added. “Perhaps your help and faculty support can be the answer to comprehensive curricular and cultural change.”

Meanwhile, the initiative had acquired its first “student champions.” Kristin N. Raphel ’19, a former EMT field supervisor, and Thomas Kuriakose ’19, a former high school teacher and coach, broadened the skill sets of the project leaders and shared the workload.

The TeamSTEPPS Model and Master Training

Researching the medical literature, the student project leaders discovered TeamSTEPPS (Team Strategies and Tools to Enhance Performance and Patient Safety), an evidence-based program designed to optimize team performance throughout the health care delivery system. While its primary goal is increasing health care teamwork and communication, its ultimate goal is the improvement of patient safety.

TeamSTEPPS was developed by the nonprofit Agency for Healthcare Research and Quality in conjunction with the Department of Defense, after fusing decades of data and best practices. The four project leaders chose TeamSTEPPS as the model for their initiative, based on the goals of the program, the depth of research behind it, and the degree to which it reflected the student-veterans’ experience.

All four leaders completed the TeamSTEPPS master trainer course, qualifying them, in turn, to train their peers. They then designed a student-led TeamSTEPPS intervention for the curriculum. “We hoped to provide fellow students with usable teamwork tools and strategies to improve patient care at every stage of their career,” says Lang.

The leaders designed a two-phase survey that would precede and then follow the TeamSTEPPS curricular intervention, providing the tools needed to assess current student teamwork behaviors and perceptions about teamwork in specified courses. In addition, the post-intervention survey would provide students’ observations about barriers to effective teamwork.

After approval by the Rutgers Institutional Review Board, the phase-one, pre-intervention survey was distributed to students throughout the medical school. It focused on three team-based settings: anatomy lab (M1s), interprofessional home visits (M2s), and Promise Clinic (students from all four years).

Responses to the pre-intervention survey indicated that a majority of medical students operating in team environments did not conduct routine briefs or debriefs. The survey also found that students strongly desired that teamwork training be integrated into the curriculum–with specific tools to help them become more effective team members.

Following administration of the pre-intervention survey, the student leaders conducted the TeamSTEPPS training intervention in 90-minute, interactive sessions for 650 students. With the endorsement of the Curriculum Committee, the training was integrated into the health sciences thread, where the program had found crucial early support. Integral to the training was distribution of a single-page “white coat pocket reference” of TeamSTEPPS tools for the students.

Responses to the post-intervention survey, taken about six months after the first survey, showed significant increases in the frequency of student briefings and debriefings, leadership behaviors, and student-perceived preparedness for team events. “We went from the pre-intervention survey, where 60 percent of students reported that briefing ‘sometimes or never’ happens, to the post-intervention response, in which 60 percent reported briefing ‘always or most of the time,’” says Lang. Student responses also helped to identify programmatic barriers: opportunities for improvement on subsequent curricular interventions.

An Unforeseen Champion and a New Leadership Team 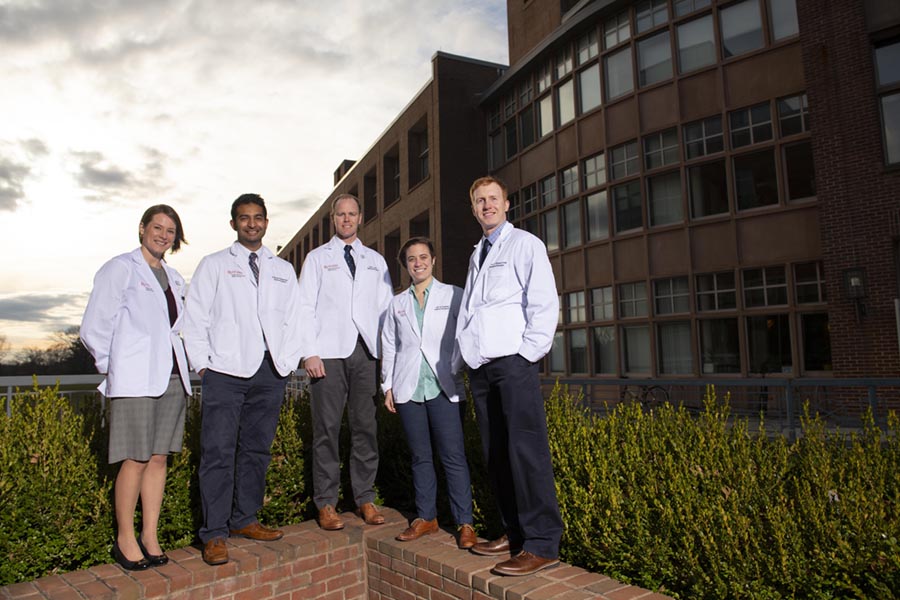 In 2018, soon after completion of the survey, the TeamSTEPPS project acquired an unforeseen new champion when Andy Anderson was appointed chief executive officer of the Combined Medical Group of RWJBarnabas Health and Rutgers Health. Anderson previously served for seven years at the 15-hospital Aurora Health Care system, in Milwaukee.

In leading a redesign of Aurora’s primary care practices, Anderson had used TeamSTEPPS and found that the program’s flexibility makes it effective in settings from interprofessional training to clinician skill development. Moreover, he says, its team-based approach leads to greater safety for patients and staff.

“Let’s meet and talk about how best to incorporate TeamSTEPPS into our practices,” Anderson wrote to Lang. “The students’ positive energy encourages the kind of non-hierarchical bottom-up top-down culture we need,” he added.

As a result of their work on TeamSTEPPS, two of the pilot program leaders earned their medical degrees with distinction: Lang’s in medical education and Raphel’s in leadership in academic health care. Lang will serve his residency in orthopedic surgery at the Naval Medical Center San Diego, where he looks forward to continuing his work on TeamSTEPPS. Both Raphel and Fitzpatrick are pursuing residencies in emergency medicine, while Kuriakose will serve his in pediatrics.

“The prior experience of our TeamSTEPPS leaders made them aspirational peers of all medical students, continually striving to advance medical education to the end goal: ensuring quality care and safety for patients,” says Terregino.

Although most of the pilot program leaders will graduate this year, a strong student base is ready to sustain the project’s momentum. Stephanie Latham ’21 – also a Pat Tillman Foundation Scholar and former Navy F/A-18 pilot – has worked with the group for two years. She will be leading a group of other M1 and M2 students to further refine TeamSTEPPS training and expand its reach within the curriculum.

This article was originally published in Robert Wood Johnson Medicine