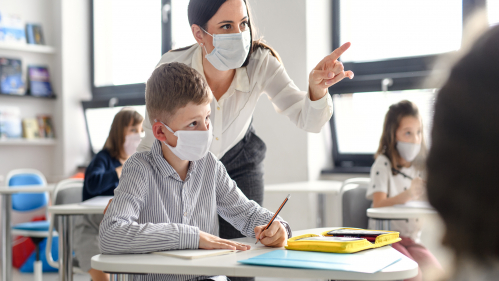 Most New Jerseyans are comfortable returning to normal; half think the state government has done "just right" on pandemic

As masks officially come off today for teachers and children, a majority of New Jerseyans agree with lifting the childcare and school settings mask mandate, according to the latest Rutgers-Eagleton Poll.

“The school mask mandate is one of the last visible public health emergency measures in the Garden State, and its end is a welcomed one for many New Jerseyans, according to our numbers,” said Ashley Koning, an assistant research professor and director of the Eagleton Center for Public Interest Polling (ECPIP) at Rutgers University–New Brunswick. “Parents especially agree with ending the mandate, as do partisans of all stripes, though to varying degrees. Nevertheless, disagreement is sizable and reflects the debate surrounding the issue of masking that often pits politics and public health against one another.”

Agreement with ending the mask mandate coincides with a shift in New Jerseyans’ views about the pandemic overall. Concern over COVID-19 remains at an all-time low since last June: 14 percent are currently “very worried” they or someone in their household will get sick from the coronavirus, 28 percent are “somewhat worried,” 26 percent “not very worried,” and another 32 percent “not worried at all.” Concern is now half of what it was at the start of the pandemic two years ago.

Residents are even loosening their own mask usage: 35 percent now say they are masking indoors in public spaces “all the time” (down from 62 percent in June), 22 percent “most of the time,” 17 percent “some of the time,” 11 percent “rarely,” and 15 percent “never.”

Despite these lightened attitudes, residents are still split on whether they feel the pandemic is over, particularly whether we are almost there or have a long way to go: 12 percent say it is “completely” over, 30 percent say it is “mostly” over, 21 percent say “halfway over,” and 29 percent say “far from over”; 6 percent believe it will never end, and 2 percent are unsure. This is little changed from June 2021.

“Over half of New Jerseyans think that the pandemic is not technically over, but they are mentally and emotionally ready for it to be,” Koning noted. “Many New Jerseyans are reentering life and returning to normal despite knowing the pandemic will be around for a while.”

On the heels of Murphy’s final COVID briefing, just under half (49 percent) of New Jerseyans think the measures the New Jersey state government took to deal with the virus since the start of the COVID-19 pandemic were “just right” when they look back on the past two years. Thirty-two percent say the state went “too far,” and 17 percent say “not far enough.”

“The pandemic has become yet another divisive issue that has political ramifications for local, state, and federal elections in the near future,” said Koning. “Views on how the state has handled the pandemic have grown more divided since the start of all this two years ago.”

Over half of those vaccinated (55 percent) would probably be willing to get a COVID-19 vaccine booster if public health officials recommend it about every six months; 38 percent say they would not be willing, and 7 percent are unsure.

Results are from a statewide poll of 1,044 adults contacted by live interviewers on landlines and cell phones from February 25 – March 4. The full sample has a margin of error of +/- 3.5 percentage points.