NEW BRUNSWICK, N.J. – Social awareness streams like Twitter and Facebook are mostly populated by a new category of Internet users known as “meformers”: a term coined by Rutgers researchers.

In a study of Twitter, a microblogging service used by millions of people from high school students to national elected officials, Mor Naaman and Jeffrey Boase found that 80 percent of regular users are “meformers,” people who use the platform to post updates on their everyday activities, social lives, feelings, thoughts and emotions. The remaining 20 percent – “informers” – share information, have larger social networks and are more interactive with their followers. (Read their paper here.)

Naaman and Boase are assistant professors at Rutgers’ School of Communication and Information. Naaman and Boase, along with co-author Chih-Hui Lai, will present the paper in February 2010 at the ACM Conference on Computer Supported Cooperative Work in Savannah, Ga. Lai is a graduate student in the school’s doctoral program.

“Informers” are more likely to post messages that share information (such as news links), where “meformers” tend to focus on what the researchers call “Me Now” messages – posts that update a user’s followers about that users thoughts, location or immediate situation.

Informers tend to be embedded and active in social awareness streams. They have more friends and followers and they interact with those people much more than “meformers,” the study results found.

“While meformers typically post messages relating to themselves or their thoughts, informers post messages that are informational in nature,” the authors wrote.

Indeed, for the bulk of Twitter users it is “all about me.” But Naaman and Boase suggest that this seemingly narcissistic activity actually helps users maintain and grow friendships and other relationships in a manner not previously possible through other communication technologies.

“Although the meformers’ self-focus might be characterized by some as self-indulgent, these messages may play an important role in helping users maintain relationships with strong and weak ties,” the authors wrote. 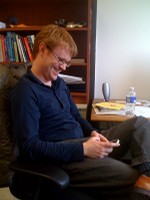 The authors refer to these applications as “social awareness streams,” a term that reflects the diversity of content distributed and shared on Twitter, Facebook and their social media peers. The phrase also reflects the nature of the content delivery: a steady trickle of information occurring nearly in real time.

People use Twitter to share news and information, promote themselves and their enterprises, offer opinions, blurt random thoughts and statements, ask questions of their followers, announce their locations in actual and virtual space and share jokes and anecdotes, the research found.

The authors used data from Twitter to categorize more than 3,000 messages from 350 Twitter users. “me-now” messages made up about 40 percent of the total dataset.