The Story of O

Looking to master the art of love? Try starting with the science 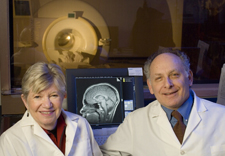 Credit: Nick Romanenko
Sex researcher Beverly Whipple, professor emerita, Rutgers' College of Nursing, teamed up with Barry Komisaruk, a neuroscientist at Rutgers–Newark, to write a book about the complex biological processes behind orgasm.

Beverly Whipple once promised an anesthesiologist that if he successfully brought her through surgery, then, and only then, would she reveal to him the secret of male multiple orgasms.

Whether this professor emerita of Rutgers’ College of Nursing delivered – well, that’s between her and her anesthesiologist. But for anyone who is interested in the subject of orgasm – and who isn’t? – what Whipple and  Barry Komisaruk, a neuropsychologist at Rutgers–Newark, share in their new book, The Science of Orgasm (Johns Hopkins, 2006), is nothing less than a comprehensive survey of everything scientists know about the complex biological processes leading to orgasm.

Much of that knowledge comes from the pair’s own 25-year research collaboration. Whipple, a registered nurse and sex educator who, in 2006, was named one of the world’s 50 most influential scientists by New Scientist magazine, studies women’s sexuality, while Komisaruk, who is a Rutgers Board of Governors Distinguished Service Professor, focuses on the sensory pathways of pain and pleasure.

“We realized from the first day we met that our research matched perfectly,” says Whipple, the pioneering sex researcher who helped name the G spot, affirmed the phenomenon of female ejaculation, and proved that women can climax through fantasy alone.

Together, Whipple and Komisaruk have documented the pain-blocking effects of vaginal stimulation; mapped the specific brain areas that are activated during orgasm; and identified a route through which women with complete spinal cord injury can reach orgasm – the vagus nerve, which bypasses the spine to directly connect the genitalia and the brain. Using advanced brain-imaging techniques, the pair has shown that even nongenital stimulation can activate the orgasmic regions of the brain, potentially validating the experiences of people who claim to climax in dreams or through stimulation of the neck, breast, mouth – even the knee and the big toe.

So is pain – and, ironically, both pain and pleasure register in the same areas of the brain, as Whipple and Komisaruk have shown in the brain scans of volunteers. Pain and pleasure, those strange bedfellows of the brain, have a rather close relationship. “Think of the facial expressions of orgasm,” suggests Komisaruk. “People take on the appearance of agony – almost like virtual pain – during orgasm.” In fact, their brain-imaging studies show that women can withstand up to 100 percent more pain during an orgasm; in essence, the brain pushes out the pain to make way for the pleasure.

The ability to monitor brain activity in real time – as Whipple and Komisaruk do with a sophisticated brain-imaging technique called functional MRI (fMRI) – raises the intriguing possibility of teaching people to control their perceptions of pain or pleasure. The duo are about to launch a study to determine whether women can use fMRI as a biofeedback tool to enhance their sexual pleasure.

“Women will watch their own brain images during different kinds of self-stimulation to determine ‘what works,’” explains Whipple. If a woman sees that a certain technique activates the pleasure centers of her brain, she may just have found her pathway to paradise. Adds Whipple, with a laugh, “We have never had any trouble getting volunteers for our studies.”