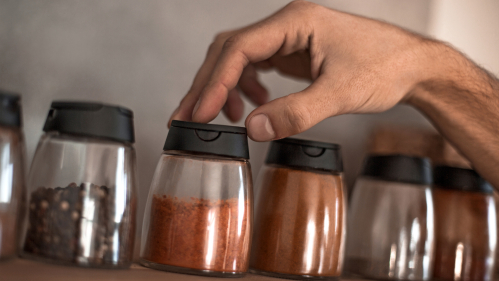 A government-funded study on the potential for cross-contaminating kitchen surfaces with pathogens during food preparation has pointed to an unlikely culprit for spreading sickness: spice containers.

Detailing findings in the Journal of Food Protection, Donald Schaffner, a Distinguished Professor in the Department of Food Science at the Rutgers School of Environmental and Biological Sciences who co-authored the study in collaboration with North Carolina State University colleagues, concluded that when consumers are preparing meals, spice containers can easily become cross-contaminated with health-threatening microorganisms. Cross-contamination is the process by which microbes are transferred from one substance or object to another, often with harmful effects.

The study was commissioned by the U.S. Department of Agriculture’s (USDA) Food Safety and Inspection Service.

“In addition to more obvious surfaces like cutting boards, garbage can lids and refrigerator handles, here’s something else that you need to pay attention to when you’re trying to be clean and sanitary in your kitchen,” Schaffner said. “Our research shows that any spice container you touch when you're preparing raw meat might get cross-contaminated. You’ll want to be conscious of that during or after meal preparation.”

Foodborne illnesses such as non-typhoidal Salmonella and Campylobacter account for nearly 2 million infections per year in the U.S., according to studies by the U.S. Centers for Disease Control and Prevention (CDC). A significant portion of those illnesses are derived from USDA-regulated food products, including chicken, turkey, beef, pork and game, according to the Interagency Food Safety Analytics Collaboration, a group formed in 2011 by the CDC, the USDA’s Food Safety and Inspection Service and the U.S. Food and Drug Administration. Scientists said they believe proper handling of food – including adequate cooking, consistent handwashing and sanitizing of kitchen surfaces and utensils – can combat cross-contamination.

“The purpose of this study was to determine the prevalence and degree of cross-contamination across a variety of kitchen surfaces during a consumer meal preparation event,” said Schaffner, who also is the Rutgers Agricultural Experiment Station’s Extension Specialist in Food Science

Researchers monitored the behavior of 371 adults cooking an identical turkey burger recipe in several kitchens of various sizes, ranging from small apartment-style kitchens to larger teaching kitchens, in extension centers and food banks. Participants prepared a meal consisting of raw ground turkey patties with a seasoning recipe, along with a prepackaged salad. To simulate the movement of a pathogen across a kitchen, researchers inoculated the meat ahead of time with a bacteriophage known as “MS2” to serve as a safe tracer. Bacteriophages are viruses that infect bacteria and have no effect on humans.

Participants weren’t informed that researchers would be examining their food safety behaviors until after they had prepared the meal. Once the meal had been prepared, researchers swabbed kitchen utensils, cleaning areas and kitchen surfaces to test for the presence of the MS2 tracer. Based on observations of participants’ behavior during cooking, researchers decided to take samples from some new categories of surfaces, such as spice containers and sink faucet handles.

“We were surprised because we had not seen evidence of spice container contamination before,” Schaffner said. “Most research on the cross-contamination of kitchen surfaces due to handling of raw meat or poultry products has focused on kitchen cutting boards or faucet handles and has neglected surfaces like spice containers, trash bin lids and other kitchen utensils. This makes this study and similar studies from members of this group more comprehensive than previous studies.”