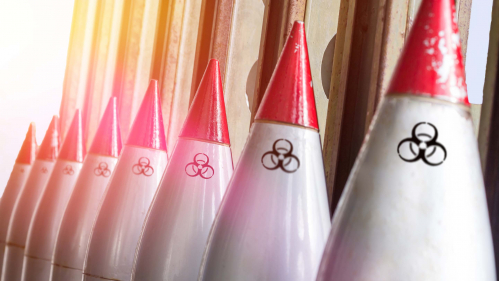 A team that includes Rutgers scientists has designed a synthetic protein that quickly detects molecules of a deadly nerve agent that has been classified by the United Nations as a weapon of mass destruction and could be used in a chemical warfare attack.

This development could pave the way for a new generation of tailor-made biosensors and treatments that could be deployed against the chemical warfare agent VX, scientists said.

As described in Science Advances, the team created the protein through a special design on high-speed computers in Rutgers laboratories.

“We’ve made an artificial protein that binds a chemical target – in this case, the VX nerve agent,” said Vikas Nanda, an author on the study and a scientist at Rutgers’ Center for Advanced Biotechnology and Medicine (CABM). “We wanted to design it to generate a signal that could be coupled to a device, making a biosensor for chemical weapons. And we’ve been able to achieve that.”

VX is an odorless, tasteless, human-made chemical compound that is the most toxic and rapidly acting of any of the known chemical warfare agents. It works by attacking the nervous system, causing muscle paralysis and death via asphyxiation within minutes. Because VX is classified as a weapon of mass destruction, countries are banned from stockpiling it. However, nations are permitted to store small amounts for research.

The Rutgers team designed the protein to have a cavity at its center that matched the precise shape and chemical composition of VX. Collaborators at the City College of New York took the Rutgers design and produced a real version of the protein, purified it and shipped the sample on ice overnight to an approved chemical weapon testing facility, MRIGlobal in Kansas City, Missouri. There, the protein was tested against VX within 24 hours.

“The protein underwent a dramatic shape change, burying VX in the cavity we designed,” said Nanda, who also is a professor in the Department of Biochemistry and Molecular Biology at Rutgers Robert Wood Johnson Medical School. “This shape change is the signal which could be coupled to a sensor device.”

The protein, Nanda said, can detect VX at levels a thousand times more sensitive than current technologies. In addition, the protein doesn’t produce false positives that occur when present-day sensors accidentally detect non-nerve agent chemicals which are similar, like some pesticides.

According to the website of the U.S. Centers for Disease Control and Prevention, VX or other nerve agents were possibly used in chemical warfare during the Iran-Iraq War in the 1980s. Chemical weapons experts have alleged it also has been used more recently in warfare and, in one case, an assassination. While antidotes are available for VX, they are most useful if given as soon as possible after exposure.

“The design method presented here should enable the development of a new generation of biosensors, therapeutics and diagnostics,” Nanda said.