When Paul Robeson graduated from Rutgers in 1919, he thought he’d become a lawyer. But soon after he earned a degree from Columbia and landed a job with a law firm, a secretary who was white refused to take dictation from him because he was black. Robeson quit – not just the job, but the profession, too.

“He was hoping to be accepted on the basis of merit, merit that transcends race,” explains Wayne Glasker, an associate professor specializing in African-American and 20th-century U.S. history at Rutgers University-Camden. “But he was judged on the basis of color.”

Fortunately, there was a plan B – one formulated, in part, by Robeson’s newlywed, Eslanda Goode, who had encouraged him to pursue acting and singing. It didn’t hurt that they were participants in the Harlem Renaissance, a social and cultural movement of black artists and intellectuals. 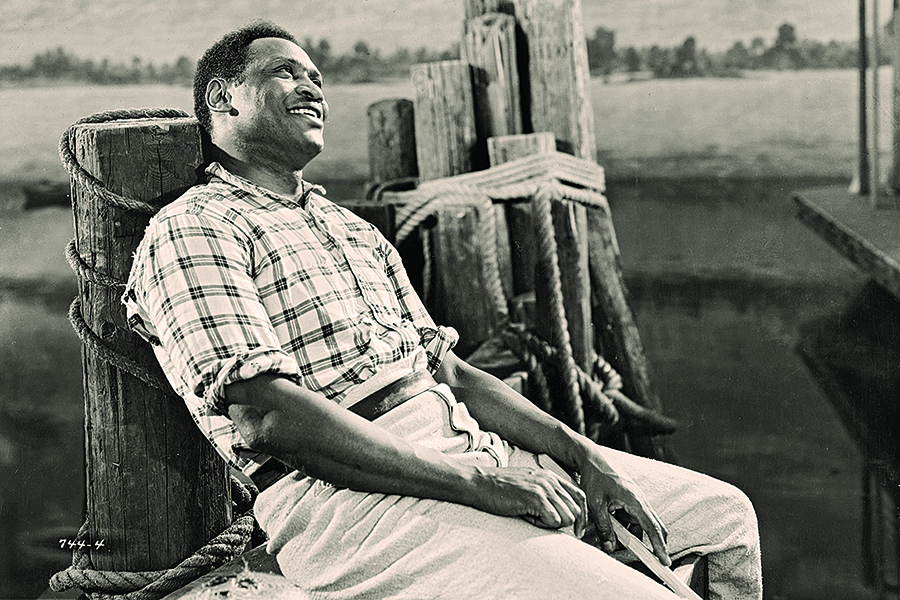 Robeson was famous for his film and stage appearance as Joe in Showboat (photo: John D. Kisch/Getty Images)

Robeson was a shining example. The singer and scholar, having already appeared in off-Broadway productions, drew the attention of the Provincetown Players, including cofounder Eugene O’Neill. In 1924, he recruited Robeson to star in two of his plays, All God’s Chillun Got Wings and The Emperor Jones. Robeson hadn’t formally trained as an actor, but he earned favorable reviews and an acting career was born.

Although he lacked technique, “he had a commanding presence; he was very charismatic,” Glasker notes. Andrew Flack, a playwright who cocreated I Go On Singing, a multimedia musical account of Robeson’s life, adds: “He was an Adonis, a David, and he had that voice.”

It was the melodious bass-baritone Robeson had used in his pastor father’s churches, in vocal performances at Rutgers and at paying gigs. His singing was inspired by a wellspring of Negro spirituals that he had heard throughout his childhood. But not until he teamed up with Lawrence Brown, an accomplished pianist-arranger, did he consider concentrating solely on those songs. In April 1925, in a Greenwich Village theater in New York City overflowing with a mixed-race audience, the duo did just that, prompting 16 calls for encores and raves from critics, one calling Robeson “the new American Caruso.”

Over the next three decades, Robeson balanced acting with singing—selling out concerts, producing albums and traveling internationally. His exposure to foreign cultures prompted Robeson to add popular folk songs from around the world to his own repertoire. And there was one stage production in particular that married his acting and singing talents memorably.

Show Boat, a wildly popular 1930s musical, featured Robeson in the role of Joe, an amiable stevedore. The part was small, but it gave him the chance to sing “Ol’ Man River,” which was later immortalized on film. “There are people who know almost nothing about Paul Robeson but remember him as Joe singing ‘Ol’ Man River,’” says Glasker.

The role, however, perpetuated a stereotype Robeson would come to despise. The theatrical world “never understood how to use him because they didn’t have the material for him,” Flack says. “He was way ahead of his time. They couldn’t imagine a story about an intelligent, complicated black man.”

The one exception was Othello, Shakespeare’s tale of a Moorish army general who murders his white wife after she’s falsely accused of cheating on him. While that storyline was, as Glasker says, taboo at the time, Robeson eagerly dove into the role thrice during his career – first in 1930, as an actor still in training, and second in a 1943-44 Broadway production, which ran for 296 performances and established him as the era’s definitive Othello.

Robeson, at that time, “was one of the best-known humans in the world,” Flack says. “Here was an educated, erudite, sophisticated man. A world traveler, a jet-setter. He knew everybody; everybody knew him. He was truly a modern American man.”

But he was also headed for trouble. By the time World War II began, Robeson’s left-leaning political views and support of Joseph Stalin had drawn the attention of the federal government, which, in 1950, revoked his passport – in effect putting his performing career on hold. Nine years later, after his passport had been reinstated, Robeson took a third stab at Othello, in a London production. But his career, aside from occasional concerts, was all but over. A year later, his health in decline, he ceased performing altogether.

He had, however, opened the door for a new generation of actors and singers – among them Sidney Poitier and Harry Belafonte – who took on roles and performed songs rooted in the black experience.

Salamishah Tillet, professor of African-American and African studies and associate director of the Clement A. Price Institute on Ethnicity, Culture, and the Modern Experience at Rutgers University–Newark, says of that legacy: “He’s an exceptional figure because he’s proof of this idea of trying to use one’s talents and genius to create a space for others and to create a freedom trail for others.”