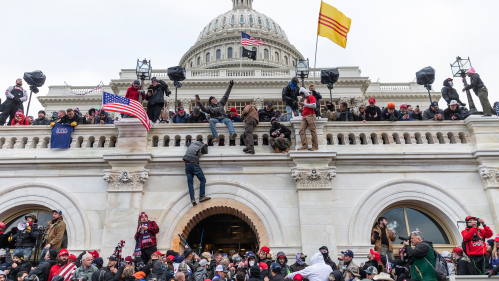 More than half (56 percent) of New Jersey residents believe that the attack on the United States Capitol on Jan. 6, 2021 was an insurrection and a threat to democracy, according to a new Rutgers-Eagleton poll.

The poll – the latest snapshot of public sentiment as the House Select Committee resumes its investigation on the Jan. 6 attack this month – found, on the other hand, that 16 percent view it as “an unfortunate event,” that was “in the past, so no need to worry about it anymore.” Another 16 percent believe it was a political protest protected under the First Amendment, while 7 percent don’t share any of those views and 5 percent are unsure.

Regardless of which side they fall on regarding Jan. 6, most New Jerseyans are worried about the future of America’s democracy (58 percent “very,” 28 percent “somewhat”).

“Election integrity and the events that took place on Jan. 6 are becoming defining issues for the upcoming midterm elections, and for American politics and the two major political parties more broadly,” said Ashley Koning, an assistant research professor and director of the Eagleton Center for Public Interest Polling  (ECPIP) at Rutgers University–New Brunswick. “We see a stark partisan divide when it comes to interpreting the 2020 election and the incidents on Jan. 6, indicating that – even in New Jersey – Republicans mainly side with Trump and the Republican Party’s narrative.”

“The Eagleton Poll survey data confirm the reality and challenge, even in New Jersey, of a divided America,” said John J. Farmer, Jr., Director of the Eagleton Institute of Politics.  “The continuing divergent interpretations of the purpose and meaning of the events of January 6, 2021, raise the disturbing possibility that the events of January 6 were not a culmination, but a prelude.”

There are sharp partisan divides on the incident. Democrats overwhelmingly call Jan. 6 an “insurrection and a threat to democracy” (88 percent), and likewise call the events a “protest aimed at overturning the results of a legitimate election” (91 percent).

Republicans are more mixed— 58 percent say the events were to protest an illegitimate election versus 22 percent who say the election was a legitimate one and 20 percent are undecided about the intentions.

Similarly, 38 percent of Republicans feel the protest was permissible under the First Amendment and 37 percent label the events as unfortunate but in the past; 15 percent of this group agree it was an insurrection.

Half (51 percent) of independents call Jan. 6 an “insurrection” and slightly more than half (54 percent) say it was a “protest aimed at overturning the results of a legitimate election.” The remainder of independents are split.

Three-quarters (74 percent) of Democrats say they are following the hearings “somewhat” to “very” closely, compared with half (49 percent) of independents and slightly less than half (45 percent) of Republicans.

“Important voting blocs like women and Black residents are more likely than their counterparts to label Jan. 6 an ‘insurrection’ and a ‘protest aimed at overturning the results of a legitimate election,’” noted Jessica Roman, research associate at the Eagleton Center for Public Interest Polling. “Women are also more worried than men when it comes to the future of American democracy.”

The results are from a statewide poll of 1,018 adults contacted by live interviewers on landline telephones and cell phones from July 18 to July 27. The full sample has a margin of error of +/- 3.8 percentage points.