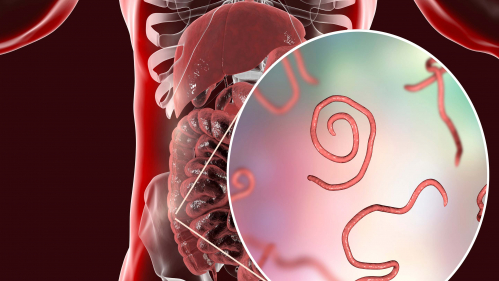 A study of how injured mouse cells trigger immune responses suggests novel strategies for preventing and treating everything from parasites to allergies in humans.

Researchers hypothesized that gut cells damaged by parasitic worms summon the immune system by releasing adenosine triphosphate (ATP), which is metabolized into the nucleotide adenosine. Adenosine, in turn, binds to specific receptors on the surface of intestinal epithelial cells to trigger an immune response.

Members of the research team — who hail primarily from Rutgers and Columbia, but also include investigators from Harvard, the University of Texas-Houston and the University of Ferrara — tested their theory by injecting worms into mice engineered to lack adenosine receptors on their epithelial cells. Unlike regular mice, which mount a robust immune response to these parasites, the specially engineered mice mounted a markedly reduced immune response.

Parasitic worms known as helminths infect about 1.5 billion people, according to the study. A vaccine isn’t available, but this discovery about how the body naturally defends itself against helminths opens an avenue for development.

“If you combined a protein that’s unique to helminths with an agonist that could trigger the adenosine receptor, you might be able to create a vaccine that would sensitize the immune system,” said senior author William Gause, the director of the Rutgers Institute for Infectious and Inflammatory Diseases (i3D), who is at Rutgers New Jersey Medical School. When actual infection occurred, the memory immune response would be faster and stronger.”

“On the other side, this finding suggests that it may be possible to treat allergies, which are basically unwanted immune responses, with medications that block adenosine receptors and reduce the immune response and associated harmful inflammation,” Gause said.

So-called danger signals released by injured cells are one of the two main ways the immune system learns of attackers. These signals are less understood than the other immune system trigger, molecules released by pathogens that are recognized by specific receptors on immune cells.

Gause said release of ATP may prove to be a common and important danger signal for injured cells. Every cell in the body contains ATP that can release when injured.

The researchers plan a follow-up study that will explore whether lung cells use the same signal to alert the immune system of invaders.