New Digs for Willie the Silent

Rutgers’ iconic Willie the Silent statue has graced the Voorhees Mall on the New Brunswick campus for more than 90 years. It’s a storied landmark that has inspired pranks, is a source of folklore, and was even named in The Huffington Post as one of the most loved statues on an American campus.

The area surrounding the statue, which honors the William I, Prince of Orange, the leader of a Dutch revolt that led to independence in the Netherlands, recently received some upgrades that give visitors a place to sit and reflect and to appreciate a site that has become a defining part of Rutgers’ identity. 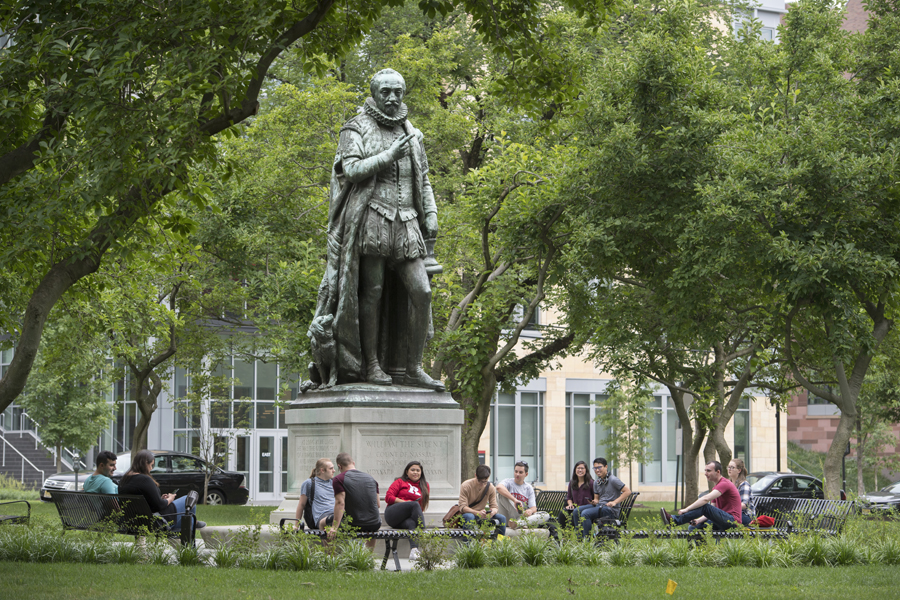 The improvements were fully funded by a donation from Don Pray, who is getting ready to celebrate his 50th class reunion at Rutgers, and his wife, Penny, a 1970 Douglass College graduate.

“We have always loved Willie,’’ said Penny Pray. “It’s a beautiful statue, and we view it as a source of pride for Rutgers. We are very proud of our personal history with Rutgers and are happy to help bring a piece of Rutgers heritage back to its full glory.’’

The project was inspired when the Westfield, N.J., couple was visiting the campus in the spring of 2017. They were standing at the plaza adjacent to the new Rutgers Academic Building on Seminary Place, less than 200 feet from the statue, but they couldn't see it because trees obstructed the view. When they went to pay Willie a visit, the couple had an uncomfortable walk through wet grass and mud.

“Willie was looking good, but we thought things could be better so we started thinking of how the site could be improved,’’ Don Pray said. “We feel that Voorhees Mall is like our Central Park, with Old Queens on one end, the new Academic Building at the other end, and many old historic buildings on the flanks.’’

The couple reached out to the university and worked with head landscape architect Brian Clemson, who supervised the planning and execution of the upgrades.

The project expanded the size of the bluestone plaza around Willie and added three bluestone sidewalks leading up to the statue to enhance visitor access. Other improvements include the addition of six black iron benches and new LED lighting. Nearby trees were pruned by an arborist to provide an unobstructed view of Willie from different angles.

“It’s a place now where you can sit and have a conversation or be in your thoughts,’’ said Don Pray, whose vision for the site was inspired by visits to parks in European cities and other landmark American universities. “The point was to create a place for more moments to linger.’’

Willie the Silent is meaningful at a large university like Rutgers because it helps students build a connection, said Angus Gillespie, a professor of American studies who teaches about Willie the Silent in a course on American folklore.

“The Voorhees Mall invokes an old-time Ivy League feel that is a source of pride for Rutgers students,’’ Gillespie said. “It’s a place you can take your parents and relatives, or your date, and impress them with this historic statue. It’s reassuring for students to be tied to something that has tradition.’’