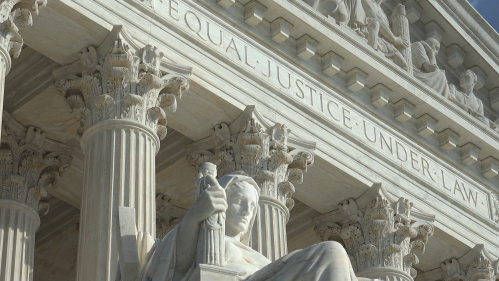 Two-thirds disagree with overturn of Roe, worry about court overturning other individual rights

The majority of New Jerseyans don’t have trust in the U.S. Supreme Court, according to a new Rutgers-Eagleton poll.

As justices start the new term today after overturning Roe v. Wade, the landmark ruling that established the constitutional right to abortion, six in 10 New Jerseyans say they don’t have much trust (26 percent) or any trust at all (35 percent) in the judicial branch to operate in the best interests of the American people.

Just 17 percent say they trust the Court a “great deal,” and 20 percent say a “fair amount.”

“The U.S. Supreme Court’s overturning of Roe has revived the Culture Wars in American Politics and has impacted perceptions of the Court itself,” said Ashley Koning, an assistant research professor and director of the Eagleton Center for Public Interest Polling (ECPIP) at Rutgers University–New Brunswick. “Much like the rest of the country, more New Jerseyans disagree than agree with some of the biggest rulings that came out of the most recent term.”

On the other hand, half (50 percent) agree with the Court upholding a public school football coach’s right to a postgame prayer on the field and declaring his firing for the prayer as a violation of his constitutional rights (40 percent disapproved of the decision).

Thinking of the future, 51 percent of New Jerseyans are “very concerned” and 14 percent are “somewhat concerned” that the Supreme Court’s decision to overturn Roe v. Wade could lead the way to overturning other decisions where the Court has recognized substantive due process claims to other individual rights, such as contraception, same-sex relationships and same-sex marriage. Eleven percent say they are “not very concerned,” and 22 percent say “not at all concerned.”

Partisanship permeates all views about the Court and its decisions. Republicans are much more trusting of the Court (64 percent “great deal” or “fair amount”) than Democrats (18 percent) or Independents (38 percent) and are much more likely than their counterparts to believe the Court has just the right amount of power (66 percent). Democrats, on the other hand, feel the Court has too much power (73 percent), while independents are split between saying it has too much (48 percent) or just the right amount of (44 percent) power.

Partisan differences also emerge in level of concern about overturning other decisions involving individual rights. Almost all Democrats (88 percent) and a solid majority of independents (63 percent) are concerned at some level about the possibility, while two-thirds (65 percent) of Republicans are not concerned.

“The Court has been a major motivating force for Republicans, yet there is some indication that Dobbs and the overall rightward swing of the Court may be motivating Democratic candidates and voters right now,” said Kyle Morgan, research associate at the Eagleton Center for Public Interest Polling. “The upcoming midterms will be a true test as to whether the Court now motivates Democrats as it has Republicans in the past.”

Other key demographics split in their views about the Supreme Court, as well. Women (61 percent) are more likely than men (41 percent) to believe the Supreme Court has too much power, more likely than men to have little trust in the Court (71 percent “not very” to “not much at all” versus 48 percent), disagree with the Court’s decisions at higher rates than men, and are more concerned than men when it comes to the possibility of future decisions overturning individual rights (73 percent “very” to “somewhat versus 58 percent).

The results are from a statewide poll of 1,018 adults contacted by live interviewers on landlines and cell phones from July 18 to July 27. The full sample has a margin of error of +/- 3.8 percentage points.