Honoring the Legacy of Paul Robeson 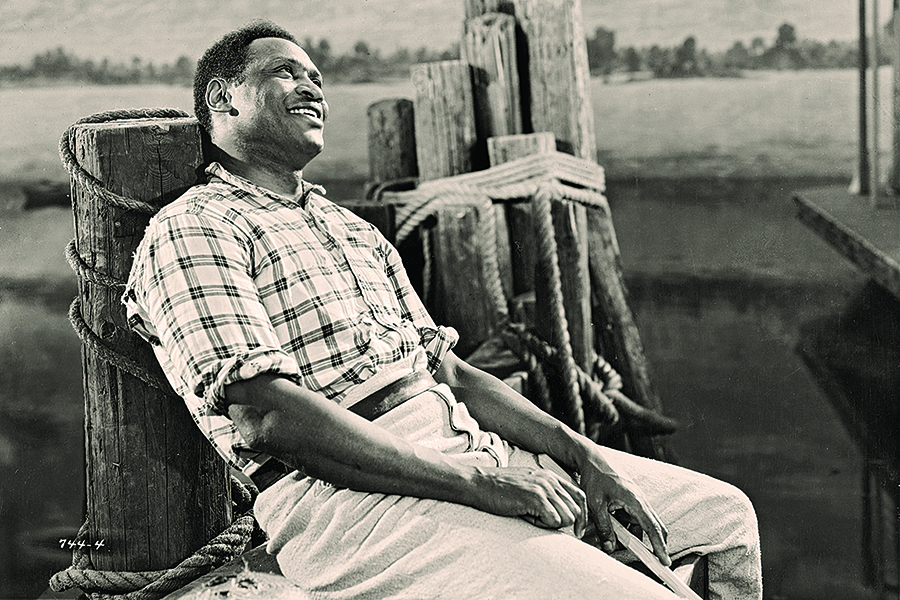 When Paul Robeson graduated from Rutgers in 1919, he thought he’d become a lawyer. But soon after he earned a degree from Columbia and landed a job with a law firm, a secretary who was white refused to take dictation from him because he was black. Robeson quit – not just the job, but the profession, too.

“He was hoping to be accepted on the basis of merit, merit that transcends race,” explains Wayne Glasker, an associate professor specializing in African-American and 20th-century U.S. history at Rutgers University-Camden. “But he was judged on the basis of color.”

Fortunately, there was a plan B – one formulated, in part, by Robeson’s newlywed, Eslanda Goode, who had encouraged him to pursue acting and singing. It didn’t hurt that they were participants in the Harlem Renaissance, a social and cultural movement of black artists and intellectuals.

Robeson was a shining example. The singer and scholar, having already appeared in off-Broadway productions, drew the attention of the Provincetown Players, including cofounder Eugene O’Neill. In 1924, he recruited Robeson to star in two of his plays, All God’s Chillun Got Wings and The Emperor Jones. Robeson hadn’t formally trained as an actor, but he earned favorable reviews and an acting career was born.

Read more about the beginning of Robeson's acting and singing career. 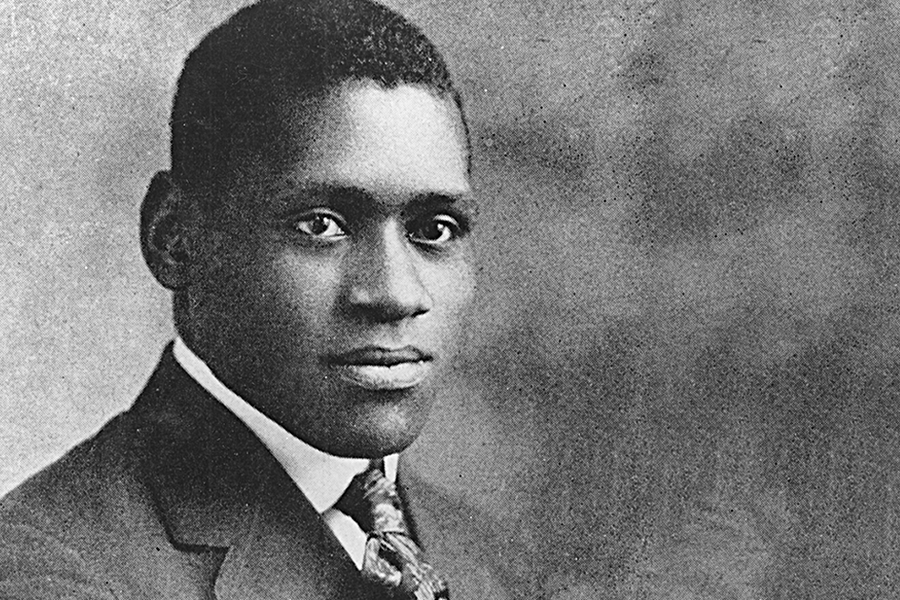 A year after his father died, Paul Robeson stood before the mostly white audience gathered for Rutgers’ 1919 Commencement and delivered an address that he had entitled “The New Idealism.” From a young age, the 21-year-old had been trained by his father, William, a former slave turned pastor, in both the classics and oratory. So vocal delivery was perhaps as important as the message. But he did have something important to say.

Unity, Robeson told the crowd at the Second Reformed Church in New Brunswick, “is impossible without freedom, and freedom presupposes a reverence for the individual and a recognition of the claims of human personality to full development. It is therefore the task of this new spirit to make national unity a reality, at whatever sacrifice, and to provide full opportunities for the development of everyone.”

Over four years, Robeson had amply demonstrated his “development” – as a star athlete, a Phi Beta Kappa member and an oratorical champion, among other achievements. His late father, who’d pressed all five of his children to exceed expectations, would have been proud. But in 1919, “national unity” was a pipe dream. Segregation was the law of the land, lynching was rampant in the South and the Ku Klux Klan, glorified in D.W. Griffith’s film The Birth of a Nation, was newly reborn and empowered.

As Wayne Glasker, an associate professor of African-American and 20th-century U.S. history at Rutgers University-Camden, points out, “With World War I now over, we had made the world ‘safe for democracy,’ but there was no racial equality at home.”

Beating Princeton to Settle a Score 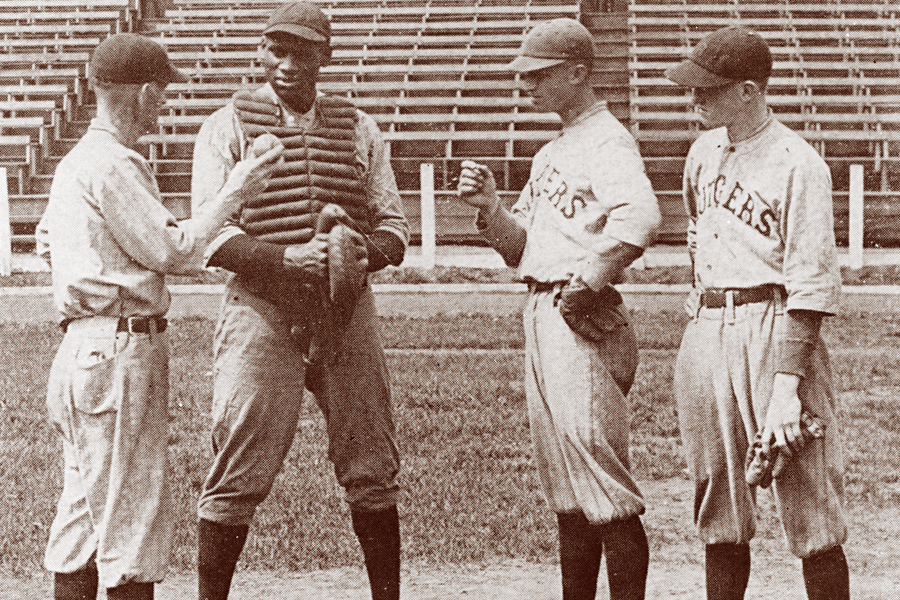 On Paul Robeson’s last day at Rutgers, one of his dreams came true. And it didn’t take place on the football field or in a classroom. It happened on the baseball diamond. Rutgers beat Princeton, a feat that had eluded Robeson since his first year.

But beating Princeton wasn’t all he achieved at Rutgers from 1915 to 1919. By that time, Robeson had received 12 varsity letters in four sports and dabbled in a singing career that would blossom just a few years later. Such accomplishments are evidence that, while at Rutgers, Robeson displayed seemingly limitless talent even as his career path and affinity for justice were already taking shape.

As a Rutgers athlete, Robeson’s top sport was undoubtedly football, for which he’d become legendary.On the baseball team, he was a solid catcher, but not much of a hitter, with a batting average of less than .200. And in track and field, he was considered a decent shot-put, javelin and discus thrower.

But playing basketball, at center or forward, he was also regaled as exceptional. To earn extra money, on weekends and holidays, he even played for a semi-pro team, the St. Christopher Club in Harlem, considered one of the best in the country at the time. Singing, however, brought more income for him, landing gigs at private parties and church events. It only made sense; with his deep bass-baritone, Robeson sang every chance he got, even if money wasn’t involved, as friends would later attest. 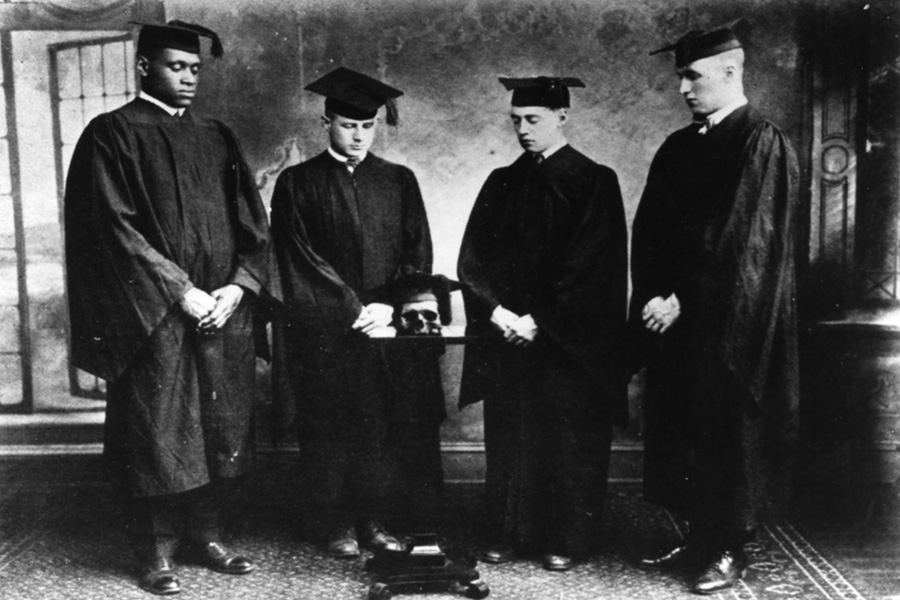 In spring 1918, Paul Robeson, a junior at Rutgers, was beyond distraught. His beloved “Pop,” William Robeson, was dying. Paul had a big oratorical competition coming up, one for which he’d won the top prize two years running. But how could he consider attending? His father, a 73-year-old church pastor who had trained Paul in oratory since he was a boy, decided the matter. You compete, he told his son, no matter what.

On May 20, three days after William died, Paul delivered “Loyalty and the American Negro,” a speech about African-American participation in war, and once again earned first place. He repeated that feat his senior year, capping a first-rate oratorical stint at Rutgers, where, aside from being a football star, he distinguished himself in various other ways, including persevering in the face of bigotry.

“There was an awareness of the pain of what it meant to be a black man in American society while simultaneously realizing what he had to do to succeed,” says Edward Ramsamy, associate professor in and chair of the Department of Africana Studies at Rutgers University-New Brunswick. “You always see that tension in Robeson.”

In 1915, when he enrolled as a first-year student, Rutgers was 149 years old and had fewer than 500 students. Only two African-American students had attended the university, so, at age 17, Robeson “would have felt lonely, but he also might have felt like a trailblazer,” says Wayne Glasker, an associate professor who specializes in African-American and 20th-century U.S. history at Rutgers University-Camden.

In academics and extracurricular activities he certainly behaved that way. Having been tutored in the classics by his father – a former slave who had earned two master’s degrees – Robeson excelled at most of his courses and tutored classmates in Latin and Greek. He was inducted into Phi Beta Kappa during his junior year and Cap and Skull honor society his senior year as one of four students chosen for all-around excellence. 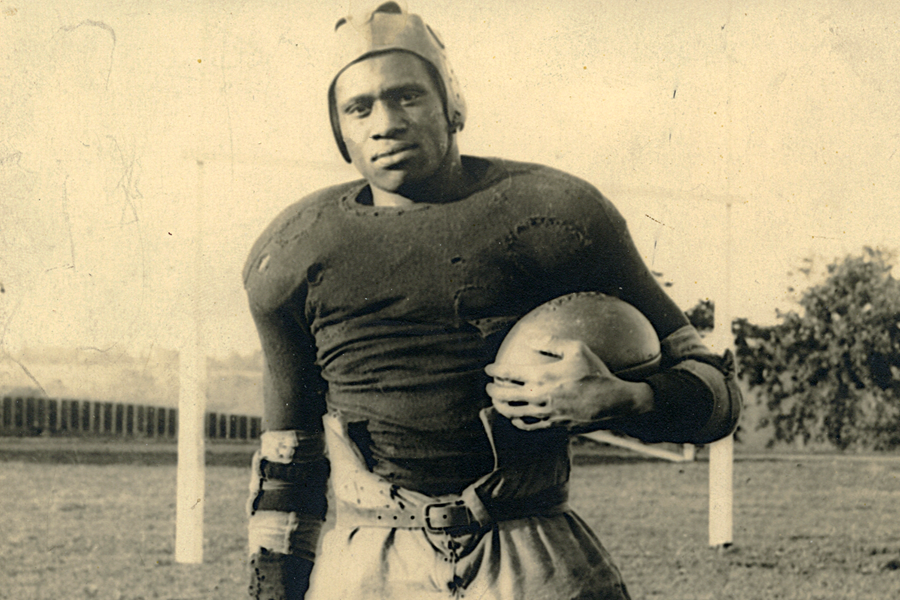 As a first-year student at Rutgers College during fall 1915, when Paul Robeson was the sole African-American student on campus and only the third to be enrolled in the 149-year-old school, he held a white classmate over his head in rage and thought he wanted to kill him. But he didn’t. After Rutgers’ football head coach George Foster “Sandy” Sanford shouted, “Robey, you’re on the varsity!” Robeson placed his new teammate – the one who’d just stomped on his hand in an attempt to break it – on the ground unharmed.

“He didn’t just accept abuse; he pushed back,” says Wayne Glasker, an associate professor who specializes in African-American and 20th-century U.S. history at Rutgers University-Camden. “And the team realized, ‘OK, he’s a rugged guy, the kind of person we need.’”

The team was right. With Robeson on the roster, Rutgers would have an incredible run from 1915 to 1919. “Robey,” as he was known across campus, was a two-time All-American and hailed as the game’s best ever. Although he also distinguished himself academically and in three other sports at Rutgers, Robeson’s gridiron experiences best demonstrate how his character matched his talents.

It was a rough start. Ten days before Robeson made the team, the 17-year-old had walked onto the Rutgers practice field, where he was assaulted by other players trying out for the team, breaking his nose and dislocating his shoulder. While recovering from his injuries, a shell-shocked Robeson questioned whether he should return.

Then he remembered what his father, a former slave who had become a pastor, had told him – that on the field, in the classroom or anywhere else, “I wasn’t just there on my own,” Robeson told a reporter in 1944. “I was the representative of a lot of Negro boys who wanted to play football and wanted to go to college, and, as their representative, I had to show that I could take whatever was handed out.” 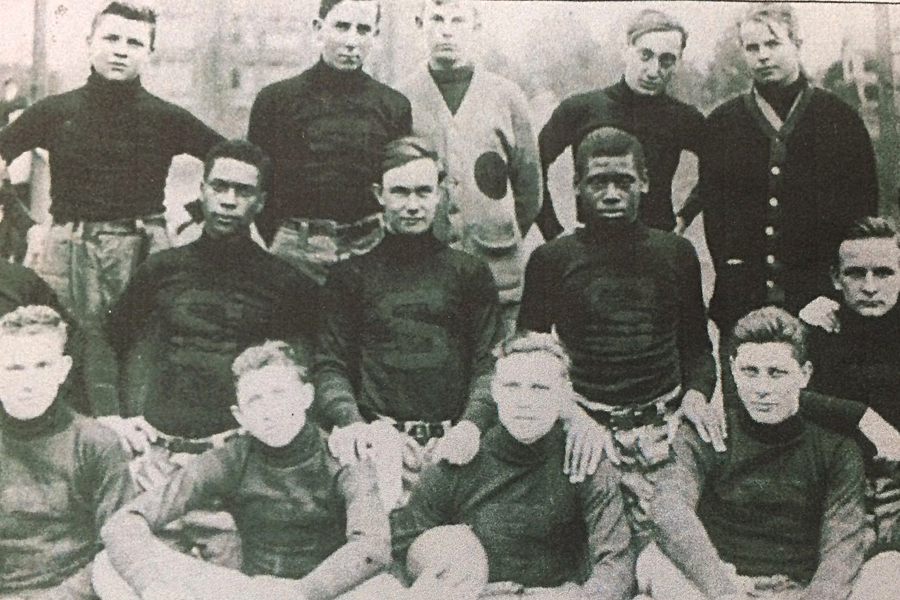 When Paul Robeson rose to speak at his 8th-grade graduation, he was ready.

A year earlier the 13-year-old had moved roughly 20 miles from Westfield to Somerville, New Jersey, with his father, William, the new pastor of the borough’s St. Thomas A.M.E. Zion Church. A former slave with two master’s degrees, William was also a first-class orator who had taught Paul how to speak publicly. And, indeed, two local newspapers would report that Paul wowed the audience.

He had also chosen a provocative speech to showcase his oratorical prowess – Patrick Henry’s famous 1775 call to arms, which ends with: “I know not what course others may take; but as for me, give me liberty or give me death!”

It was 1911. Paul had spent 10 years watching his father, a model of perseverance, regain his footing after losing a Presbyterian pastorship in Princeton. Now, it was Paul’s turn to become his own man.

“Everything for which he’d later be famous – singing, oratory, athletics, acting – the first time we have evidence of him doing it was in Somerville,” says Randall Westbrook, a 30-year resident of the borough and part-time lecturer in the Department of Africana Studies at Rutgers University-New Brunswick. “And that speech was a very interesting departure from what most people were used to.” 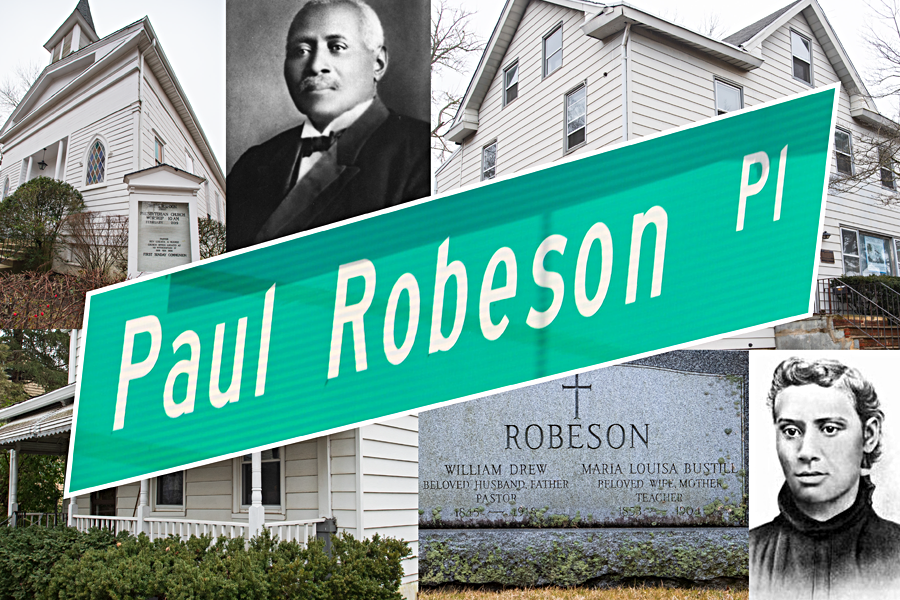 Ashes. That’s what Paul Robeson remembered. It was 1901. He was just 3, living in a shack in Princeton, New Jersey. His father, William, who owned a horse and wagon, would sometimes drive Princeton University students around town. But, mostly, he worked as an ashman, hauling ashes from people’s fireplaces and dumping them in the Robeson backyard.

“Not once did I hear him complain of the poverty and misfortune of those years,” Paul would later write in his 1958 autobiography, Here I Stand (Beacon Press, 1998).

A year prior, William had marked 20 years as pastor of the town’s all-black Witherspoon Street Presbyterian Church. But how he lost the job, and the subsequent trials he endured, profoundly influenced Paul for the rest of his life.

“He had tremendous respect for his father and his father’s perseverance,” says Edward Ramsamy, associate professor in and chair of the Department of Africana Studies at Rutgers University–New Brunswick. “And then there were the values Paul Robeson’s father instilled in him.”

Celebrating the Life of Paul Robeson 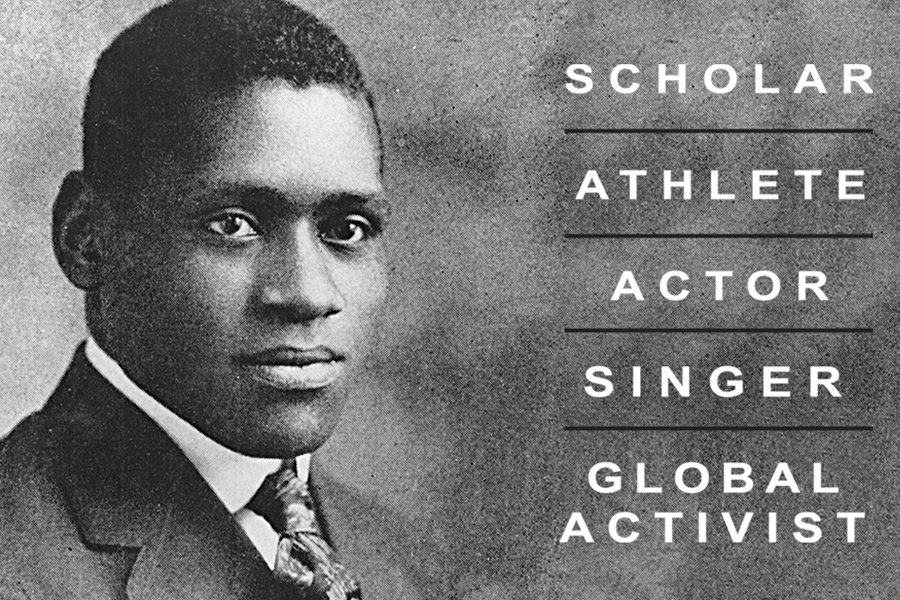 Rutgers is honoring Paul Robeson’s legacy as a scholar, athlete, actor, singer and global activist in a yearlong celebration to mark the 100th anniversary of his graduation. Check back with Rutgers Today throughout the year as we present a special series chronicling Robeson’s life and his influence on generations.

In June 1919, in his last public appearance at Rutgers College before graduating, Paul Robeson stood before the audience assembled at the Second Reformed Church in New Brunswick to deliver the farewell commencement address, which he had entitled “The New Idealism.” Standing at 6’3”, the 21-year-old opened his speech by thanking recent World War I veterans for forging a “new American spirit,” one in which people of all backgrounds could succeed, so long as they worked hard.

The “less favored race,” however, couldn’t do it alone, Robeson added, speaking in the bass-baritone that would become world famous. He appealed to the more privileged to help “relieve the manifest distress of your fellows” so as to realize the primary “task of civilization – the achievement of happiness and the institution of community spirit.”

Spoken decades before the civil rights movement, by only the third African American ever to attend Rutgers, which had recently celebrated its 150th anniversary, Robeson’s words may have seemed naïve.

But his optimism had been buoyed by his experience at Rutgers where he thrived, despite facing overt and subtle racism, as student and athlete, relying, in no small part, on his exceptional charisma.