Food for Thought: The Symbolism Behind Asian Food 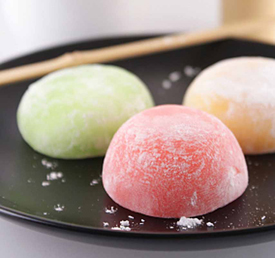 The symbolism of rice cakes, like these treats from Japan, can vary from culture to culture.

Amy Tran knows that sometimes, a dumpling is not just a dumpling. When it’s eaten during the Chinese New Year, it’s a symbol of good luck.

“In Asia, there are a lot of wishes and thoughts conveyed through food,’’ says Tran, a Rutgers senior whose parents are from Vietnam and whose father is half-Chinese and half-Vietnamese. “Food has a basic meaning, but there’s also an underlying message.’’

For the past several months, Tran has interviewed more than 600 Asian students and others to see if they know the meaning behind various dishes in China, Vietnam, Korea, and Japan. The research is part of her honors interdisciplinary thesis in Asian-American and Communications studies.

What she’s found is that the longer their families have been in the United States and the higher their acculturation level, the less likely they are to know why red dates are served at Korean weddings (they represent fertility), or why apples are served on New Year’s Day in China (they symbolize peace). She also discovered that many older Asian Americans know the myths and metaphors associated with their national cuisine. But those under 30? Not so much.

To get the most comprehensive results, however, Tran needs to survey more Japanese-Americans. Although there are many on the West Coast, there are relatively few in the New Jersey Area and she wants to test their knowledge. The deadline for her paper is Friday, and she’s putting out a call for volunteers.

Tran, who majors in cell biology and neuroscience, chose the topic not only because she loves to eat, but because she thinks food can bridge language barriers and generational gaps among Asian-Americans – from recently arrived immigrants to second and third-generation citizens.

“It can help them communicate, especially with their grandparents,’’ says Tran, who grew up in East Brunswick.  “If you’re with people and you can’t speak the language, at least you can eat with them.”

According to Tran, a former vice-president of the Rutgers Vietnamese Student Association, food holds an important place in Asian culture. “Most people here will ask ‘how are you’ when they see you,’’ she says. “But Asians will ask, “Have you eaten yet?’’
During her research, Tran learned that the same dish – a rice cake, for instance – can have widely different meanings, depending on the culture and the way it’s prepared.   In China, rice cakes served on New Year's day mean that each year, you are getting bigger and better. In Korea, the cakes are served in soups and sometimes formed into a half-moon shape. According to Tran, the shape symbolizes that people are a work in progress, “there is always room for improvement.” Koreans also have different fillings for the cakes which carry different meanings, depending on the occasion.

Since Tran started the project, she has surveyed friends at Rutgers, posted the survey on Facebook, and brought it to Asian community groups in New York, New Jersey and Pennsylvania.

At the end of the survey, Tran added a comment box, which drew some embarrassed responses from those who scored low. “Some of them said, “I feel so uncultured,’” Tran says with sympathetic chuckle.

Although she’ll always be curious about food, she’s planning a career that has nothing to do with eating – at least not directly. She wants to be a dentist.

“I think learning about all of this will help me, though,’’ she says. “In every profession, you need to work with different people. And food is a good way to get to learn about them.”