Dating in the Age of the Pandemic 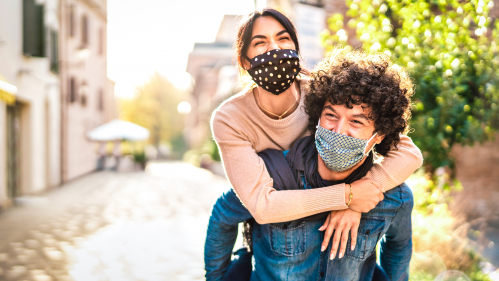 The pandemic population of singles are looking past small talk and want to find someone to lockdown with in their personal lives.
Shutterstock

In the time of COVID-19, when intimate relationships have been strained and human connections fleeting, singles are kissing hookups goodbye in favor of settling down – and getting vaccinated at a higher rate to make it happen.

“I’ve been doing this for 40 years and have never used the word historic before,” said Helen Fisher, chief scientific adviser to the dating site Match.com and a member of the Center for Human Evolution Studies in the Department of Anthropology in the School of Arts and Sciences at Rutgers University-New Brunswick. “But now I’m saying that we are seeing historic turnarounds with singles. They are looking for committed relationships.”

In her role at Match, Fisher conducts an annual survey of 5,000 singles across the country to gauge trends and behavior patterns among U.S. singles ages 18 to 21. She has surveyed 55,000 non-Match members since she began tallying these responses more than a decade ago. The goal is to determine what is changing and how dating is evolving.

While sexual attraction is still important, Fisher said those surveyed in 2021 rated emotional maturity, more than even honesty and communications, number one when it comes to selecting a partner.

This pandemic population of singles is looking past small talk and wants to find someone to lockdown with in their personal lives, she said. An even higher number, 70 percent, of men said they wanted a relationship in the next year compared to the 60 percent of women who called it a priority – not a surprise to Fisher who said men fall in love faster.

In pre-pandemic 2019, Fisher said 58 percent of those surveyed were looking for a partner and committed relationship compared to 76 percent in 2021.

“I call it post-traumatic growth,” said Fisher, who has done extensive research on brain chemistry and romantic love. “Especially the college students, Gen Z and Millennials who have faced a lot of hardship during this pandemic. They are growing up, know what they want and leading the way.”

These singles said they want to find someone with an annual income that matches what they earn. Gone are the days, Fisher said, when a woman with a higher salary could quash men’s egos.

“They want their partner to have a similar level of education and successful career,” said Fisher. “It’s not the job but rather the career path.”

Video dating – especially first dates – has also become more common during the pandemic. Meeting for the first time on a platform like Zoom had already been increasing over the past decade, with 19 percent of those surveyed meeting for an online date before connecting in person prior to the pandemic. Since 2020, these interactions increased to 27 percent with more than 50 percent of Gen Z and Millennials video chatting before the first date.

“What they reported about these video dates is that they had more meaningful conversations, more honesty and more self disclosure,” Fisher said. “Money and who is paying for the date and what to expect in regard to sex are off the table.”

“These video chats will continue post-pandemic,” Fisher said. “These first dates are much more relaxed and by the end of a video date they know whether they want to take it to the next level.”

That is if the person on the other end is vaccinated. Fisher thinks these post-pandemic singles are vaccinated at a higher rate because they are serious and want stability in their lives and others to know that they are being safe not only for themselves but also for their neighbors and society.

“They are looking for someone they could start a life with together,” said Fisher. “They are going after life’s greatest prize, a mate, and they want to make sure they get it right."