By the time he turned 65, an ailing Paul Robeson felt both unappreciated for and unsatisfied with all that he had achieved. Martin Duberman, author of the biography Paul Robeson, writes that since childhood the actor, singer and social activist had struggled to live up to the dictum preached by his father, “that he should always do better and more.”

In one sense, Robeson, who graduated from Rutgers College in 1919, had good reason to despair. For two decades, he grappled with claims that he was a communist sympathizer. Between 1950 and 1958, the U.S. State Department revoked his passport, stating that his travels abroad would be “contrary to the best interests of the United States.”

But what Robeson didn’t realize in his later years was that a reassessment of his extraordinary accomplishments, including pioneering civil rights efforts, was underway. “He pushed himself in a wide array of directions,” says John Keene, professor and chair of the Department of African-American and African Studies at Rutgers University–Newark. “His virtuosity is still there for us to see—his speeches, performances, published works. But there is also a real daring, a boldness, not to take the easy road.” 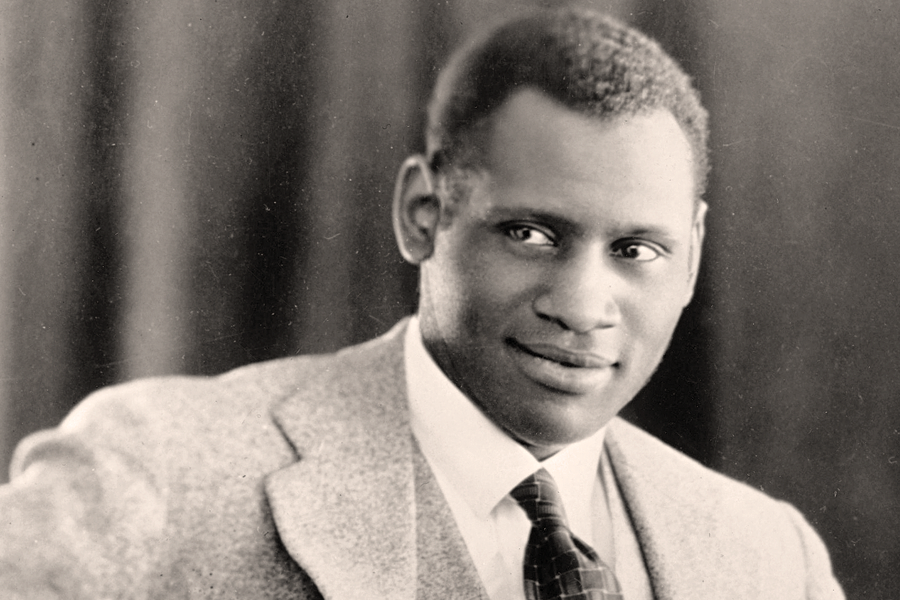 As Duberman notes, Robeson’s journey began with his father, William, a former slave turned pastor who led African-American churches in New Jersey while raising five children. Paul wrote of his father in his 1958 memoir, Here I Stand, that success wasn’t measured “in terms of money and personal advancement, but rather the goal must be the richest and highest development of one’s own potential.”

With that in mind, Paul entered Rutgers in 1915 and proceeded to excel at academics, extracurriculars and sports, earning multiple varsity letters and becoming the university’s first All-American football player. “Rutgers allowed his multifaceted skills to develop—his athletic skills, his oratory skills and his intellectual interests,” says Edward Ramsamy, associate professor and chair of the Department of Africana Studies at Rutgers University–New Brunswick.

But it wasn’t until after he ditched a legal career for one in the arts that Robeson’s worldview matured. From the mid-1920s through the 1930s, as a singer and actor, he traveled the globe and met with activists, political leaders and members of the working class who fueled his advocacy for social causes. He raised funds for Welsh miners, stumped for African and Asian anticolonialists and lobbied in the United States for a federal antilynching law as well as for the integration of professional baseball.

“He was an ambassador for the United States,” says Andrew Flack, a playwright who co-created I Go On Singing, a musical account of Robeson’s life. “He was respected around the world. He was an exemplar of what America was going to be about—brotherhood, kindness, intelligence and freedom of movement.”

He was also an ardent believer in socialist principles who before World War II divided the world into two camps: fascists and antifascists. Among the latter, he included the Soviet Union, where, he wrote in Here I Stand, “colored people walked secure and free as equals.” Such sentiments, coupled with critiques of the U.S. government, drew the FBI’s attention and the ire of the House Un-American Activities Committee.

Robeson’s views, says Keene, were “problematic for the powers that be in the United States—a country steeped in the rhetoric of individualism, liberty and freedom, but very skeptical of people who espoused views that might have been informed by Marxism in battling fascist forces. He made a conscious choice about which side he was going to be on.”

Consequently, Robeson was considered damaged goods during the Cold War by old allies, such as the NAACP, and up-and-coming civil rights leaders who avoided associating with him. Ironically, Here I Stand eloquently argues many of their positions while pushing for unity among black organizations, using the mid-1950s bus boycott sparked by Rosa Parks as an example. It proved, he wrote, “that the various existing organizations of the Negro community can be effectively united for a common purpose.”

In the early 1960s, Robeson stopped performing and over the next decade suffered from declining health. In 1966, after losing his wife, Eslanda, to cancer, he moved into his sister’s Philadelphia home and lived as a recluse. Already, however, fellow African-American artists, such as Sidney Poitier and Harry Belafonte, were crediting Robeson with paving the way for their careers. And reporters for Sports Illustrated and Ebony magazines wrote glowingly of his pioneering achievements in the arts, athletics and activism. Educational institutions, including Rutgers, began to name facilities and programs after him.

After Robeson died, on January 23, 1976, at age 77, thousands of people attended his funeral in Harlem. Since then, books, films and articles have acknowledged his invaluable contributions.

“He is one of Rutgers’ brightest lights,” says Keene. “And I hope none of us, at Rutgers or anywhere else, ever forgets the amazing work he did.”