Connecting the Dots Between Car Crashes and Systemic Transportation Challenges 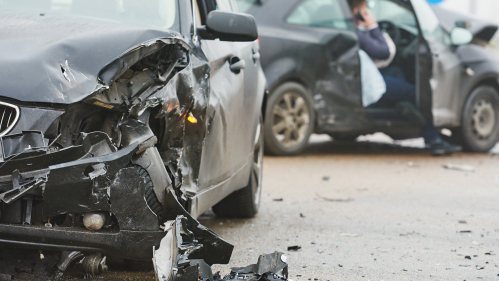 To most of us, the twisted metal and broken glass of a car crash is evidence of driver error, bad luck or both. To Kelcie Ralph, an associate professor of urban planning and policy development at Rutgers, every car crash is a datapoint in the larger story of America’s poorly designed roads.

Many car crashes in the United States can be attributed to infrastructure problems or excessive speeds, Ralph said. Pedestrian deaths, which are at their highest level in nearly 30 years, are even more predictable, typically occurring at high-volume “hotspots” where pedestrians must cross five or more lanes of traffic.

To bring focus to these narratives and provide a more comprehensive picture of road safety, Ralph is working with police in New Jersey to shift how the media covers crashes involving cars and pedestrians.

Previously, Ralph and colleagues worked with journalists to improve media coverage of crashes. In this research, they went to the source – the police who write the press releases and social media posts that journalists rely on. Their study was published in the journal Transportation Research Interdisciplinary Perspectives.

As part of this work, they created a training program and piloted it with 45 police officers at the New Jersey Police Executive Institute in Marlton. According to Smart Growth America, in New Jersey approximately 560 people die in traffic crashes every year, with 175 of those deaths being pedestrians. The sample of police was reflective of national law enforcement in that it included officers from large and small jurisdictions.

Among the initial recommendations was to use language that avoids victim-blaming and to refer to a “driver” rather than a “car” in crashes with a pedestrian. Another suggestion: connect the dots between crashes and transportation issues by including crash statistics and emphasizing how vehicle speeds, traffic volumes and roadway designs contribute to crashes.

After the program was piloted in October 2021, the researchers conducted follow-up interviews with police, journalists and legal scholars to determine the likelihood of police departments implementing the advice.

During post-training discussions, many police said that when a crash happens, they don’t have time to look up the latest trends in road safety or wordsmith every sentence. Others worried that offering details beyond the facts would open departments up to legal trouble.

Based on this feedback, the researchers refined their guidance and produced a press release template that can be completed quickly and customized as needed. Future work will measure the uptake of these guidelines and impact on media coverage.

“In the U.S., we have consistently prioritized high-speed, high-flow roadways, but that comes with consequences,” said Ralph. “Current road systems make crashes inevitable. Our research, and this project, is meant to refocus public attention on solutions.”