It’s strong enough to carry automobiles, trucks, and even freight trains. Now, a Rutgers-developed “lumber” made from recycled plastic is bearing its toughest load ever – a 70-ton Army tank.

The challenge arose when the U.S. Army decided to replace a dilapidated, wooden bridge along a dirt road used for military training exercises at Fort Bragg in North Carolina. Concrete or steel construction at the remote site would have been expensive and time-consuming. A replacement wood bridge would require environmentally harmful preservatives to fight rot and insect damage, and even then would be subject to costly routine maintenance and repair. 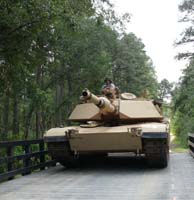 Army engineers, working with Rutgers and manufacturing licensee Axion International, proposed a bridge made of plastic to Fort Bragg’s brass, but there was skepticism in the ranks. The plastic material had proven itself in bridges that carried automobiles and trucks, and in railroad ties that supported subway cars and freight trains.

But what about a load as concentrated and punishing as an M1 Abrams tank?

“It hadn’t been done before,” said Tom Nosker, principal investigator with Rutgers’ Advanced Polymer Center, affiliated with the university’s Department of Materials Science and Engineering.

Nosker worked closely with Richard Lampo, a materials engineer in the U.S. Army Corps of Engineers, who made the winning case for plastic lumber’s strength, durability and ease of construction. The Fort Bragg Directorate of Public Works replaced the old wooden bridge with its first plastic bridge earlier this year and tested it on June 11.

“Just in case, the Army sent its tank extrication equipment to the site for the first crossing,” said Nosker, who felt a little miffed but mostly amused. 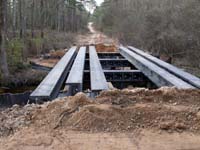 Engineers outfitted that bridge with strain and deflection gauges to detect how the bridge would hold up to the massive load.

“The instruments showed the bridge performing to specifications, flexing as designed under the massive load, and returning to its original position after the tank had crossed,” he said.

Fort Bragg officials, confident in the structure, built a second bridge and ordered a third. Proud that they had a winner on their hands, they invited Army brass and outside guests to a demonstration of the first bridge on Sept. 18.

The achievement involved both plastic formulations and structural engineering design. The plastic is made by combining polystyrene and high-density polyethylene with fibers and nanoparticles to achieve structural strength, Nosker explained. The tank bridge lumber was made primarily from recycled plastic milk and laundry detergent bottles and automobile bumpers.

The structural components manufactured by Axion included 12-inch diameter pilings and I-beams made by bolting two T-beams together. Nosker said it would be difficult to cast an I-beam in one piece because of the way hot thermoplastic contracts upon cooling while still locked in a mold. The T-beam design proved feasible and structurally sound.

With this latest accomplishment, Rutgers and Axion foresee more business opportunities for a technology that helps save the environment while renewing the country’s transportation infrastructure.