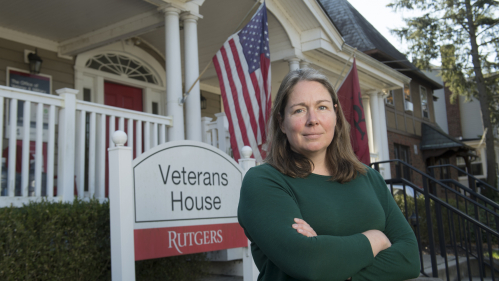 Since joining Rutgers in 2015, Ann Treadaway has been the university’s primary advocate for student veterans, working specifically with the population at Rutgers-New Brunswick and supporting the offices that work with military affiliated students at Rutgers-Camden, Rutgers-Newark and Rutgers Biomedical and Health Sciences.
Nick Romanenko/Rutgers University

Director of the Office of Veteran and Military Programs and Services opens up about how service changed her and impacts the lives of our 2,000 military affiliated students

Ann Treadaway, director of Rutgers’ Office of Veteran and Military Programs and Services, wasn’t chasing glory when she joined the Army Reserves in 2001, just a few months before the Sept. 11 terrorist attacks.

She just knew that college wasn’t clicking for her, and the recruitment office was conveniently located across the street from where she’d been bartending to pay for tuition. If the military was a good fit for so many of the men in her family who served, she figured maybe it would suit her as well.

Two tours in Iraq later, Treadaway returned as a changed person ready to finish her degree.

“Before I left, I had a 1.7 GPA. When I got out of the military I was a great student. I had no trouble getting up for 8 a.m. classes anymore,” said Treadaway, who made the dean’s list every semester but one while double majoring in history and political science at the State University of New York, Purchase College, and earned her master’s degree in American history from the College of Staten Island, City University of New York. “I was 26 and in classes with 20-year-olds. I had a world of experience that they couldn’t relate to.”

Rutgers’ 2,000 military affiliated students bring a similar sense of discipline and worldliness with them to the classroom every day, said Treadaway, who added that the university tripled its veteran student population after passage of the Post-9/11 Veterans Educational Assistance Act in 2008.

“How many people can say they have worked with someone from every state in the U.S. or knows someone from the Navajo Nation?” she said of a veteran’s unique ability to find common ground with people from all backgrounds. “I think we don’t know each other anymore. Service allows you that and the ability to put something above yourself.”

Since joining Rutgers in 2015, Treadaway has been the university’s primary advocate for student veterans, working specifically with the population at Rutgers-New Brunswick and supporting the offices that work with military affiliated students at Rutgers-Camden, Rutgers-Newark and Rutgers Biomedical and Health Sciences. Her mission is to connect this population with the benefits and resources they’ve earned through their service and ensuring university policies, programs and activities enhance educational experiences.

“We are not a one-stop shop, we are a first-stop shop,” she said of her office, which also encourages veterans to take advantage of traditional student services and activities. “A lot of programs try to address all of a military affiliated student’s needs in one spot. While it’s convenient, being only around other veterans isn’t helpful for their transition.”

Her work has not gone unnoticed. This year Military Times ranked Rutgers University fourth in the nation and first in the Mid-Atlantic Region as a “Best for Vets” college. The university has consistently landed in the top 15 of that ranking since 2013. 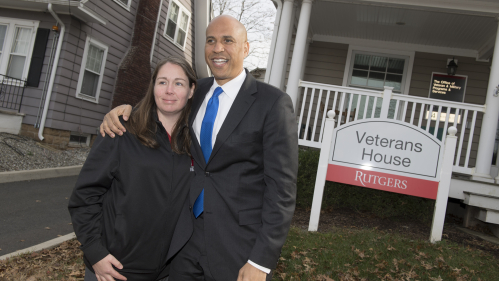 Director of Veteran and Military Programs and Services Ann Treadaway and Senator Cory Booker, D-N.J., meet with student and alumni veterans in honor of Veterans Day in 2018.
Nick Romanenko/Rutgers University

Still, identifying military affiliated students, faculty and staff isn’t always easy, she said. Misperceptions keep some who’ve served from disclosing their veteran status. She attributes that disconnect to the significant decline in military service among Americans – from 9 percent of the population during WWII to half of a percent during the wars in Afghanistan and Iraq. That’s why Treadaway is also committed to educating Rutgers’ faculty, staff and student body about the realities of military life and challenges of acclimating to campus.

“If you’re not related to someone in the military and you didn’t serve, where do you get your understanding of the military?” said the Rockland County, N.Y., resident. “Whether it’s through movies, news or video games, media portrayals are often over sensationalized – you’re either a hero or broken.”

The former carpentry masonry specialist with the Army Corp of Engineers considers herself neither.

Two days before Treadaway was set to graduate from basic training, her drill sergeants rushed her company to the barracks and rolled out a TV just as the first of the twin towers fell on Sept. 11. When she’d enlisted as a Reservist several months earlier, it was during an extended peacetime. After basic training, she expected to drill one weekend a month and two weeks each summer.

“This is what you’re going to be doing now,” she said a drill sergeant told them, pointing to the TV before asking each soldier in the room which specific training awaited them after graduation. When Treadaway replied "carpentry masonry," she was told: “You’re going to be making caskets.”

After a little more than a year in the Army Reserves, Treadaway volunteered for active duty, based out of Germany in 2003. Upon her arrival she was informed that the company she was assigned to had just left for Iraq and she would be joining them within a month. Though she never had to fire her rifle or construct caskets, Treadaway performed repairs to different facilities housing service members, clerical duties as a supply sergeant during her first tour and drove a double wide 5-ton truck in convoys from Kuwait to Mosul on her second. Those experiences made her the first in her family to have “boots on the ground” in a military operation after having two grandfathers, her father, an uncle and a brother serve in various branches of the military outside of war zones.

“I can’t kill anyone with my bare hands, and I’ve never fired my weapon at anyone during the two times I was in Iraq,” she said. “I was there to rebuild. Everyone’s role in the military is different. All our experiences while deployed are different. Sometimes that is hard for our veteran students to explain.”

While studying for her master's at CUNY Staten Island and preparing for life as a history professor, she was recruited to work in the school's Vet Center as a student employee, eventually going on to become the office’s director after graduating. Today the married mother of twin 5-year-old boys is working on her doctoral degree in higher education, researching military cultural competency.

Since the United States’ recent withdrawal from Afghanistan, Treadaway is readying for an influx of veterans and dependents eligible for their parent's or spouse’s education benefits as more dependents come of college age and more service members either return home or return to their educational pursuits now that they are less likely to be interrupted by deployments.