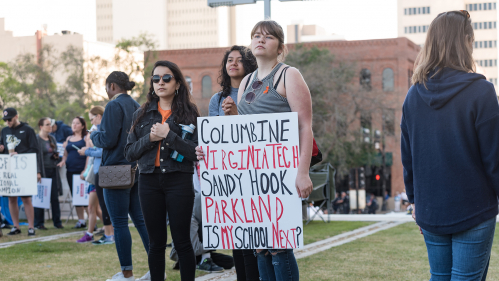 Michael Anestis, executive director of the New Jersey Gun Violence Research Center, talks about the role research can play to try to find a solution and stem the tide of gun deaths in the United States.
Shutterstock

Yesterday’s school shooting in Uvalde, Texas, which claimed the lives of 19 schoolchildren and two teachers – less than two weeks after 10 people were killed in a Buffalo grocery store – reignited debate over how to address the never-ending cycle of gun violence in the country.

Michael Anestis, an associate professor at Rutgers School of Public Health and executive director of the New Jersey Gun Violence Research Center, talks about the role research can play to stem the tide of gun deaths in the United States.

For more than 20 years, there was a freeze on federal funding for gun violence research and prevention. Do you believe there is a correlation between the ban on federal funding and the rise in mass shootings since the Columbine High School massacre in 1999?

The decades-long freeze in federal funding for gun violence research undoubtedly set us back in our ability to understand and prevent all forms of gun violence, including mass shootings. The fact that this funding freeze has been followed by an unprecedented surge in firearm sales in recent years has left us in a position where we have immense amounts of ground to make up. Without question, we have made progress and many scientists have helped us to be better positioned to address the issue, but there is simply no question that our failure to fund research in this area caused substantial damage.

Federal funding was finally reinstated in the 2020 federal budget, but what was lost in the two decades funding wasn’t available, and can we recover?

When innovation is prevented from even happening, there is no way for us to even know what was lost. We did not have the opportunity to make surprising discoveries that would have flowed from a steady and proportionate investment in gun violence prevention research. And during all of that time, the total loss of life to gun violence was staggering. That being said, I absolutely believe that we can recover. The will to solve this problem within the scientific community and in the general public is immense. With proper funding, we can do so much and, with enough momentum, we can make meaningful progress.

There was a school resource officer present in Uvalde and at other school shootings, but they weren’t able to stop the gunmen. Is there research that shows there is value in having a police officer in schools or should there be another approach?

I would not discount the value a school resource officer can provide in a lot of areas, but the evidence does not support that having armed guards prevents mass shootings. In Uvalde, in the Dayton, Ohio, shooting in 2019 and in several other similar situations, heroic armed guards were present, and the shootings still took place. Our solutions need to involve better detecting and addressing risk for violence while kids are still in school, working to limit access to firearms that can fire ammunition at a rapid rate from a high capacity magazine, and encouraging safe storage – and storage away from homes when somebody at home is in distress – of firearms. We need policies like extreme risk protection orders that can equip a community to reduce risk when they recognize that an individual is an imminent threat to themselves or others.

Universal background checks, particularly when paired with a licensing system, have been shown to be a useful tool in the effort to prevent gun violence. Extreme risk protection orders and mandatory waiting periods have also shown promise, along with child access prevention laws and other laws that address safe firearm storage. No single form of legislation can eliminate risk, but each of these laws addresses different communities of individuals at different points in time, ranging from the point of purchase to the days preceding an attack. Importantly, none of these policies specifically implicate individuals with mental illness, as mental illness has not been shown to be a primary driver of gun violence and policies that only address those with mental illnesses have been shown to be less effective than population-level approaches.