Abortion’s Impact on the Midterm Elections 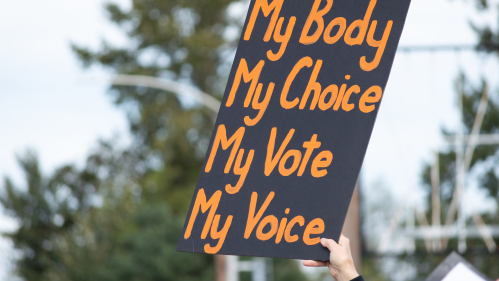 With less than three weeks from the final ballots being cast in the 2022 midterm elections, Rutgers experts weigh in on how abortion will be a factor with voters.

There is plenty of evidence that suggests that the U.S. Supreme Court’s decision to overturn Roe v Wade – which returned decisions about abortion to the states – is going to drive voter behavior in this year’s mid-term elections. For example, voter registration among women has increased substantially in several states, most notably Pennsylvania and Kansas.

Additional issues related to sexual and reproductive health are also being vigorously debated in communities and candidates are increasingly being confronted about their positions. These include sex education, discussing sexual orientation and gender identity in schools and banning books. In general, conservative voters have been more mobilized by school-related topics but access to abortion, in particular, seems to favor candidates who support reproductive rights.

Heading into the election, it is critically important to implement strategies for ensuring that people’s intentions to vote translate into actual election participation, such as ensuring that people make a concrete plan to vote, identify any barriers and then problem solve to overcome those barriers. While these individual level interventions can’t overcome the structural challenges that make voting difficult in some states, using behavioral science in get out the vote efforts can make a difference.

It’s been more than four decades since women first outvoted men. They’ve never gone back. In fact, the gap in voter registration and turnout has only grown in the intervening years. This year, women have been thrust into a new, old world, thanks to the Supreme Court decision in Dobbs v. Jackson Women's Health Organization, and the question on everyone’s mind is “How will this impact the upcoming midterm elections?” It’s impossible to say for sure. Women are not monolithic: partisanship is a better predictor of opinions on reproductive healthcare access than gender…but gender has implications for partisan status. Besides these quantifiable concepts of party identification, voter registration and turnout, however, is the more nebulous question about motivation.

Elections are all about turnout and who turns out are those with the most at stake. American women went to bed one day in a reality they thought they knew, that offered certain forms of security to them. They woke up in a new reality. One where the security they knew had been stripped away. Their health, their economic possibilities, the horizons of their fulfillment, their very lives were imperiled in ways that they had thought were impossible. The Dobbs decision makes clear that elections have consequences. Now we will wait to see how women respond.

The U.S. Supreme Court’s decision to overturn Roe v. Wade and end nearly 50 years of constitutional protections for abortion rights is a shattering blow. It’s hard to overstate the meaning of rolling back such a well-established right. Today, people have fewer rights over their bodies than their mothers and grandmothers, and their rights are limited by where they live.

Despite the Court’s decision, most Americans support the right to abortion. Midterm elections are an opportunity to express this support and to demand action from our political leaders. Although the Court described its Dobbs decision as shifting abortion decisions to the states, there is momentum to try to pass a national ban. Voting for who represents you within your state’s legislative bodies and who represents your state in Washington, D.C. are means to influence these changes. Voters also need to consider that those seeking to ban abortion do not want to stop at this one procedure; access to contraception, infertility treatments, HIV prevention and gender-affirming care are also at risk. Voting is a tool to stop our nation’s retreat from supporting people’s right to reproductive and bodily autonomy – the right to control if and when to have children and to make decisions about their bodies.

Reproductive access, choice and justice will bring voters to the polls throughout the nation as horror stories from states where abortion is prohibited bring home the truth that until reproductive rights are protected, the health of birthing people is truly at risk.

Specifically, abortion rights will be at the core of many campaigns, as I would argue it should have been before now. If legislators had focused on codifying and protecting the right to abortion in state constitutions over the past few decades, we wouldn’t be where we are now. Given that Roe v. Wade was argued on the right to privacy, there have long been threats to dismantle its foundations. Now is the time for voters to support candidates who will truly do the work, beyond performative measures, to support abortion access in New Jersey and throughout the U.S.

The Dobbs decision makes clear that elections have consequences. Now we will wait to see how women respond.

The upcoming elections represent an important inflection point in history, especially for women's health. This year's midterm elections offer a vital opportunity for women of all ages to ensure their voices are represented by our elected officials.

As a maternal-fetal medicine physician, I have dedicated my life’s work to providing safe care in a welcoming and inclusive environment for pregnant women facing complex medical conditions. It is unprecedented that many in my profession are no longer able to provide medically sound obstetrical care, even for emergency interventions, and it is important that we use our voices through our votes to prioritize the safety of our patients’ lives.

Participation in the election process is an essential tool in representation. As a community, I encourage women to join together and strengthen our representation. Equitable access to reproductive health care, including abortion, is a fundamental right for all across the country and especially important in the protection of women’s rights to make decisions about our own health care. Everyone who is able to vote should be intentional in the choices made at the ballot to ensure the decisions about our health and the health of our loved ones are protected.

The Dobbs decision isn’t only an attack on the self-determination of women, harming their ability to become equal citizens. It illustrates a lack of compassion for women’s ability to control their lives and a total disregard for women’s health. If we are to protect women’s health and lives, we have to make sure to elect representatives who will vote to keep abortion legal.

The decision threatens women’s reproductive and general health. Since June, half of the nation’s states have already severely restricted patients from accessing abortion services or are expected to do so soon.  Many of the laws include language that prohibits prescribing and dispensing an “abortion-inducing drug,” or other similar terms. The wording is so vague as to leave it unclear whether the laws prohibit dispensing the medications only when the purpose is to induce abortion or whether the medication is entirely prohibited. Patients with pregnancy complications or preexisting medical conditions that may be exacerbated by pregnancy are being forced to delay an abortion until their conditions become life-threatening and qualify as medical emergencies. Women suffering from conditions in which treatments can harm a developing fetus, such as certain forms of rheumatism and cancer, already find it difficult to be treated.  In Texas, oncologists say they now wait for pregnant women with cancer to get sicker before they treat them because the standard of care would be to abort the fetus rather than allow treatments that damage it. But a state law allows abortion only “at risk of death.”