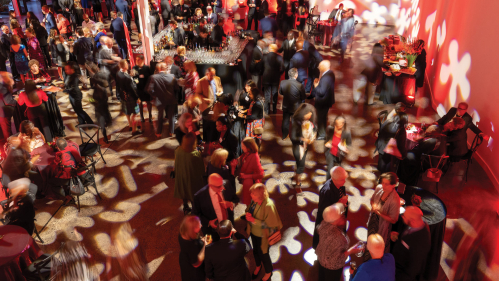 The gala honoring the four inductees into the Rutgers Hall of Distinguished Alumni took place at Grounds for Sculpture in Hamilton, New Jersey, in November.
Photography by John O’Boyle

Grace Under Pressure
With decades of experience in health care, New Jersey health commissioner Judith Persichilli was the right person to guide residents through a once-in-a-lifetime public health crisis.

As the world entered the darkness of the COVID-19 pandemic in 2020, Judith Persichilli, health commissioner of New Jersey, brought the light of hope to the people of the state. Standing alongside Governor Phil Murphy at televised briefings, she became the “woman who needs no introduction,” calmly recounting the staggering numbers of new cases and deaths and  reiterating safety precautions. Her resolve set the tone for the tens of thousands of health care workers on the front lines of the crisis.

Persichilli NUR’76 had been on the job four months when her office started hearing about a viral outbreak in China. “By March, we had the biggest surge of cases in our hospitals and infections in our long-term care facilities that we’d ever experienced,” Persichilli says. She worked tirelessly to develop strategies for mitigating the risks of COVID. “I came to work every day and said, ‘What have I learned over time in my education and my practice that’s going to help me through this?’”

Persichilli had a wealth of experience, having started nursing school at age 17, shortly after graduating from high school. She worked as an intensive care nurse for five years before earning a bachelor’s degree from the Rutgers School of Nursing and an administration master’s from Rider University—earning summa cum laude honors. “The first thing I learned at Rutgers is that nursing is more than a practice; it’s a profession that you always carry with you,” Persichilli says. “Whether you’re a school nurse, an acute care nurse, or long-term care nurse, you always enter your day thinking of how to make things better for the people you serve.”

As her career took her into hospital administration, Persichilli still saw herself as a nurse first. She became CEO of St. Francis Medical Center in Trenton and began leading larger hospital systems, the first woman and the first nurse in positions dominated by male executives. “The challenge was not in running the hospital or dealing with the clinicians, the physicians, the nurses, and the technicians,” Persichilli says. “The challenge was always in the boardroom because boards were still primarily male. I had to work hard to be heard, even as the CEO.”

Now, decades after her career began, Persichilli has the attention of a public health system that includes more than 100 hospitals. More than 2.3 million COVID-19 cases later, her resolve to finish what she started keeps her coming to work in a building that now bears her name. “Look, solving big problems is hard, but that’s the kind of risk I had to learn to take,” she says. “If you want the top job, it takes thick skin and broad shoulders. You have to just woman up and walk in.”
—Sean Downey

Out of This World
From his remarkable career in the aerospace industry to his ongoing work helping Rutgers students succeed, Kenneth Johnson lives life on a unique trajectory.

If you ask Kenneth Johnson which of his achievements he is most proud of, it is natural to expect an out-of-this-world answer. After all, Johnson ENG’66 spent 35 years creating spacecraft that have transformed our understanding of planet Earth and the solar system. Although he does express pride in every one of those satellite missions, he also takes great satisfaction in a different part of his life’s journey. This one is rooted on solid ground and still going at full power.

“I consider supporting Rutgers to be my second career,” says Johnson, who retired from Lockheed Martin in 2001 and has since devoted himself to a wide range of university endeavors. From serving on the Board of Trustees and Rutgers University Foundation Board of Directors to mentoring, networking with, and establishing a scholarship for talented engineers-in-training, Johnson has found many ways to stay connected to his alma mater. Doing so, in his words, “recharges my batteries like you wouldn’t believe.”

As a teenager in Metuchen, New Jersey, Johnson seemed focused on a career in automotive technology. But Rutgers School of Engineering changed his trajectory. An internship at Lockheed Electronics during his senior year immersed him in designing satellite tape recorders—and the allure of sending his work into orbit proved irresistible.

Shortly after graduating, he joined the RCA AstroSpace Center in East Windsor, New Jersey, as an associate engineer in the Spacecraft Design Department. Progressing through the management ranks as RCA became part of General Electric and eventually Lockheed Martin, Johnson led design teams that produced a new generation of weather satellites, helped create modern global communications and GPS systems, and played a major role in science programs. He is especially proud to have managed a group of young engineers who became known as “Kenny’s Kids” and proved essential in developing Terra satellites.

In that same spirit, Johnson is active in mentoring emerging STEM professionals at Rutgers, organizing meet-and-greets with business executives and advising young graduates as they navigate the working world. He and his wife, Jacqueline, have given back to the university in significant ways, including a major endowed academic scholarship for aerospace engineering students and championing and creating an endowment for the Scarlet Promise Grant program. “I love to talk to students about themselves, about their careers, about their desires,” Johnson says. Is there anything he tries to steer them away from? “Yes,” he answers. “The words, ‘It can’t be done.’”
—Scott Fogdall

A Lifetime of Having an Impact
Rutgers, Newark, and New Jersey are changed places—thanks to Richard W. Roper, who grew up in the segregated South and held prominent positions in both the private and public sectors.

Richard W. Roper wanted everyone to know he earned his degree from Rutgers University–Newark. “I got a class ring—one of those big things that took up a third of your finger,” says Roper NCAS’68. “I wanted people to see it when I was on the bus going home after I graduated.”

Those proud feelings for Rutgers have persisted for more than half a century. His involvement began as a student when he cofounded the Rutgers–Newark Black Organization of Students, which continues, and participated in the creation of the New Jersey Educational Opportunity Fund, a groundbreaking program launched in 1968 that helped to transform Rutgers–Newark into one of the most diverse universities in the nation. He has since supported Rutgers in multiple ways, including serving on the Board of Governors and making a generous gift that established a scholarship in civic responsibility for Rutgers–Newark students.

After earning a master’s degree from Princeton University in 1971, he served as executive director of the Office of Newark Studies, a city program that Rutgers administered under Newark mayor Ken Gibson, the first Black mayor of any major city in the Northeast. Roper later held a leadership position in the U.S. Department of Commerce under president Jimmy Carter and then prominent roles for more than a dozen years at Princeton. He next had two stints directing planning and policy at the Port Authority of New York and New Jersey, and founded the Roper Group, a firm that has aided organizations such as the Pew Charitable Trusts. He also was a senior fellow at the Nelson A. Rockefeller Institute of Government of SUNY for 10 years.

Roper grew up in Brunswick, Georgia, under Jim Crow laws. Even though she had attended college, his mother was a domestic worker and his father was a plumber’s assistant, prohibited from holding a plumber’s license. After attending college in West Virginia, Roper visited relatives in Newark and decided to move there. He arrived on his 20th birthday, landed a job as a salesperson in a Sears store, and transferred to Rutgers–Newark.

Two years later, he was a rising senior in July 1967 and was appalled to witness police and military suppression of protestors of racial injustice in Newark that killed 26. “We don’t call it the riot—we call it the rebellion,” Roper says. “The impact of the rebellion on me was monumental.” He says it sparked his “desire to make a difference, to have an impact, and to do things that would help reduce the marginalization of people of color.”
—Sam Starnes GSN’04

“It’s interesting how your life turns on small things,” says Brian Reilly. For him, the small thing was a Rutgers engineering course on construction estimating and planning. “The professor saw that I liked it and said, ‘You should look into this company called Bechtel.’” For more than four decades at Bechtel, Reilly ENG’80 led the design and construction of some of the world’s most complex megaprojects, including a radiological- and chemical-waste treatment plant and a uranium processing facility built to replace Manhattan Project-era infrastructure. He had a hand in other clean energy-related projects, such as Georgia Power’s Vogtle plant, which, upon completion at the end of 2023, will be the largest nuclear plant in the United States, producing enough energy for more than half a million homes. “If you look at my career, I’ve done many different things, but it was always with the goal of doing something that’s not ordinary,” Reilly says.

Growing up in Toms River, New Jersey, Reilly considered a career in architecture after graduating from high school but soon found his calling in the Rutgers engineering program. “I had always liked taking things apart and putting them back together,” Reilly says. Still, he admits to being a lone wolf in college and realized years later that it was the hard way to go through school.

When it came time to lend his philanthropic support to Rutgers, Reilly remembered this experience. “If you look at the kinds of things that my wife, Stacey [DC’80], and I support, it’s things to help students take the next step in their career and get the support they need to succeed.”

The Reilly Douglass Engineering Living-Learning Community is an example, providing first-year women engineers an opportunity to live together in a structured learning environment that includes alumni mentors, tutors, and professional development programs. “As a high school teacher, Stacey saw firsthand the smart, technically savvy young women who didn’t pursue engineering because they thought the hurdle was too high, with it being a male-dominated profession,” Reilly says. “And I saw it daily at Bechtel as we tried to get women into leadership roles. I believe this program can really impact that.”

In the first 10 years, more than 250 students have come through the program, a partnership between Douglass Residential College and the School of Engineering, and 98 percent have received their engineering degrees. Helping students live up to their potential is Reilly’s way of paying forward his Rutgers experience. “The four years I spent at Rutgers had such a profound influence on me—not just engineering, but how I approach life,” he says. “When you go through something that’s that impactful, it really leaves a mark on you. And, to me, that mark is scarlet.”
—Sean Downey