Rutgers Alumni in the Media 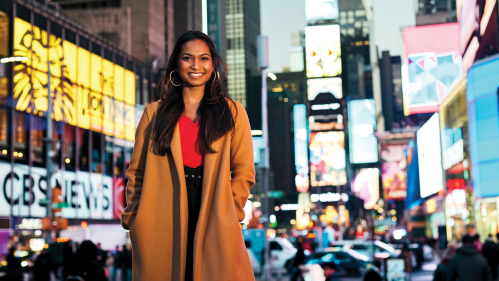 Alumna Erica D’Costa, an associate producer for CBS Mornings, was part of a team that won an Emmy Award in the category of Outstanding Live News Program. She was photographed in Times Square.
Photography by Jonathan Kolbe

Meet the young graduates making their marks in the worlds of TV, social media, radio, and publishing.

Producing Emmy-Winning TV for Millions
When news broke about the school shooting in Uvalde, Texas, Erica D’Costa and her team from CBS Mornings rushed from the network’s New York broadcast center and jumped on a plane. D’Costa SC&I’19, an associate producer to anchor Tony Dokoupil, helped report and edit a story about the massacre of 19 children and two adults in May 2022 that included an interview with a 10-year-old victim’s stepfather who wept on the air as he recounted seeing his little girl for the last time. “It was devastating,” D’Costa says, “but it was necessary so that people understand what is happening in our country. It was important to personalize the story and to hear from the parents and hear from the families and hear from the community what their raw feelings were.”

D’Costa and her coworkers were thrilled in September when CBS Mornings won a 2022 Emmy Award for Outstanding Live News Program, one of its most prestigious categories. The show reaches an audience of three million viewers daily. “Millions of people are waking up to these stories as they make coffee,” she says. “These words are having an impact.” D’Costa, who was born in India, came to the United States as a child and grew up in Woodbury, New Jersey. In college, she wasn’t sure she wanted to pursue a television career, but that all changed after taking “Introduction to Media,” a class at Rutgers University–New Brunswick taught by Steven Miller, a professor of professional practice and director of undergraduate studies at the School of Communication and Information, who encouraged her to shoot for the stars. She joined CBS as an intern in the fall of her senior year and then joined CBS Mornings full time, four months before graduating. After winning the Emmy, D’Costa reflected on her rapid rise in a LinkedIn post, written just before her 24th birthday, which received more than 560,000 impressions. Her post describes how just three years earlier she was eating Ramen noodles and nervously hoping to find a job. “I love opportunities to help students,” says D’Costa, who returns to Rutgers to encourage undergraduates. “I was in their position just a couple of years ago.”
—Sam Starnes GSN’04

A Missing Voice in the Media
Ameer Al-Khatahtbeh was a sophomore studying journalism at Rutgers University–New Brunswick when he sought to publish an article about the Muslim travel ban implemented by then-president Donald Trump in 2017. “I realized there was no mainstream media publication for the Muslim community,” says Al-Khatahtbeh SC&I’20. The social media-savvy student scooped up the handle @Muslim on Twitter and Instagram and attended a workshop on how to start a publication. In 2019, he launched Muslim.co, an online news and lifestyle media publication geared toward Gen Z and Millennial Muslims, which became a full-time job when he graduated. His publication since has amassed a huge following on multiple channels, including 1.8 million on Instagram. His success landed him on the Forbes “30 Under 30” list of achievers and earned a grant from the Knight Foundation. He opened a studio in Jersey City, New Jersey, where his team films videos that receive up to 8 million views a week on Snapchat. Some might be surprised by the rapid growth of his audience, but not Al-Khatahtbeh. “People forget that Muslims make up close to one-third of the world’s population,” he points out.
—Shelby Vittek GSC’16

High Production Value
Growing up in Monmouth Beach, a New Jersey shore town with only 3,200 residents, Mary McGowan dreamed of reaching big audiences. As an associate producer for branded content at Condé Nast Entertainment—a studio and distribution network that drives an average of one billion monthly views—she is living that dream. McGowan SAS’16 works on projects for a wide range of clients, such as helping to produce a video featuring musician Sen Morimoto. “I’m learning to work with huge clients to produce content alongside them,” McGowan says. After a brief stint at The Daily Targum while an undergraduate at Rutgers University–New Brunswick, she landed an internship with the head of casting for the Food Network’s Chopped. She then did projects for MTV, The History Channel, and the Food Network’s The Kitchen, where she honed her skills in scriptwriting and talent management. McGowan, who double majored in journalism and media studies and English and minored in entrepreneurship, said her education continues to benefit her at Condé Nast. “I’ve used so many skills that I learned at Rutgers.”
—Shelby Vittek GSC’16

Telling the Stories of Health Inequity
As a health equity fellow at WHYY, Philadelphia’s NPR and PBS affiliate, Marcus Biddle reports on people facing health disparities. You can hear his stories on the national weekly NPR show The Pulse, read them online, and watch them on Making Space for Black Health, a multimedia series. “The job I have now is a privilege,” says Biddle CCAS’15, who grew up in Pennsauken, New Jersey, near Rutgers University–Camden, where he cultivated an interest in journalism while earning a degree in urban studies. “Basically, all it takes is to be naturally curious, to listen, to write, to be sensitive about the topic at hand, and to create a story about it.” His pieces have covered mental health for kids, a doula collective, and the history of marketing menthol cigarettes to Black communities. Although his fellowship is a one-year gig, he plans to continue reporting on inequities for years to come. “One of my goals, every day,” he says, “is to make sure that whoever is out there and feeling underrepresented, I’m helping to tell their story.”
—Molly Petrilla

TIME Is on Her Side
Just weeks after graduating from Rutgers University–Newark last spring with a journalism degree, Solcyre Burga found herself in the thick of things at Time magazine. In her new job at the venerated publication, she has been splitting her time fulfilling two demanding tasks: fact-checking every article appearing in the magazine and writing breaking news stories—“quick-turns” or “explainers”—ranging from Hurricane Ian to Queen Elizabeth’s death. “My association with Time definitely gives me a vantage point when it comes to seeking interviews,” says Burga NCAS’22, the daughter of Peruvian immigrants who was the first in her family to graduate from college. She benefited from participating in the Rutgers Future Scholars program, and an internship led to her new position. “There are plenty of amazing opportunities and people to meet and work with. It was intimidating at first, for sure, but  eventually I got the hang of it.” Burga originally wanted to pursue a degree in public policy, but her journalism professors encouraged her to become a reporter, writing from personal experience as inspiration. Clearly, they pointed her in the right direction.
—Carrie Stetler

Broadcast News
Joshua Hoyos grew up glued to the family TV, watching one big news story after another unfold—from the Columbine school shooting to 9/11 to the wars in Afghanistan and Iraq. “My mom would argue that even before I recognized what TV news was, I was already hooked on it,” says Hoyos NCAS’14, who in July was named New York bureau chief for ABC News. “It was one of those things that I was mesmerized with as a very small child.” While still a Rutgers University–Newark undergraduate majoring in journalism, he interned at Good Morning America and then joined the network full time. He has risen through the ranks over 10 years at ABC News to work on major stories including Hurricane Maria, the COVID-19 pandemic, and the national racial reckoning. As the New York bureau chief, he is responsible for leading news teams throughout the eastern United States. “It could be a hurricane one week to anything else under the sun,” he says. “You wake up every morning, you fly by the seat of your pants, and you try to deliver the best news you can.”
—John Chadwick