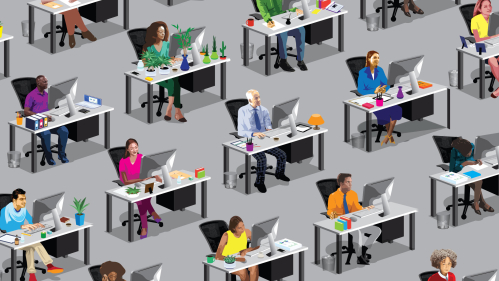 When much of America was, by and large, sent home in 2020 at the start of the COVID-19 pandemic to conduct their jobs as best they could, the relative success of the new working arrangement raised a fundamental question: do employees really have to be in an office to perform their jobs well? For most, working from home highlighted the dynamics, both good and bad, of their formal workplace. What are the conditions for ensuring employees are productive? Why are managers and coworkers behaving the way they do? Isn’t there a better way? With many employees now returning to the workplace, should any changes remain in place?

The subject of the work environment has long been uppermost on the minds of professor Rebecca Greenbaum and associate professor Nichelle C. Carpenter in the Department of Human Resource Management at the Rutgers School of Management and Labor Relations. They teach about and research counterproductive workplace behavior and lend their expertise to the university, the media, and academic articles on the subject.

RUTGERS MAGAZINE: In a recent study, you cite elements of dysfunction in the workplace that typically appear in three areas and, if unchecked, spread quickly: the quality of leadership, the effectiveness of human resources departments in hiring and establishing best practices in the workplace, and the attitudes of employees.

NICHELLE C. CARPENTER: Leadership matters because leaders serve as role models of appropriate workplace behavior. If units are led by an ethical leader, it sends a strong signal that such behavior is expected and, perhaps, rewarded. These units would be less likely to engage in dysfunctional behavior. Unfortunately, the same logic is likely true if units are led by an abusive leader because his or her actions are apt to send a strong signal that these negative actions are unlikely to be punished. Employees may be more likely to engage in dysfunctional behavior, even in response to the abusive treatment they may receive from their leaders or colleagues, or both.

We found, too, that the policies in place for the organization can play a role in dysfunctional behavior. Organizations that used high-quality human resources practices—using rigorous practices to hire and train new talent, using effective compensation and performance management strategies—were associated with less dysfunctional behaviors in units.

Finally, workers often have their own perceptions of the workplace—their supervisors, fairness, how much they like their job—and are likely to communicate with one another to make sense of how others perceive the workplace. Employees may develop a shared sense of how they perceive or feel about the organization. When the shared attitudes are negative, they may demonstrate behavior as a means to act out those feelings.

RM: Counterproductive or other dysfunctional behavior, you reveal, is more common with work teams that have an abusive supervisor and less common among those led by an ethical or charismatic one. Can you cite examples of both types of supervisors and how their behavior manifests itself?

In comparison, charismatic leaders often lead with inspirational motivation and are looked up to by their employees because of their positive messages of how to succeed in the organization. Ethical leaders lead by example and by communicating and making decisions that uphold appropriate conduct. They ask, “What is the right thing to do?” when making decisions, and they consider more than just results when leading employees. They are also mindful of adhering to procedures that promote good behavior when working toward high performance and other important organizational outcomes.

RM: What are subtle forms of bullying and abuse, and how should employees be trained to recognize them?

NC: The unfortunate reality of these behaviors is that they may be intentionally ambiguous—“Did they really mean to ignore me?”—and can create more uncertainty for employees on the receiving end, compared to unambiguous dysfunctional behavior. Research suggests that focusing on helping workers to identify when their own behavior could be harmful (even if unintentionally so) is likely a better strategy for dealing with these behaviors.

RM: Can you explain how a supervisor’s abusive behavior is in turn modeled by employees in their interactions with one another?

RG: Employees typically look to supervisors as credible sources of information for how one should behave to be successful in an organization. If the supervisor models poor behaviors, such as abusive supervision, employees may conclude that hostility and aggression are appropriate for accomplishing work and influencing others. Abusive supervision may thus spiral out of control as employees model aggressive behavior toward coworkers.

NC: Workers expressing dysfunctional behavior toward one another could be a reflection that this behavior could be displaced: it is less likely that workers would engage in abusive behavior toward their own supervisors and more likely that they would find ways to take it out on others or on the organization itself.

RM: Dysfunction, you indicate, is also more prevalent in companies that make hiring decisions based more on gut impressions rather than structured interviews and best practices for evaluating talent.

RM: The study also found that organizations that follow best practices for training and performance management are much less likely to have widespread dysfunction.

NC: The training and development offerings that make up high-performance work systems are intended to help workers gain the desired skills, knowledge, and competencies to do their jobs effectively. When workers do not have adequate training on the organization’s standards, it creates the opportunity for workers to deviate from such standards. This also relates to performance management, in that important components of someone’s job should be evaluated regularly so that workers receive feedback, get the opportunity to improve, and face the consequences for unsatisfactory or poor levels of performance. If workers are engaging in undesired behaviors, performance management systems can help managers provide consequences for dysfunctional behaviors, and they help to communicate to workers that such behaviors are not tolerated.

RM: In another one of your studies, you maintain that an organization obsessed with a bottom-line mentality often comes at the expense of ethics.

RG: Most people think of the bottom line as outcomes tied to the organization’s profitability (performance). When a bottom-line mentality exists, people become so focused on the bottom line that nothing else matters. Boeing executives were accused of rushing the production of their 737 Max jets because they were emphasizing money over safety. An administrator at a New Jersey hospital supposedly kept vegetative transplant patients on life support to fulfill quotas of survival rates that were tied to rewards.

Although a bottom-line mentality is usually tied to profits, organizations sometimes stringently and exclusively focus on other bottom-line metrics. Wells Fargo was under fire last year because it appeared that it was conducting fake interviews to give the appearance of having supported a diverse applicant pool. The company may have had a bottom-line mentality for diversity, willing to do whatever it could, including behaving deceptively, to give the impression of promoting diversity.

RM: A detriment to employee morale may be the perception that, one, their work is not sufficiently appreciated by management and, two, that management doesn’t really understand the demands of many positions. How do employees thus spread dysfunction in the workplace?

RG: Gossip could be one way that employees spread dysfunction. They may badmouth leadership as being unsupportive and out of touch with the reality of their jobs. This could create an “us against them” mentality whereby employees collectively resist their leaders, but all the while, the employees may feel more bonded because they share the leader as a common enemy. Dysfunction could also occur in the form of job neglect and social withdrawal. Employees may feel frustrated and, therefore, may directly fail to complete core aspects of their jobs.

NC: In addition, when workers have this collective sense, they may band together to “work smart and not hard,” which was termed the “soldiering” phenomenon: workers collectively decide to work less hard. There may also be coordination to keep fellow employees in line with this agreement by using bullying or other dysfunctional behaviors.

RM: During the pandemic, when most white-collar workers worked from home, they demonstrated that they could fulfill their work obligations. What bearing did this realization have on the dynamics of workplace dysfunction, both during the pandemic and now that employees have returned to the physical workplace?

RG: It will be a while before we have a fuller picture of how and why working from home versus the office affects workplace morale and overall productivity. On the surface, I believe it may be true that employees appreciate having more work-life balance and being entrusted with the autonomy of working more independently. However, leaders may not have as clear a picture of what employees are doing at home, and in some cases, coming together in the office could be better for morale-building because of the psychological and emotional benefits of human-to-human connection.

Organizations are turning toward hybrid work models that they hope will provide a balance between work-life satisfaction and the vibrancy and engagement of coming together in a physical location. But this approach seems too new to gauge its effectiveness. It seems like a step in the right direction, but it does require leaders to give more forethought to when employees should come in. It may not make sense to come to the office just to conduct Zoom calls, but it’s probably a good idea when work is complex, requires creativity, and there is just a need for colleagues to feel a bit closer interpersonally.

NC: There have been suggestions that some workers who were subjected to dysfunctional behavior pre-pandemic were able to create better boundaries and protection from the behaviors in the transition to work from home. This seems to be because interactions were restricted to work-related topics or meetings, with little need for other interaction. However, it is just as plausible that abusive supervisors have been just as abusive in virtual meetings as in face-to-face meetings.

RM: The pandemic was also an eye-opener for employees, affecting their perception of an appropriate work-life balance.

RG: I teach undergraduate organizational behavior. My students have expressed a strong preference to work for employers who provide remote-work flexibility. Over the last couple of years, the economy has produced a shortage of workers, so young graduates may have been successful in choosing companies that allow them to work from home (at least some of the time). It’s hard to tell if this employee power will remain as the economy changes.

NC: In addition to desiring remote-work flexibility, my students are more attuned to their mental health needs, physical health, and overall well-being, and they want to work for employers who value and provide for these things as well. The preferences differ across students, but the trend seems to be a preference for organizations that prioritize work-life balance so that workers can structure their lives to support their well-being in the way they see fit.