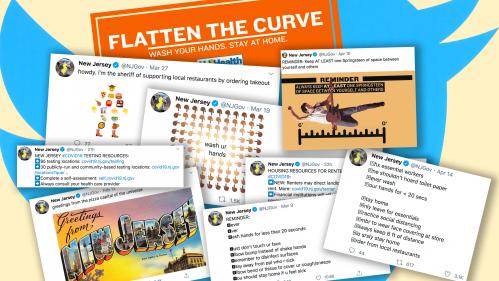 After graduating from Rutgers University–New Brunswick last year, Megan Coyne took a position as a digital assistant in the office of New Jersey governor Phil Murphy, helping to manage the state’s official Twitter account, @NJGov. In dispensing government information, Coyne SAS’19 and her boss, Pearl Gabel, have become a two-woman booster club for the state, never more so than during the COVID-19 crisis. The duo uses humor to send serious messages. One tweet proclaimed: “Howdy. I’m the sheriff of supporting local restaurants by ordering takeout.” “REMINDER: Keep AT LEAST one Springsteen of space between yourself and others” was the advice of another, accompanied by a cutout of the Boss lying alongside a six-foot scale. The tweet garnered a retweet from the New Jersey native himself.

Coyne and Gabel had earlier developed a huge following because of their saucy retorts to tweeted barbs about the state’s perceived shortcomings—the usual stereotypes from out-of-staters about New Jersey being the “armpit of America,” for instance. They have responded with a brash sense of humor about their home state with memorable one-liners and memes. “Armpit what?” challenged one of their tweets, accompanied with an arresting video of the Jersey Shore. As another user commented, “This is the best twitter account and I’m not even from New Jersey.” And now they have a captive readership as they root for New Jersey and counsel residents to stay safe as the state rides out the pandemic.