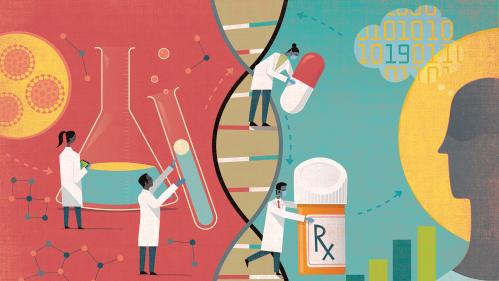 Think about the Hoover Dam. Imagine that its vast store of water has no sluice gate allowing it to flow to where it’s needed. Imagine that some of the water manages to trickle out or occasionally overflow, but much of it remains unused, its potential unrealized. That immense reserve of water is the metaphor Joachim Kohn uses to describe the potential health care discoveries at America’s great research universities, Rutgers included. The discoveries are being made, says Kohn, Board of Governors Professor of Chemistry at the School of Arts and Sciences at Rutgers University–New Brunswick, but many have no easy route to the marketplace, where they can be accessed by the practitioners and patients who desperately need them.

But that’s changing, thanks, in part, to two grants given to Rutgers from the National Institutes of Health (NIH) that are helping to revolutionize the field known as translational medicine. Sometimes referred to as “bench-to-bedside,” translational medicine addresses moving discoveries quickly and efficiently from the lab to the commercial marketplace. For patients and practitioners, that means swifter access to the very latest treatments for the illnesses that upend human lives, from cancer to COVID-19.

There is nothing more bench-to-bedside than the Rutgers Institute for Translational Medicine and Science. Founded in 2015, it’s a Rutgers-led alliance of universities and health care institutions, including Princeton University and New Jersey Institute of Technology (NJIT). Its purpose, in the words of its mission statement, is to “propel clinical and translational research into transformative approaches to improve the health of individuals, communities, and populations in New Jersey and beyond.” Under the inaugural directorship of Reynold Panettieri, who is also vice chancellor for translational medicine and science, the Rutgers institute has worked to accomplish the undertaking in virtually every way imaginable: partnering with industry, developing a workforce of investigators and researchers, fostering interdisciplinary science, and fast-tracking the development of new therapeutic and diagnostic approaches. Now, a $29 million grant from the NIH is helping to fund a clinical and translational program known as NJ ACTS (New Jersey Alliance for Clinical and Translational Science), allowing the institute, in Panettieri’s words, “to take our mission statement and increase it by 10 to 15 times.”

Significantly, it will allow for more efficient and targeted clinical trials, the backbone of translational medicine and key to ascertaining the safety and efficacy of new medicines and medical technologies and to obtaining approval from the Food and Drug Administration (FDA) prior to commercialization. Yet it’s often difficult to find appropriate patients willing to enroll in the trials and to ensure that underrepresented populations are included—especially important because medications may have different effects on different segments of the population. The grant has allowed the institute to build a database of potential participants and, says Panettieri, “to reach populations that are ignored in clinical trials,” sometimes through what he calls “boots on the ground”: physically going into communities not widely represented in clinical trials and finding participants in the places where residents are likely to congregate, from houses of worship to barbershops.

The grant is also helping to create a workforce focused on translational medicine, including a new generation comprising junior investigators and postdoctoral and graduate students, and a cadre of established scientists not previously engaged in translational medicine. Each scientist will receive a pilot grant allowing him or her to segue into translational medicine, with the proviso that they work with either Princeton or NJIT. “What we’re doing here,” says Panettieri, “is forging new collaborative science projects across the state and building a real platform for discovery, implementation, and dissemination of information.”

NJ ACTS will deepen Rutgers’ partnership with Princeton and NJIT. “Princeton has some phenomenal abilities in artificial intelligence, machine learning, epidemiology, and molecular biology that are complementary to our expertise,” Panettieri says. “NJIT focuses on development and new products in the data science space. What they don’t have, which we do, is patients and hospitals.” Rutgers, he notes, “is the exclusive purveyor of access to patients” to both partner institutions. In enhancing the partnership, the grant creates a translational research powerhouse. “This is an absolute game-changer for all of New Jersey,” Panettieri says.

Seventeen years ago, after the illness known as Severe Acute Respiratory Syndrome (SARS)—which, like COVID-19, is caused by a coronavirus—reached epidemic proportions, laboratories geared up to learn more about coronaviruses and develop vaccines against them. But as the epidemic faded into memory, much of the funding also dwindled. That’s the kind of missed opportunity that a $4 million grant from the NIH aims to prevent. The grant supports a new program, Rutgers Optimizes Innovation (ROI), over four years and establishes Rutgers as one of five sites across the country designated as Research Evaluation and Commercialization Hubs (REACH). Headed up by four principal investigators—Panettieri; Kohn; Steven Libutti, director of Rutgers Cancer Institute of New Jersey; and Renata Pasqualini, chief of the Division of Cancer Biology at the Cancer Institute—the hub will identify promising research within the university and offer researchers the aid and education they need to help bring their inventions to market.

Each year, the NIH invests $25 billion in research. The REACH program, says Kohn, grew out of the NIH’s recognition “that they’ve sponsored billions and billions of dollars’ worth of research over the past decades but there was no pipeline to move that research into the real world.” REACH is helping to create that pipeline, Kohn adds, “which represents a huge, seismic shift.”

To identify the research most likely to result in marketable products, the hub works with a variety of reviewers, including “people from industry who’ve been in the trenches, actually bringing products to the marketplace,” says Yair Harel, Rutgers’ executive director of New Ventures and Commercialization Funding. The NIH is the final arbiter of whether research is green-lighted for commercialization. “Their input, through  a pool of experts that look at the application and provide us with input about patent, regulatory, reimbursement, and manufacturing issues, is invaluable in determining the potential success of the technology,” Harel says. Absent this process, Libutti notes, “very promising research can hit that so-called ‘valley  of death,’ the area where it’s very hard to make the connections or obtain the resources and expertise needed  to move from scientific discovery to commercialization.”

The hub also offers education to researchers about the process and benefits of working in translational medicine, holding boot camps for interested scientists that pass along information on everything from patent law to FDA procedures. Pragati Sharma GSNB’15, manager of HealthAdvance, ROI’s platform for application solicitation, processing, and program management, points out that an important goal of the REACH program is to make innovators aware that commercializing their technologies benefits the public.

Finally, notes Libutti, Rutgers’ designation as a REACH hub puts the university in a rarefied group of universities that have three powerful grants: a Clinical Trial Support Grant, a Cancer Center Support Grant, and the REACH grant. The triad gives Rutgers unparalleled “firepower,” he says, “to support cancer research on a national stage and drive it more effectively toward commercialization.”

And that, Libutti says, “really puts us at the forefront and on the cutting edge of translational science.”