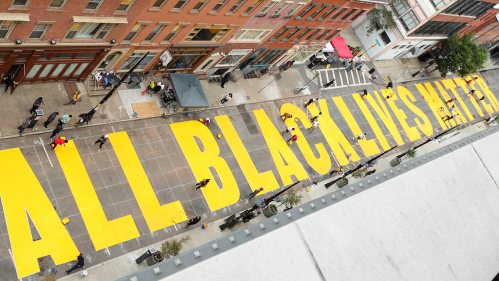 Among the artists contributing were students in the graphic design program in the Department of Arts, Culture, and Media at Rutgers–Newark. The collaboration reunited community members in a city and an art scene hard hit by the COVID-19 pandemic, and Chantal Fischzang, an assistant professor in the program, organized 40 students to work with 40 local artists to draft and outline the mural’s letterforms. The Murals for Justice Newark were designed using a typeface called Martin, named for Martin Luther King Jr. It is inspired by the 65-day Memphis sanitation strike of 1968 and the signs held by striking workers proclaiming I AM A MAN. King was assassinated while in Memphis to support workers.

“We brought Newark, and our nation, one step closer to the long-deferred dream of racial justice,” says Salamishah Tillet, the Henry Rutgers Professor of African American and African Studies at Rutgers–Newark and director of New Arts Justice at Express Newark, an arts and activism incubator. Her words appear in a video documenting the palpable energy and physical transformation of the two streets. The video was created by DreamPlay Media cofounder Igor Alves NCAS’04, GSN’08, an award-winning filmmaker who promotes Newark’s social entrepreneurs and artists.

View the video online at dreamplay.tv/upgraded/murals-for-justice.