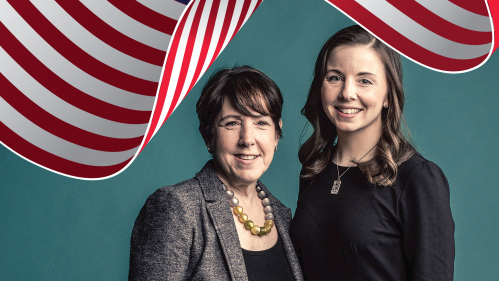 Debbie Walsh, left, is the director of the Center for American Women and Politics, the nation's preeminent source for scholarly information about women running for public office. Kelly Dittmar is the director of research at the center, which is part of the Eagleton Institute of Politics at Rutgers University–New Brunswick.
Photography by Bill Cardoni

The 2020 election provided its share of drama. What was less of a surprise, as recent history is proving, was the number of women who ran for public office, leading to another historic year for American women participating in politics. A record-breaking 583 women, representing both major political parties, ran for the U.S. House of Representatives—up from the high of 476 in 2018. The election also marked more firsts for women candidates, most notably the first Black woman and first South Asian-American to run for vice president on a major ticket; a surge among women GOP candidates; and the largest number of woman versus woman races, 51, in the nation’s history.

Debbie Walsh and Kelly Dittmar, two oft-quoted scholars with the Center for American Women and Politics (CAWP) at Rutgers University–New Brunswick who were interviewed for this story in September, are encouraged by the statistics, which represent more glass ceilings being shattered. The pair considers Kamala Harris’s vice presidential run nothing short of a watershed moment that further will soften the ground for women presidential candidates in the future.

“Nominating a woman for vice president shouldn’t be seen as revolutionary, but it is. However, I don’t think we will see an all-white-male ticket on the Democratic side again, which makes me feel hopeful,” says Walsh, the director of CAWP. “We can’t overstate the importance of this moment particularly for Black women—especially young Black women—and the recognition of the importance of Black women, who have been the backbone of the party.”

Despite ground gained by women in the last decade, they occupy only a quarter of congressional seats, according to CAWP data. The results of the 2020 election aside, Dittmar and Walsh say there is still much work to do to ensure women are represented equally at all levels of government systems. “There is disappointment that six women were running in the presidential primary and ultimately an older white man was at the top of the Democratic ticket,” says Dittmar, director of research at CAWP and an associate professor of political science at Rutgers University–Camden. “You’re seeing a lot of us grappling with that.”

“Women are still seen as a bit of a novelty,” says Walsh. “The fact that we are celebrating firsts and keeping track of woman versus woman races speaks to that. When is the last time you heard, ‘Oh, it’s going to be an all-male contest!’ ” So, when will the political playing field be level? When women running becomes unremarkable, Walsh and Dittmar say, and when gender-specific questions, especially those related to electability, go unasked. Achieving this equity requires stronger support for recruiting and financially backing women candidates, says Dittmar. And the barriers that uniquely burden many women on the campaign trail and in political life, such as the need for child care, should be identified and removed.

“At the same time, a strong case needs to be made that it’s worth it,” says Dittmar. “You can create all the access women need to run, but if they think politics is ridiculous and that you can’t get anything done, they won’t run.”

In 2020, not only were more women taking the political plunge, but those who did were more diverse in ethnicity, sexual identity, education, and profession than ever. And they ran more authentic and unapologetic campaigns, building on a trend that gained traction in 2018. “The question was, ‘Is 2018 going to be a one-off?’ ” Walsh says. “But in 2020, things once seen as vulnerabilities were seen as strengths.”

In 2018, instead of shying away from the subject of motherhood, women talked about the strength and skills they gained as mothers, with a few even nursing their infants in campaign ads. They spoke about coming from homes disrupted by violence or shared their experiences with homelessness, addiction, and financial insecurities. Their straight talk resonated with voters, says Walsh. Dittmar believes this shift in women’s campaigning styles has occurred over time, but she credits Hillary Clinton’s 2016 bid for the presidency and arrival of the #MeToo movement in 2017 with upending the way women run today.

“When Hillary Clinton ran for president in 2008, it was very much about proving she was man enough. In 2016, she ran in a way that was much more embracing of who she was as a woman and a mother,” says Dittmar. “In 2018, there was this national reckoning with #MeToo and gender equality, and women had more space to embrace it. In 2020, we saw a continuation of that.”

But that’s a narrative largely told within the Democratic Party alone, the pair points out. Unlike 2018, this year’s election included a robust slate of women running on Republican tickets, most of whom eschew identity politics. “Women Republican candidates don’t advocate for a given number of women on governing boards because to them it’s about getting the best person for the job. They are less likely to focus on being a woman and how that changes their approach,” Dittmar says. “The Republican women who ran for the House this year had a formula: they were pro-life, pro-Trump, pro-guns, and anti-socialism.”

“Thirty-six new women were elected to the House in 2018 and only one of them was a Republican. Some of what we are seeing is a response to that,” says Walsh. “They want to have a voice—a very conservative, anti-‘Squad’ voice—in the mix. They want to have more like Marsha Blackburn in Congress,” referring to the Republican U.S. senator from Tennessee who was elected in 2018.

By the same token, pollsters should stop viewing “suburban white women” as a homogeneous demographic of voters, says Dittmar. They are a varied group whose politics swing left or right depending on age, education, economics, and sexual identity. However, one bloc of women who have been reliably Democratic are Black women voters, whom Democrats have taken for granted, according to Walsh and Dittmar.

“Black women are the most dependable bloc of voters, with well over 90 percent voting Democratic in the last three presidential elections. And when U.S. Senator Doug Jones (D-AL) got elected in 2017, everyone was thanking Black women. But Black women are saying ‘stop thanking us and do something for us. Pay attention to what’s affecting our lives and our communities,’ ” says Walsh. “They want some return on their vote. Kamala Harris’s nomination was an acknowledgement of the value of Black women to the party and gave a woman of color a seat at the most powerful table.”

Now that the 2020 election is over, with both women candidates and voters having had a considerable impact on it, what’s on the horizon for women in politics in 2022 and beyond? If participation continues to rise at current rates, Dittmar and Walsh say more firsts will invariably take place—including a woman as president.