And the Queensmen Played On 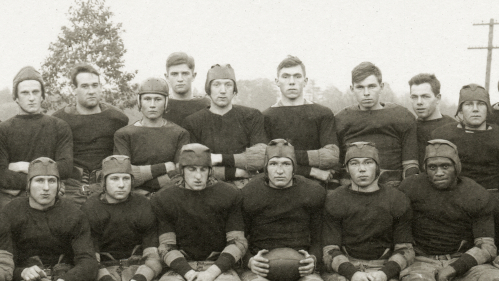 The 2020 season wasn't the first time that Rutgers football took place during a lethal pandemic. The 1918 team, known as the Queensmen and featuring All-American Paul Robeson RC1919, managed to play a full season, more or less, despite an outbreak of influenza that killed 50 million people worldwide. Compounding the 1918 health crisis was the urgency of the United States’ involvement in World War I and the need to train young Rutgers men to fight in Europe. At the start of the 1918 fall term, more than 200 students were enlisted in the war effort; the number of undergraduates at Rutgers had dropped from 513 to 286.

Despite the climate, the value of football was noted in The Targum in October 1918: “Football, more than other sports, is a military game which calls upon every faculty to the limit. Not only will athletics keep men in the ‘pink’ of physical condition and build them up to play that bigger game across the sea, but it will inspire in the entire corps as we unite to cheer our warriors.”

The Student Army Training Corps (SATC), a program introduced early in the fall by the United States War Department, affected the football team and campus life. Because of the war and the pandemic, Rutgers and colleges nationwide were suffering declining enrollments; the SATC filled the void by offering to pay student tuition, housing, and other college costs in return for which enlisted candidates drilled, attended class, and were paid as service members. Some of the fraternities were converted into barracks.

Nonetheless, the 1918 Rutgers team was one of the nation’s best, going 5-2 despite having to cancel several games and reschedule others. The Rutgers team was led by George Foster Sanford, a colorful and successful coach who arrived in New Brunswick in 1913. By 1917, Sanford had built the team into a winner. That year, the Queensmen knocked off powerhouse Newport Naval Reserves in a 14–0 upset at Ebbets Field in Brooklyn, finishing the season at 7-1-1.

Most of the players on the team—led by Robeson, who was considered a top player in college football—returned for the 1918 season. Sanford was unable to coach the first game on September 28 against Ursinus because he was recovering from the flu. He relied on three assistants to lead Rutgers to an easy win, 66–0, in an error-prone game, explained in part by Sanford’s absence during the week of practice and the game itself.

Another explanation for the sloppy play was the many players’ SATC obligation, which disrupted practices. New Brunswick in the meantime had locked down the city for a quarantine period on October 4. In the month of October alone, there were 195,000 deaths nationwide from the flu. The pandemic eventually killed 675,000 Americans and 50 million people worldwide.

The influenza took its toll on Rutgers, too. Seventy-five students were infected, with four students dying as a result. The sickened were treated at the Ivy Club, a fraternity that had been converted into an infirmary, or at New Brunswick hospitals, which had been quickly overwhelmed, as were cemeteries. In its inaugural semester, the New Jersey College for Women, now known as Douglass Residential College, closed briefly in October after more than half the students and its dean, Mabel Smith Douglass, became ill.

The pandemic had an impact on the football schedule for Rutgers. Games against Lafayette, Colgate, Fordham, and West Virginia were canceled. A game against Lehigh was postponed a week and moved to New Brunswick because of a flu outbreak in Bethlehem, Pennsylvania. Rutgers played home games against Pelham Bay Naval Station and Naval Transport Service. The Queensmen had started the season quickly, going 4-0 and outscoring opponents, 152–0. Rutgers conceded three points in a 26–3 win at Penn State on November 9, only the second game to coincide with the original schedule.

As part of an effort to help raise funds for returning soldiers, the United War Work Campaign hosted several marquee games. On November 16, five days after World War I officially ended, Rutgers played the Great Lakes Naval Base at Ebbets Field and got trounced, 54–14.

A week later, in Robeson’s final game, Rutgers lost to Syracuse, 21–0. Because of the disruption of the war and the flu pandemic, a national champion for the 1918 college football season wasn’t declared. But at least the Queensmen and their fans enjoyed a season of football.