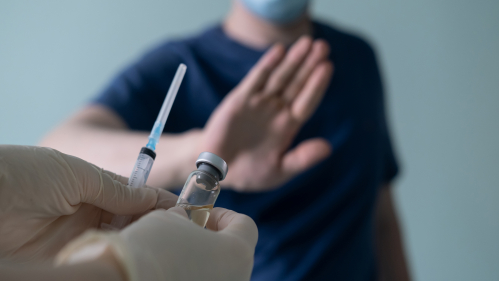 Those who remain unvaccinated against COVID-19 say their biggest concern is vaccine safety, according to a survey from a nationwide coalition of university-based researchers.

The survey was taken in June before the U.S. Food and Drug Administration (FDA) changed the emergency use designation for the Pfizer vaccine, saying the vaccine meets the high standards for safety, effectiveness, and manufacturing quality the FDA requires of an approved product.

It found that 35 percent of unvaccinated people were resistant because of health risks and side effects such as blood clots and heart inflammation and existing conditions like allergies and a history of vaccine reactions. Twenty-four percent thought the vaccines were developed too quickly to evaluate health effects, which contributed to their apprehension. Twelve percent said they do not believe COVID-19 is a considerable risk to them.

The COVID States Project asked Americans why they weren’t vaccinated, whether due to an inability to get to a vaccine site, problems with getting off work, a perception of risk, a fear of needles or a lack of trust in institutions and uncertainty regarding the risk the vaccine poses.

According to the data, many people lack trust in institutions—like the White House and Centers for Disease Control and Prevention, among others—that oversee vaccines safety. The general lack of trust in the vaccines and relevant institutions was the third most common reason that 15 percent of people chose not to get vaccinated. Four percent said they do not trust the government, strongly associated with low vaccination rates in some states.

Ninety-two percent said they trusted hospitals and doctors the most, followed by scientists and researchers with 86 percent. The most publicly facing entities and people — such as Anthony Fauci (66 percent), the White House (63 percent), the news media (45 percent) and social media (33 percent) — had the lowest levels of trust.

“In this report, we see a crucial and important finding in the declining trust in institutions among Americans,” said lead author Katherine Ognyanova, an associate professor of communication at Rutgers’ School of Communication and Information who is part of a coalition of researchers from Rutgers-New Brunswick, Northeastern, Harvard and Northwestern Universities. “Concerns about the safety and effectiveness of the vaccines are linked to a lack of confidence in messages coming from the government, health officials, and the mainstream media. Lack of trust is a more important challenge at this point than the remaining logistic problems that people experience.”

The researchers polled 20,699 Americans from all 50 states and the District of Columbia between June 9 and July 6.

The COVID States Project is a joint project of the School of Communication and Information at Rutgers University-New Brunswick; the Network Science Institute of Northeastern University; the Shorenstein Center on Media, Politics and Public Policy of Harvard University; Harvard Medical School; and the Department of Political Science and Institute for Policy Research at Northwestern University.

The consortium has released 63 reports and charted public opinion related to COVID-19 topics since April 2020. It is the largest ongoing national survey tracking people’s opinions and behavior during the pandemic.